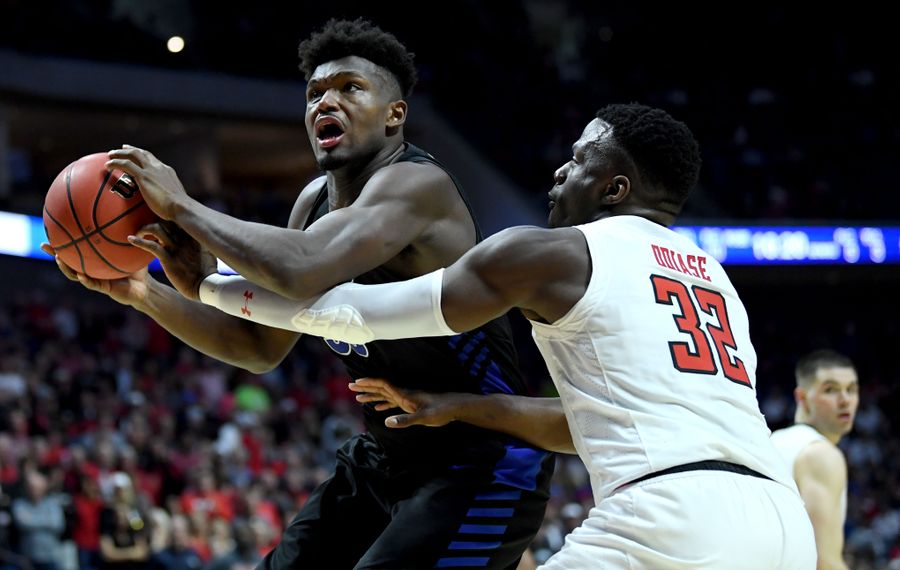 The Bulls needed three games to win the Mid-American Conference tournament last weekend in Cleveland, and appeared poised to make a run in the NCAA Tournament.

Then Texas Tech got in the way. Specifically, Texas Tech’s defense, which led the third-seeded Red Raiders to a 78-58 victory against the sixth-seeded Bulls on Sunday at the BOK Center.

UB finished with a season low in points and was unable to create much of a presence in the paint, scoring only 18 points inside, including eight points directly under the basket to Texas Tech’s 14. The Bulls also finished 9 for 27 on 3-pointers, but went only 3 for 10 in the first half.

UB entered the game at No. 5 in the nation in scoring at 84.9 points per game and were held almost 27 points less than their average. Texas Tech was holding teams to an average of 59.3 points per game.

The only answer the Bulls had early on was Nick Perkins, who scored UB’s first eight  points and 12 of its first 16, and finished with a team-high 17 points and 10 rebounds.

“They were big and strong,” Perkins said. “(Texas Tech forward) Tariq Owens has a wing span of probably 7-2. ... I just use my size and body and get into the lane, take away their shot blocking. Really. A lot of the shots, we missed. ... A lot of the shots we usually make, tonight it just didn't fall.”

The main thing the Red Raiders wanted to key in on, in order to shut down UB early, was limiting the Bulls’ transition game.

“They score a lot of points, they get out and spread and shoot the ball well,” Texas Tech coach Chris Beard said. “They have great guards, a great overall team. We're keying in on the 3-point shot, mainly, transition, and just one-on-one plays like driving. We tried to keep them out of the middle as much as we could, try to make them take tough shots and keep them off the boards. I'm glad we were able to do that for 40 minutes.”

Texas Tech makes its second Sweet 16 in as many years, and the Red Raiders will face Michigan on Thursday at the Honda Center in Anaheim, Calif. The Wolverines (30-6) defeated Florida 64-49 in a second-round game in Des Moines, Iowa.

The Red Raiders will face a name that’s familiar to local basketball fans, and one that’s become synonymous with the recent success of the Wolverines: John Beilein, who is in his 12th season at the helm of the Wolverines.

Beilein is a native of Burt who coached at Erie County Community College from 1978 to 1982, and at Canisius from 1992 to 1997. He led the Golden Griffins to the 1996 NCAA Tournament. He’s also led Michigan to national championship game appearances in 2013 and 2018, and to two Big Ten Conference tournament championships and two Big Ten regular-season championships or co-championships.

With its 91-74 win Thursday against Arizona State in a first-round game, UB became the first MAC Team to win NCAA Tournament games in consecutive seasons, a year after its upset of No. 4 Arizona in the first round of the 2018 NCAA Tournament. The Bulls also played for a spot in the Sweet Sixteen for the second year in a row.

Buffalo's 32 wins were the most in school history, and most ever by a Mid-American Conference program.

Massinburg scored 14 points against Texas Tech, and the Dallas native leaves the program as UB’s single-season leader in points scored (636), and second all-time in scoring (1,990 points).

Jeremy Harris, a senior guard, scored nine points in his final game at UB and is 18th all-time in career points (1,062 in two seasons with the Bulls).