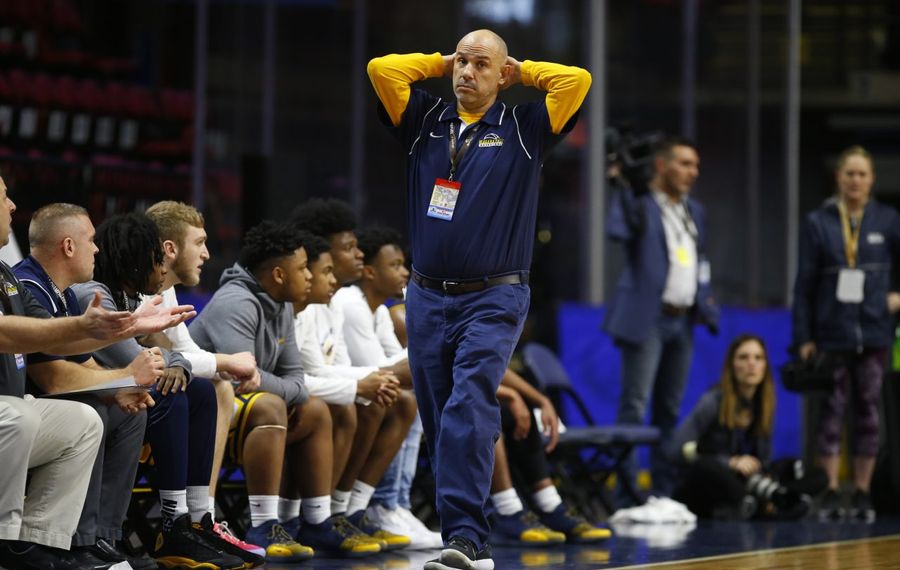 Sal Constantino still will walk the halls of Niagara Falls High School during the day.

He’ll still keep track of grades of members of the boys basketball team, making sure they are up to par so the players don't have issues moving on to college. He’ll continue to root for the Wolverines like there is no tomorrow. If they need a helping hand with something, he'll be there, too.

He just won’t be coaching during practice or games anymore.

Constantino has stepped down as coach of Niagara Falls, one of the more high-profile boys basketball jobs in Western New York, after nine seasons.

He said his reason for leaving has nothing to do with players or parents, but said a string of negative comments that he and his family have heard from various people outside the program in the basketball-crazed Cataract City.

“I’ve been out in public with my son and they’ve just walked up to me and (cursed at) me with my son there,” Constantino said. “The thing with people now ... there’s no filters. That’s worn me down.

“We’re trying to do best by the kids.”

That’s all Constantino has done since his days as an assistant under Hall of Fame coach Dan Bazzani, since his days coaching with the Niagara Falls Police Athletic League with players such as Paul Harris and Jonny Flynn.

Constantino guided the Wolverines to five Section VI Class AA championships, including the past four, and a 139-54 record, per MaxPreps tabulations. He also coached the girls program at Niagara Falls for two seasons before succeeding Giulio Colangelo as boys varsity coach after the 2009-10 season.

"He's everything that's right about Section VI hoops," Niagara Wheatfield coach and Niagara Frontier League chairman Erik O'Bryan said. "He was always about the players first and not worried about himself. ... He is going to be missed."

While most coaches keep track of career wins and losses, Constantino didn’t. He used a different set of numbers to measure success. The figures included:

-- 22: Number of Wolverines in college or have graduated from college.

-- 4: Number of seniors from this season’s Falls team heading to college.

-- 2: Number of former players in the military.

“I made the decision before the playoffs started,” said Constantino, who had told only athletic director John Contento. “I wanted the highlights on the kids. I didn’t want it to be about Sal’s last hurrah.

“I love those kids. Whatever they say Sal did for the kids during my time here, these kids have done equally and more for me.”