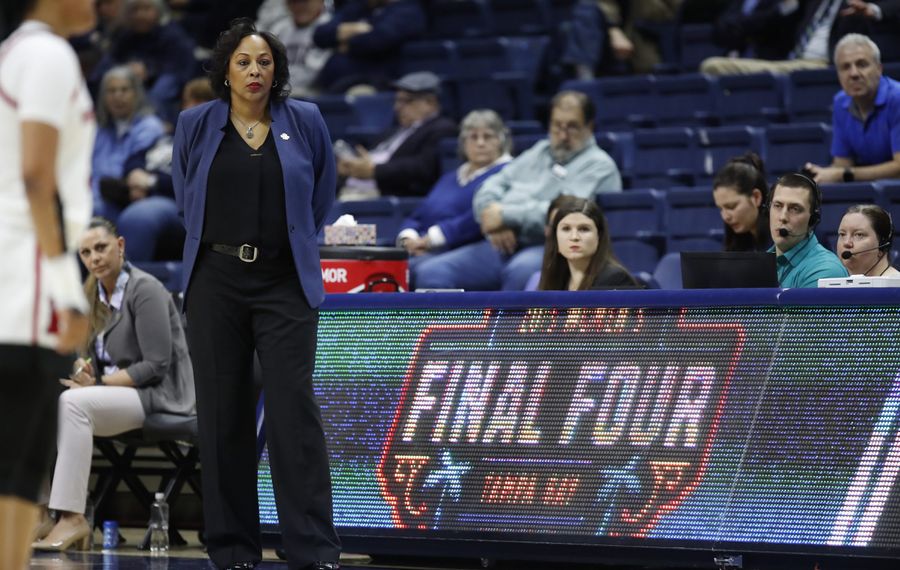 She revived Cierra Dillard’s career, turning a player who nearly chose to stop playing basketball into one of the top guards in the country.

And she knows her Bulls are headed for a buzzsaw when the No. 10-seeded UB women (24-9) face second-seeded Connecticut (32-2) in the second round of the NCAA Tournament  at 7 p.m. Sunday at Gampel Pavilion (ESPN).

“I saw a security (guard) down there and he had weapons and everything, and I asked him a question, ‘Is it illegal to kidnap players here in Connecticut?’ ” Legette-Jack said Friday night, after UB’s 82-71 victory against seventh-seed Rutgers but before UConn had even tipped off against No. 15 seed Towson, a game the Huskies won 110-61.

“And he looked me right in my eye and he said, ‘Yes.’ And I said, ‘Crap. There goes that scouting report.’

“They’re the best team ever!” she screamed. “They’re so awesome! How’d they get a two seed? I can’t stand some of those people in the committee, whoever they are!”

SCOUTING REPORT LEAKED@UBwomenshoops reveals how they planned on taking down the Huskies! 😭#ncaaW pic.twitter.com/DsyniUPJw0

The Huskies were ranked No. 2 in the final Associated Press poll after losing more than one regular-season game for the first time since the 2012-13 season, when they nevertheless won the national championship. This is their 31st consecutive appearance in the NCAA Tournament. They have advanced to 19 Final Fours and won 11 national titles in that span, and it would surprise nobody if this season makes it 20 and 12.

UConn has been among the last teams standing each season for more than a decade, having reached the Final Four in each of the last 11 seasons, six of those appearances resulting in a national championship.

Legendary UConn coach Geno Auriemma responded to Legette-Jack’s compliments — the UB coach said she’s such a fan she stopped into one of his restaurants and ordered food even though she wasn’t hungry — by calling her “one of the more intelligent coaches in the country.”

“It shows she has good taste and impeccable judgment,” Auriemma said Saturday. “I’ve had a great relationship with her since she was a high school kid and I tried to get her to come to the University of Virginia. I followed her career at Syracuse and her coaching career after that, and I really admire her, her relationship with her players and how she manages her team during the game. She’s just got a nice way about her. She’s got a great personality. I’m really flattered by the things that she said about our team and about me personally. It’s unusual when another coach says something about me that you can repeat in public.”

Collier has 20 double-doubles this season. Samuelson returned to action against Towson after sitting out the end of the regular season and the American Athletic Conference tournament with a back injury. The Huskies still rolled to a sixth consecutive AAC tournament title and improved to 120-0 against AAC opponents since joining the conference.

So if UB had actually resorted to kidnapping players, they’d have needed to grab more than one.

“Of course, we all know it will be a challenge,” UB junior forward Summer Hemphill said. “Every game is a challenge because every team wants to win; nobody really wants to lose.

"Of course, it’s UConn, but we don’t look at it as anything different from any other game. It’s another 40 minutes just like the last game. It’s another 40 minutes that we have to prove what Buffalo basketball is capable of and to showcase ourselves and what we’re capable of and tell our story, how long and how hard we have been working since the summertime. Hopefully it pays off when we go out there and use all of our energy for those 40 minutes.”

Dillard said the underdog role is nothing new.

"We’re just going out there playing Buffalo basketball, and showing that we can hang with the best in the country. It’s a blessing to be one the 32 teams that’s still playing in the NCAA Tournament. That’s anybody’s dream.

“UConn, we respect them without a doubt, they have a legendary coach, legendary kids, and they’ve had that resume throughout the years, and what they’ve been able to do for women’s basketball is very respectable, but we fear no one. We’re very confident in what we do and we’re focused on Buffalo and we’re excited for the game (Sunday). It’s just a game of basketball, they have to put the ball in the hole and we have to put the ball in the hole. We just have to see who does it more.”

“I have coached kids that are doctors now, professional basketball players and just really phenomenal women,” Legette-Jack said Saturday. “These young ladies every single day understand that they matter, they are enough, they’re good enough to be anything they want to become. And that’s the message they know on a daily basis.

“Playing against the Lakers or a WNBA team or UConn, when the ball goes up in the air you just got to be better than them for 40 minutes. All it takes is 40 minutes, and that’s our story. We might win. They might win. But they are going to get our best effort.

"We are going to always have two things we are going to be dealing with and that’s called courage and fear. Whenever you do something for the first time, if you are an adult or if you’re a kid, you’re going to have fear. A lot. Because you care so much about the success that you are trying to get. But then courage comes in and I ask our players every day, handle both of them. But when you come out of that locker room, let courage win.

For Legette-Jack personally, going up against Auriemma in the NCAA Tournament is a career highlight.

Auriemma has been inducted into both the Naismith Memorial Basketball Hall of Fame and Women’s Basketball Hall of Fame. He’s been named national coach of the year by multiple organizations more times than you can count on your fingers and toes. He’s guided the Huskies to those 11 national titles in his 33 previous seasons and helped lead the United States to three Olympic gold medals.

“I love Geno,” Legette-Jack said Friday night. “I love what they’ve done for women’s basketball. He stood for women. He stands for women. He’s done so much to grow so many women to be phenomenal women, and he can coach, man. And his team is good. And we’re going to celebrate our win against Rutgers right now, all day long, and I don’t even want to go watch them play right now, because I’m in awe of this guy. I really am. I think he’s really awesome.

“I have to give him my best effort. And we’re going to be as prepared as we can against the best team and the best coach, arguably in the country.

“I think that they are a team that’s positioned to win it, but they’ve got to go through Buffalo. Oh, God.”