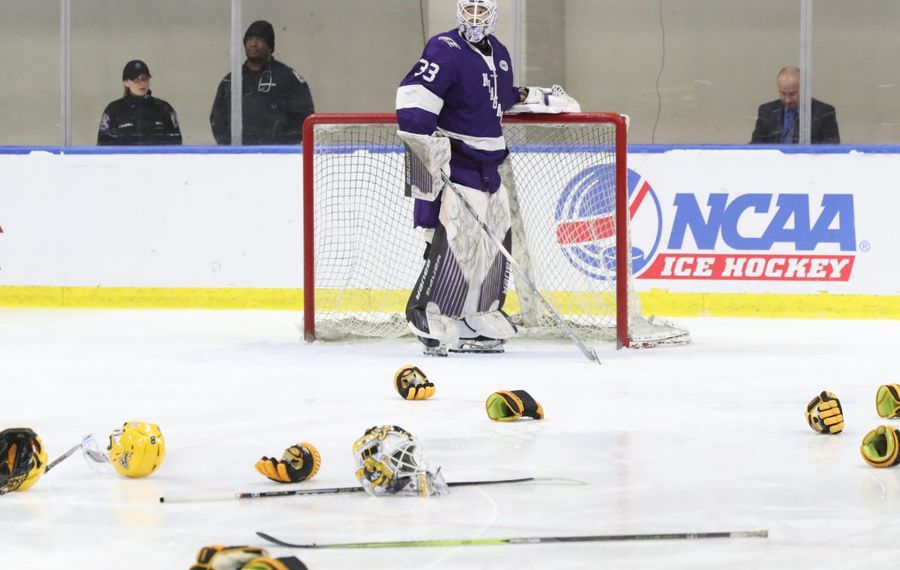 The historic run was partly fueled by a preseason ranking that was released six months ago, when Niagara University's hockey team was picked to finish last in the Atlantic Hockey Association. But the 40 games leading up to Saturday night in Harborcenter were defined by so much more.

There were the heroics of Brian Wilson, a sophomore goalie who stopped most of the team's defensive mistakes during the postseason; Ludwig Stenlund, a freshman who scored the game-winning goal in the tournament semifinal and led the team in points; and a passionate group of upperclassmen who wanted to leave a legacy they could be proud of.

While the storybook season had a gut-wrenching ending with a 3-2 overtime loss to American International College in the AHA championship game, the Purple Eagles ensured they will be remembered for more than how they were viewed by their peers before the season began.

"They were handed a mission and they achieved that mission," Niagara coach Jason Lammers said while fighting back tears. "They proved people wrong. They got the program back to where everyone wants it to be and they left a legacy."

Niagara (17-9-5) failed to reach the NCAA Tournament for the first time since 2013 because AIC winger Hugo Reinhardt scored 1:16 into overtime. However, the sixth-seeded Purple Eagles reached their first AHA tournament title game after beating Canisius, Air Force and RIT.

The Purple Eagles led for three minutes, 25 seconds in the second period Saturday night, roared back to tie the score in the third period and nearly won the game late in regulation. Five of their seven postseason games went to overtime and they went 11 games without a loss in regulation.

Though AIC (22-16-1) was also making its first appearance in the conference's championship game, it entered the week ranked 19th in the country by USCHO.com, and had won four of its previous five games.

AIC now awaits its NCAA Tournament destination when the bracket is announced Sunday at 7 p.m. The Frozen Four is at KeyBank Center on April 11 and 13.

A logic-defying goal and a controversial call helped it close the chapter on Niagara's season.

Following a near-breakaway by Niagara in overtime, AIC's Kyle Stephan collected a bouncing puck behind the Purple Eagles' net and made a backhanded centering pass to Reinhardt. Though the back of the net was lifted a few feet in the air because of a nearby scrum, Reinhardt stuffed a puck past Wilson for the game-winner and the call on the ice stood following a review.

"I thought they were stingy, but I liked some of the things we did," Lammers said. "I thought we had some good looks. Defensively, I liked our game. I thought we were hard to play against and accomplished a lot of what we set out to do."

Niagara had nine fewer shots on goal and failed to score on its two power plays, while AIC scored a pair of power-play goals, including Reinhardt's in overtime. Still, the Purple Eagles nearly completed another comeback.

Niagara's Kris Spriggs, a junior winger, tied the score, 2-2, with 13:44 remaining in regulation with a wrist shot from the high slot, awakening a crowd that was silenced by an unusual ending to the second period.

With time expiring, AIC winger Martin Mellberg unleashed a slap shot from the right-wing faceoff circle. When the puck left the blade of Mellberg's stick and hit the glass above the end boards, the building went quiet except for the celebratory yelling from AIC's bench. The officials then signaled a goal because the puck went through the back of Niagara's net, and the call on the ice stood following a review to give AIC a 2-1 lead.

The same belief that fueled Niagara all season allowed it to respond.

"We used that throughout the whole year and in playoffs we used that," senior Nick Farmer said of the preseason ranking. "We kept building off that and believing in each other. We got the results and kept believing, kept believing. Each result we got took it to another level and we kept riding that wave."

The Yellow Jackets tied the score, 1-1, at 9:46 into the second period when Janis Jaks' wrist shot went over Wilson's glove for a power-play goal.

Wilson, who entered Saturday with a 2.76 goals-against average and .910 save percentage in 33 games this season, continued his remarkable tournament run. He stopped all 14 shots he faced in the first period and 31 of 33 in the game, making a number of highlight-reel saves.

With Wilson's heroics, Niagara seemed destined to make more history when it broke the scoreless tie at 6:21 into the second period. Justin Kendall, a sophomore winger who had 11 goals among 25 points entering the game, fired a wrist shot from the high slot and the puck snuck under AIC goalie Zackarias Skog's blocker.

Niagara fell short in the end. As AIC celebrated at the other end of the ice, the Purple Eagles' players raised their sticks in the air to salute their fans after a run that could be only the beginning for a program burgeoning with young talent such as Wilson and Stenlund.

"When we were freshmen, there were only whispers about what Niagara hockey was and what it used to be," senior winger Johnny Curran said. "It’s exciting to see we left it with what we heard about and I can’t wait to see what our freshmen can do because they were the life of our team."