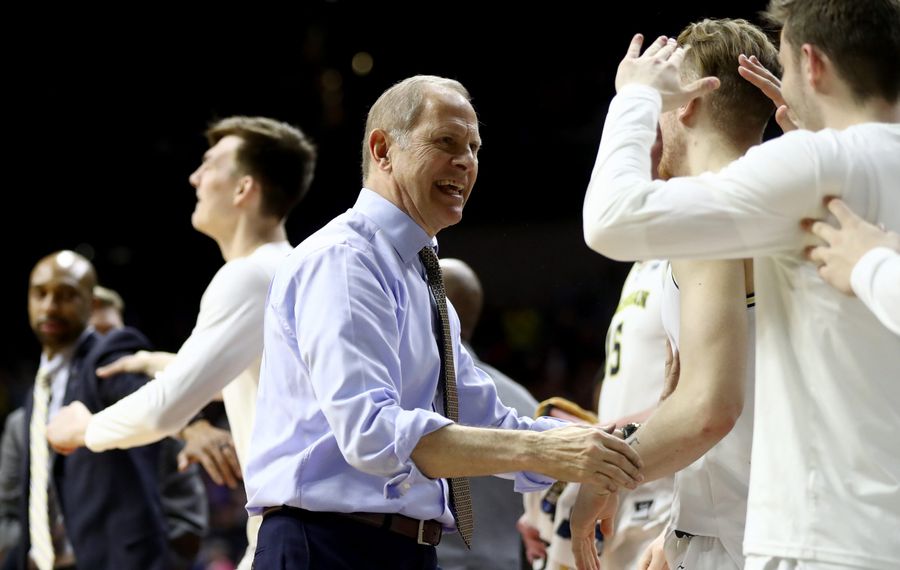 DES MOINES, Iowa — John Beilein came to Michigan in 2007 just hoping to get the school's name called on Selection Sunday.

Nearly 12 years later, he's blitzed by that goal — and just about everything else.

No. 2 Michigan got 19 points from Jordan Poole and clamped down on No. 10 Florida for a 64-49 win Saturday at Wells Fargo Arena in Des Moines to clinch the program's fifth Sweet 16 appearance in the past seven years, including three straight.

The Wolverines now await the winner of Sunday's game between the University at Buffalo and Texas Tech in Tulsa. That matchup would be Thursday in Anaheim, Calif.

A UB win would pit Beilein, the Western New York native, against a team he saw often as coach at Canisius.

Zavier Simpson added nine points, nine assists and nine rebounds, as the Wolverines outscored the Gators, 32-21, in the second half.

Florida shot well above its average in the first half, going 6 of 12 from 3-point range.

The Gators are normally a 33 percent 3-point shooting team, but Michigan had a few defensive lapses that resulted in open looks.

That changed at halftime and Michigan's defense suffocated anything Florida might have had offensively.

Leading scorer KeyVaughn Allen (eight points), who was shadowed most of the game by Charles Matthews, didn't score his first bucket until midway through the second half. The Gators hit two of their first 10 3-point attempts after the break.

As important, everything inside the 3-point arc was contested. Florida wound up shooting 34.5 percent for the game and was held under 50 points.

Michigan's defense has been its calling card all season. It's only natural the Wolverines punched another Sweet 16 ticket by locking everything down.

The way these two teams play, with defense taking center stage, this was bound to be a low-scoring, grinder of a game.

But Michigan had enough offensively, even if it wasn't overly consistent.
Poole, who has struggled with shot selection this season, had a few terrific moments Saturday with better overall decision making at the offensive end. He still forced a few more shots than Beilein might like, but he did take the ball to the rim a bit more and opted to attack Florida's defense rather than settle away from it.

Things don't come easy against teams like Florida, which routinely switched between man-to-man and a 1-3-1 zone. But Michigan made enough plays, especially around the rim.

The Wolverines were active in the paint most of the game, and outscored Florida 34-16 in the paint.

Michigan was the better team from start to finish. Florida kept this game close in the first half thanks to some unusual makes from deep.

But Michigan just had more offense.

Michigan was patient against Florida's zone. Its shot selection was much better than it was earlier in the season against teams that defend this way.

As a result, the Wolverines had were in control most of the night. It felt like only a matter of time before Florida's 3's stopped falling and Michigan pulled away.

Now, the Wolverines are back in the Sweet 16.