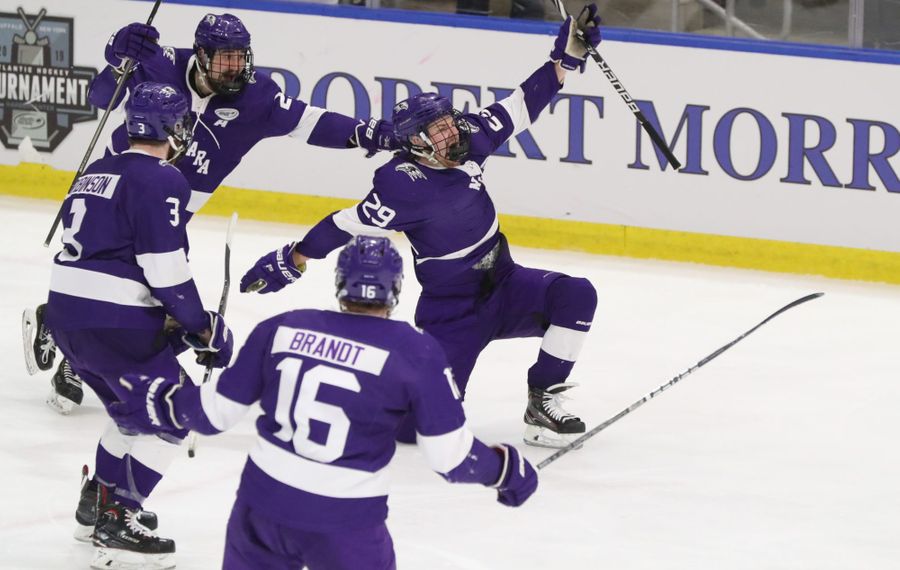 History has been made for the Niagara University men’s hockey team.

The Purple Eagles earned their first-ever spot in the Atlantic Hockey Association championship game Friday night with a thrilling 1-0 overtime win against rival RIT before a packed crowd of 1,800 at Harborcenter.

Freshman phenom Ludwig Stenlund scored with 12:57 to play in the overtime, breaking the tension and continuing his hot play in the postseason.

After establishing possession in the RIT zone, Purple Eagles forward Johnny Curran slid the puck over to Stenlund, who paused for a moment to assess the situation before calmly guiding a backhander through the legs of Tigers goaltender Logan Drackett.

"The goalie was kind of far out so I just tried to make a move and slide it through his five-hole," said Stenlund, a native of Skelleftea, Sweden. "Luckily, it went in. It was probably the best feeling I ever had."

Stenlund, who was named the Atlantic Hockey Rookie of the Year on Thursday, came into the game leading Niagara with 41 points (22 goals, 19 assists) in 39 games. During the regular season, he finished as the nation’s top rookie in goals (19), points (34), power-play goals (9), power-play points (15) and short-handed goals (3).

He’s kept it up in the playoffs, with five points (two goals, three assists) in the Purple Eagles’ quarterfinal sweep of Air Force in a best-of-three series last weekend before Friday’s heroics.

Who else but Ludwig Stenlund.

"He's obviously a new guy. We don’t talk about being a freshman or any of that stuff, but he’s a new guy and he’s pushed us," Niagara coach Jason Lammers said. "He’s pushed guys to play through some things. He’s committed to that. He does great in school for not having English as a first language, and then as a player, you saw his poise tonight.

"A lot of guys would just fire that back into the net. He took a breath and made a play. It’s a credit to him and how he’s trained and how hard he’s worked."

Niagara advances to the final, which will be held at 7:30 p.m. Saturday at Harborcenter. Not bad for a program that was picked to finish last in the AHA preseason poll.

"Tonight, it’s real exciting. I think the exciting part for me is obviously we see the result, but we worked really hard all year to see how we respond,” Lammers said. “I thought the guys really responded at different points throughout the game. They’re confident, they’re committed and it’s just fun to be a part of.”

The Purple Eagles will face No. 1 seed AIC, which is ranked 19th in the USCHO.com Division I poll. The Yellow Jackets were 3-2 winners against No. 8-seed Robert Morris in the first semifinal Friday, with Blake Christensen getting the game-winning goal 1:44 into overtime.

Niagara went 1-3 against AIC in the regular season, but the Purple Eagles are peaking at the right time. They’re now 5-1 in the playoffs and have won six of their last seven games overall.

"They believe in themselves," Lammers said. "They’ve believed in themselves all year. They were handed a mission that they’ve continued to work on. The thing that I love about our group, though, is we’re humble and we’re hungry.”

The Purple Eagles had to do something Friday they’ve gotten accustomed to. Four of Niagara’s six playoff games this postseason have gone past regulation.

"It seems like we’ve been in overtime every game in the playoffs,” Niagara goalie Brian Wilson said. “We’ve done it a ton at this point. It’s not even stressful any more. It’s more fun. At this point, it almost feels like we have an advantage over the other guys because we’ve been through it so much.”

Friday’s extra session was not without some tense moments for the Purple Eagles. The Tigers started overtime with 1:26 remaining on the power play. RIT freshman forward Kobe Walker used a nifty toe drag to break into Niagara territory with less than a minute left in regulation, and was tripped up by Curran for the Purple Eagles’ first penalty of the game. Despite three shots on the power play, the Tigers couldn’t cash in.

That’s because of Wilson. A 6-foot-4, 185-pound sophomore from Pickering, Ont., Wilson entered the game with a 13-13-5 record, 2.86 goals-against average and .908 save percentage. He consistently took good angles in the crease and quickly pounced on any rebounds before the Tigers could get second-chance opportunities, ultimately finishing with 32 saves.

"I think the ‘D’ did a really good job in front of me,” Wilson said. "It’s the forwards too, not just the ‘D.’ I can think of a couple times where maybe a rebound came off, but we were in the perfect spot. We were first to the puck and they didn’t get second opportunities, so that’s huge.”

Drackett was similarly on his game, stopping 26 of 27 shots. A sophomore from Calgary, his best save came with about 16 minutes left. Niagara freshman Reed Robinson – who got the secondary assist on Stenlund’s goal -- got behind the RIT defense for a chance that Drackett took away. The Purple Eagles narrowly missed another chance to go ahead when RIT defenseman Dan Willett swept the puck away from Curran on the doorstep of an empty net with less than 6 minutes to play.

A tight game was to be expected since Niagara and RIT are familiar with one another. They met Friday for the fifth time this season. RIT went 2-1-1 in the regular season, but Niagara won the last of those meetings, 4-2, on Feb. 27, starting their current hot streak.

Niagara, the sixth seed in the conference tournament, improved to 17-18-5. RIT, the fifth seed, finishes the year 17-17-4 overall. Niagara and RIT had met in the postseason three previous times, with the Purple Eagles winning a pair of quarterfinal series in 2017 and 2014 and RIT winning a semifinal matchup in 2012.