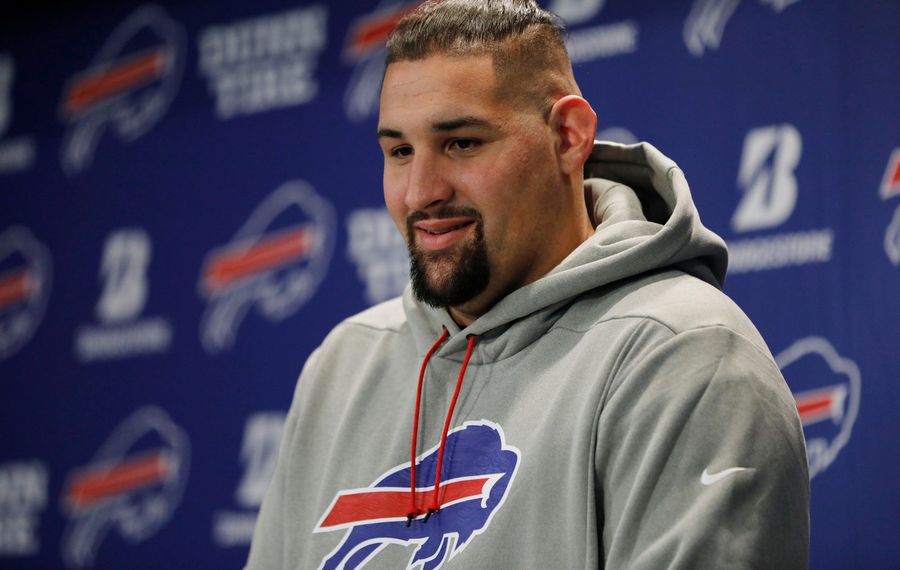 “Super, super tough,” is how General Manager Brandon Beane described Feliciano last week. “Very nasty. When he gets his hands on you, school’s out.”

Feliciano, 27, signed a two-year contract shortly after the start of free agency. Other players with far more starting experience didn’t have a new deal at that point — a good indication of how the Bills valued Feliciano.

The money in his deal — potentially $7.25 million over two years with $3.9 million guaranteed — indicates the team believes he has a chance to win one of the two starting guard jobs. He'll be in competition primarily with Spencer Long and Wyatt Teller.

“Just competing. That’s the main word we kept talking about,” Feliciano said. “I can play all three interior positions, so wherever they need me. … I kept telling the coaches how grateful I am, just to be able to have a chance to start. … Honestly, that’s the only thing you can ask for.”

Feliciano spent the first four years of his professional career with the Oakland Raiders, who selected him with a fourth-round draft pick in 2015. He played in every game in those four years, but started just eight times. Feliciano was stuck behind center Rodney Hudson and guards Kelechi Osemele and Gabe Jackson in Oakland. Hudson and Osemele have made multiple Pro Bowls, while Jackson has started 72 of 73 career games.

“Unfortunately, or fortunately, I was behind Pro Bowlers with the Raiders,” he said. “One of the good things of being in that situation, I got to learn a lot from them. Rodney Hudson helped me tremendously learning the game of football and just how to be a pro.”

Feliciano, 6-foot-4 and 325 pounds, made a positive impression when he got extended playing time. When the Raiders traded Osemele to the Jets earlier this month, several fans and media members in Oakland thought Feliciano would get a chance to take over.

Instead, the Bills moved quickly to give him that chance here.

“I just try to go out there and give it my all,” Feliciano said. “Just try to go out there and maul people, be physical, try to be the best teammate I can be. I like run blocking, man. I like getting after people. Not to say I mind a pass play now and then, but just being able to run my feet and drive a guy down to the ground is kind of my thing.”

Beane said that stood out on film.

“He likes to get guys and just dump them,” the GM said. “Sometimes he’ll … try too hard to dump them and his strength is probably his weakness, too. But I’ll take those misses on a guy that’s being overly aggressive.”

The Bills had a good idea what kind of player and person they were getting in Feliciano. Offensive line coach Bobby Johnson spent three seasons in Oakland as tight ends coach, from 2015-17.

“I know he helped me, and I really want to come here and help as much as I can,” Feliciano said. “Bobby's going to be a big part of that. Drawing back to being in Oakland with him, he was in the run-game meetings with us all the time. He helped me before he was an O-line coach, being a tight end coach. I think he'll be able to help us see the game in a different light. I have full confidence in Bobby. … I can't stress enough how excited I am to be here. I think it's going to be a great fit.”

“I think he fits what we are trying to do with this O-line and you’ll definitely see a guy playing with an edge,” Beane said.