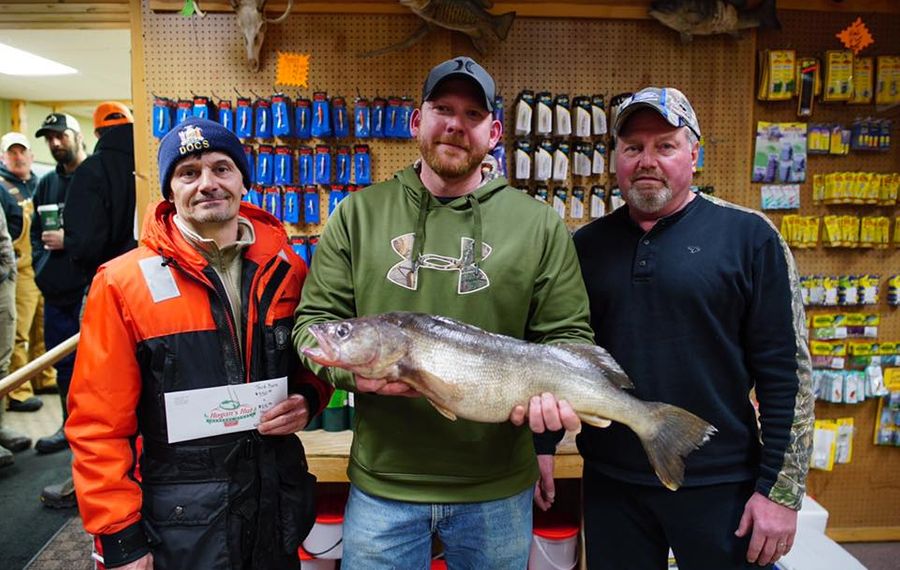 The early stocking announcements from DEC are out as we prepare for the April 1 inland trout and salmon season. Take a drive Saturday if you want to find “fish on the move” at the Lake Ontario Fisheries Symposium at the Fingerlakes Mall in Auburn from 10 a.m. to 4 p.m. Register at www.ilovenyfishing.com.

Danny Colville at Colville Outfitters in Hamburg sends word that trout are all over in the tributaries. A good push of fresh trout is chasing emeralds and the best baits have been soft beads, eggs, jigs and rubber micro trout worms in white, bubble gum and pink. Danny Jankowiak of Buffalo reiterated the good fishing with drop backs and a mix of fresh ones, especially in the Southern Tier streams off the lake. Some streams are sporting a nice green hue; others have more stained conditions. Cattaraugus Creek was in poor shape. Best baits were black and white jigs, as well as white zonkers on the swing.

Action in the lower Niagara continues to be very good for a mix of trout. According to Lisa Drabczyk of Creek Road Bait and Tackle in Lewiston, pink sacs were working along Artpark from boat and shore. Shore casters also are using spinners. Further down the river toward the Niagara Bar, brown trout and lake trout have been cooperating for boaters using shiners. The Devil’s Hole area was fishing well, but the water turned clear and made things more difficult. Look for some rain and snow melt to add a bit of stain heading into the weekend.

Ray Mahtook of Youngstown reports that brown trout action is starting to pick up near the mouth of the river and to the east in 6-8 feet of water. Try trolling small stickbaits. The tributaries are starting to improve along the lake. Ron Bierstine at Oak Orchard Tackle and Lodge reports there have been some hook-ups at the Waterport Dam. Flows are a bit high with a foot or two of visibility. Look for some fresh fish to be moving in across the lake shore.

The ice is deteriorating rapidly, and the creek mouths are open, according to Mike Sperry of Chautauqua Reel Outdoors. It won’t be long before the crappies start running. In the Hogan’s Hut walleye contest March 9, Nate Wurst took top honors with a 26.5-inch fish, followed by Kevin Fyock with a 26-inch ‘eye and Tom Sacilowski with a 25.25-inch walleye.

Jan. 23 – Erie County Federation of Sportsmen’s Clubs monthly meeting at the Elma Conservation Club, 600 Creek Road, Elma, with the general meeting beginning at 7 p.m. Guest speaker will be Jason Engle from Springville Field and Stream, who will talk…

Best hard water action coming through is from Oneida Lake and Chaumont Bay, according to Ron Bellamy with Ice Fishing Fanatics. A few are venturing out on some other inland bodies of water, but caution is advised. Be sure to spud your way out … and spud your way in.

All permanent huts are off Lake Simcoe to coincide with the closing of lake trout, whitefish, cisco and walleye seasons, according to local expert Wil Wegman. Pike is open until the end of March, but yellow perch remain open year-round. Most places still have 2 feet or more of ice, but some south facing shorelines are beginning to deteriorate. Perch fishing has been hit and miss and no real depth pattern has been established yet. Last weekend, Wegman was catching jumbos at 18-, 28-, 35- and 45-foot depths. Still lots of reports of small fish overall, but someone always seems to find the lake’s legendary jumbos.

After two and a half months, Capt. Bob’s Outdoors Fishing Contest wrapped things up last Friday. According to organizer Steve Hawkins, the winners of the 8 Divisions are as follows:

In the Walleye Division, Bob Frost of Alden set the pace with a 29-inch, 9.69 pound fish he caught from Chaumont Bay in eastern Lake Ontario. Brad Thiele of Youngstown won the Northern Pike category with a 39-1/8-inch fish he caught from Wilson Harbor through the ice and released it after a quick measurement. Perch Division winner was Jack Mings of Amherst with a 14-1/8-inch fish that weighed 1.49 pounds. It was caught in a pond.

Biggest steelhead was a 33-inch fish caught in the lower Niagara River by Joel Meister of Akron. The fish was released to fight another day. Top Lake Trout was a 32-inch fish caught by Steve Ball of Alden from Lake Ontario. The fish was also released. First-place Crappie was a 16-inch fish that tipped the scales at 1.78 pounds by Greg White of Lancaster. Mike Rinallo of Amherst earned the top spot for Sunfish/Bluegill with a 10 1/2 inch fish that weighed .87 pounds. Rudd Division winner was California Joe Pavalonis of Buffalo with a huge 18-inch fish that weighed 3.42 pounds. He caught it in the upper Niagara River. All first- and second-place winners with their corresponding prizes will be handed out at the shop in Clarence on March 25.

Trout stocking is underway in the inland waters of Western New York in preparation for the April 1 opener. Weekly updates can be found on the Randolph Hatchery Stocking Hotline at 358-2050 or on the DEC website at www.dec.ny.gov.