Once Bob Lanier and his wounded knee missed St. Bonaventure's run to the Final Four in 1970, it took a long time for college hoops to become relevant around here again. But we're finally there.

Now, there were some memorable years at Canisius in the 1980s and 1990s. And we enjoyed the amazing double-overtime NCAA loss by St. Bonaventure to Kentucky in 2000 and two NCAA trips by Niagara in the 2000s. But those were pockets of prosperity sandwiched between lots of hard times.

As March Madness became part of the national sporting scene, we were largely left out of the party. From 1978-1999, in fact, the only NCAA Tournament game any of our teams played in was Canisius' 29-point loss to Utah in 1996.

And from 1970 until last year, the only NCAA Tournament win any local men's team got was Niagara's play-in game victory over Florida A&M in 2007. From the time the Little 3 women moved to Division I in 1986, no one made the NCAA Tournament until Canisius got there in 2005 and nobody won a game until St. Bonaventure's Sweet 16 run in 2012.

Things feel so much different now. Welcome to the Golden Era of Big 4 basketball. 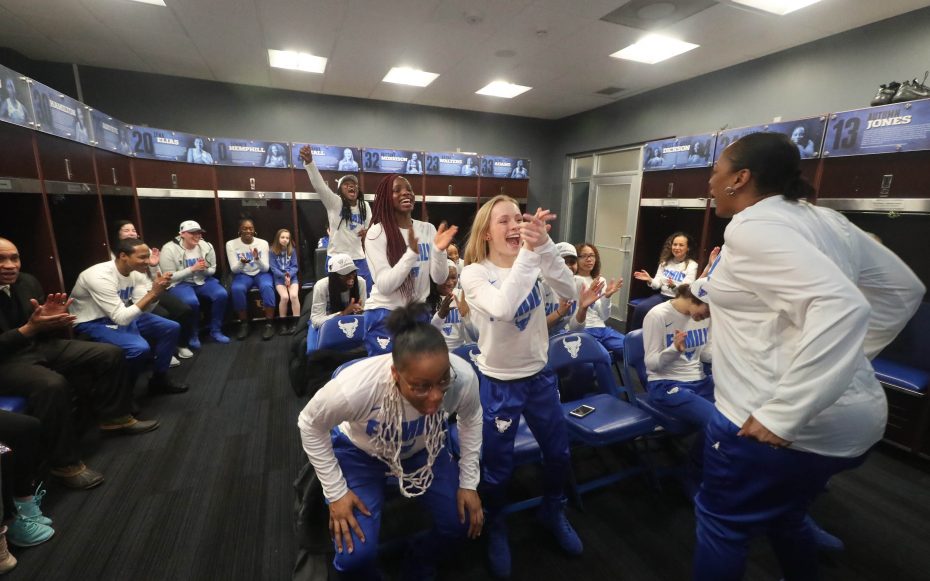 UB's women's basketball team hopes to do some celebrating after the first two rounds of the NCAA Tournament. (John Hickey/Buffalo News)

The 2012 Bona women won 31 games and returned to the tourney to beat Oklahoma State in 2016, while the Bona men beat UCLA in the First Four last year. The UB men broke through to upset Arizona last year and the women got to the Sweet 16.

UB basketball is now mainstream on the Buffalo sports scene. The men get sellout crowds to Alumni Arena, with tickets even listed on StubHub, and have gone to the NCAA Tournament four times in five years. You can actually talk Sweet 16, Elite Eight or Final Four and not be considered a hopeless shill.

The women are going for the third time in four years, with coach Felisha Legette-Jack resurrecting her career and providing women's sports with a leader and advocate like this area has not seen since the days of Sister Maria Pares at Canisius and Sacred Heart Academy.

Both UB teams have big dreams for the next couple of weeks. But it's impossible not to think about where the programs came from to get to this point.

Coach Nate Oats' club is tied with Houston for the best record in the nation at 31-3. It's incredible to think they have 31 wins. What was UB's record from 1998-2003 in its first five years in the Mid-American Conference?

Yep, this year's Bulls have five years worth of victories from the school's early days in the MAC.

Things were a little better in the early years of Division I for the UB women's team. They had five 20-win seasons under Sal Buscaglia but never could crack the postseason in the East Coast or Mid-Continent conferences. They won 18 or 19 games three times under Cheryl Dozier from 1998-2005 and won 10 MAC games in 2001, a season that started with a home triumph over North Carolina, resulting in a court-storming in Alumni Arena. 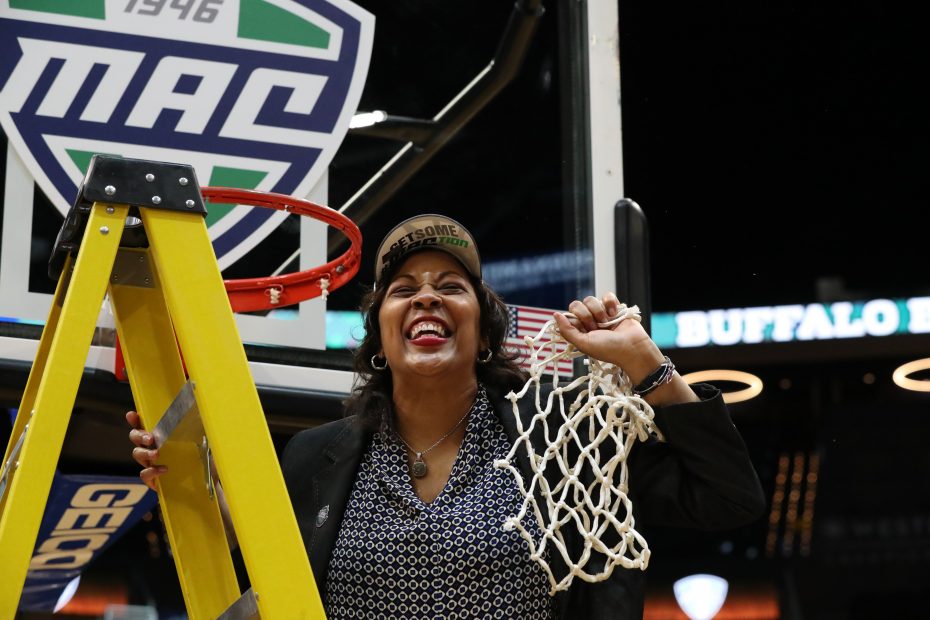 But then things fell apart. From 2003-2013, the UB women didn't have a winning record and were 20-game losers six times. Their 2004-05 opener was a 107-40 Globetrotters-Generals affair against UConn in Gampel Pavilion. If it can get to a second-round matchup against the Huskies this weekend, suffice to say, this UB team will be a tad more competitive.

In the last four years under Legette-Jack, the UB women are 94-39. In their final four years under predecessor Linda Hill-MacDonald from 2008-2012, they were 40-85. Talk about a turnaround.

The UB men had an arduous climb to respectability. There was a big win the Division II-bound Bulls had in Memorial Auditorium over LeMoyne and a young coach named John Beilein in 1986. But when it was time to go to Division I, UB wasn't ready.

The Bulls went 2-26 in their 1991-92 inaugural season and opened the next year with a 106-36 loss at Iowa State. Then-AD Nelson Townsend fretted the next week that he wouldn't have expected to lose to an NBA team by 70 points. 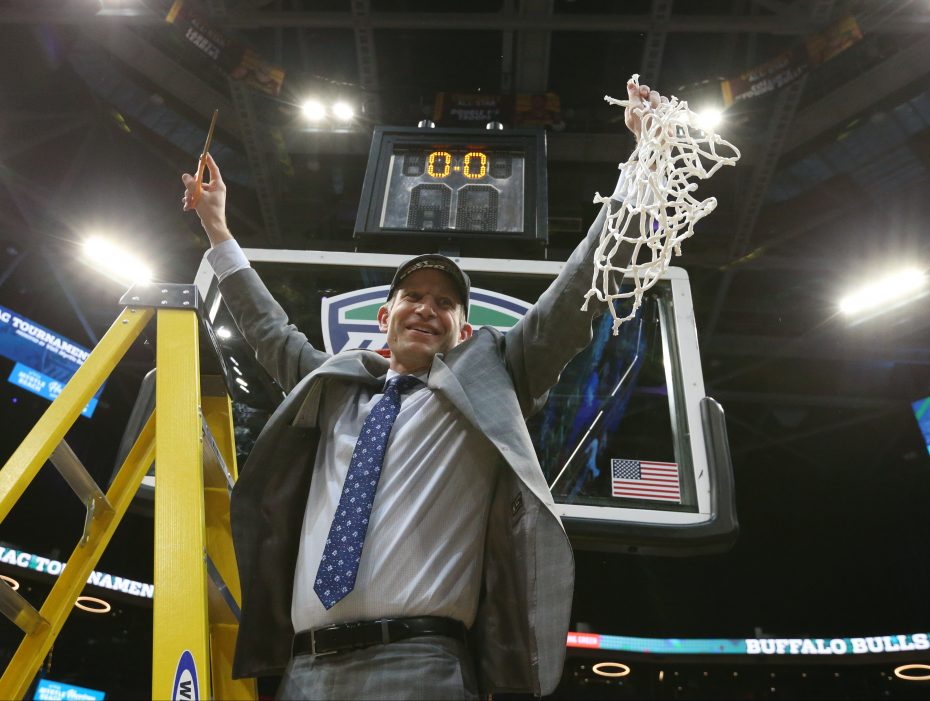 UB coach Nate Oats celebrated the MAC Tournament title, but how many times will he celebrate in the NCAA Tournament? (James P. McCoy/Buffalo News)

Things only got mildly better as time went on. UB couldn't beat Valparaiso in the Mid-Con. There were bad losses to Missouri-Kansas City and Western Illinois. The fans stormed the court in Alumni in 2004 when the Bulls beat Northern Illinois in a pre-quarterfinal of the MAC Tournament – getting the Bulls to Cleveland for the first time in their six years in the league.

The school struggled at times to put together a Division I program off the court, too.

Eccentric former coach Tim Cohane once banned his starters from talking to reporters after a 34-point loss to Syracuse in Marine Midland Arena in 1996. That infuriated one local media member – slowly raising hand here – to rail at a school official that the Bulls should "go back and play Philadelphia Textile" if that's how they were going to act.

Philly Tex was a former Division II foe. That was a low moment when you consider that the previous two weeks, UB had helped open the arena with a buzzer-beating overtime win over Niagara and another one over St. Bonaventure on a 35-footer by Rasaun Young, who had his jersey retired at this year's finale.

UB never really figured things out under Cohane before he was run out early in the 1999-2000 season. They had four 20-win seasons under Reggie Witherspoon but couldn't reach the NCAA Tournament under him either.

The 2005 MAC title game still resonates as one of the greatest heartbreakers in UB history as a senior-laden team blew a 19-point lead in the second half of the championship game against Ohio and lost by one point on a put-back in the final second. 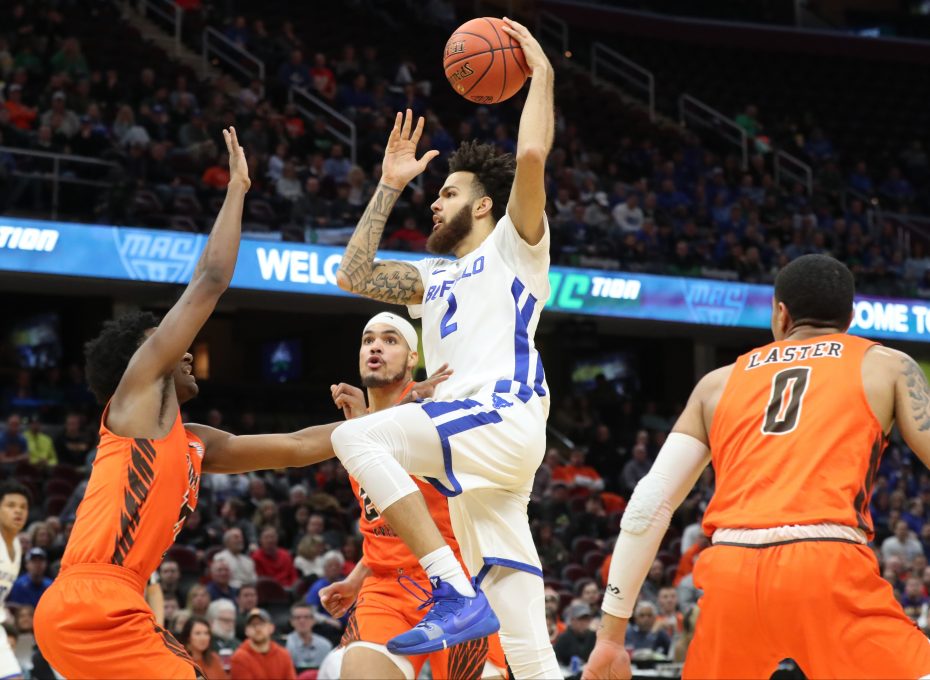 From that near-miss, it took the Bulls 10 years to finally make the tournament under Bobby Hurley. Then came Oats.

Now we're talking big dreams. As in the first single-digit seed for a Big 4 men's team in the tourney's seeding era. A No. 6 can often go places in the tournament. It wouldn't be much of a Cinderella if the word "Buffalo" wasn't across the front of the jersey.

The other No. 6 seeds this year are Villanova, Iowa State and Maryland. It's not crazy to think one of them could be in Minneapolis for the Final Four, so why not the Bulls? And don't forget Kansas won the title as a No. 6 seed in 1988.

Some games can make your program and turn it around for a long time. UB's win over Arizona seems to be one like that. Some can send your program in a direction it doesn't want to go. Canisius' 1997 MAAC Tournament championship-game loss to Fairfield in Marine Midland Arena feels like such a game, too.

The Griffs would have gone to the tournament two years in a row, but were instead upset by a No. 8 seed that nearly knocked off North Carolina the next week as a No. 16 NCAA seed. It turned out to be Beilein's final game before leaving for Richmond and Canisius has played in only one MAAC final since, losing to Iona in 2001. Since its run of three straight trips ended in 1957, that lone blowout in '96 is the only NCAA game Canisius has played.

Niagara hasn't been the same since Joe Mihalich left for Hofstra in 2013, and fired coach Chris Casey last week after the MAAC Tournament. The Niagara and Canisius women are hopeful of progress, but the MAAC has been dominated for a decade by first Marist and now Quinnipiac. The Bona women have fallen back as well after coach Jim Crowley left for Providence.

It leaves UB to lead the local hoop landscape for both men and women. The Bona men are also doing their part, going to the NCAA Tournament in 2012 and 2018 and narrowly missing this year with a team that started three freshmen in another remarkable coaching job by Mark Schmidt.

It shows how much coaching matters. UB is trying to do all it can to keep Oats and needs to do likewise with Legette-Jack. Lessons at other Big 4 schools show the departure of coaches is when the programs often fall.

Big 4 basketball has never been as hot as it is right now for UB. The Bulls have to strike again this weekend.

March Madness history for the Big 4