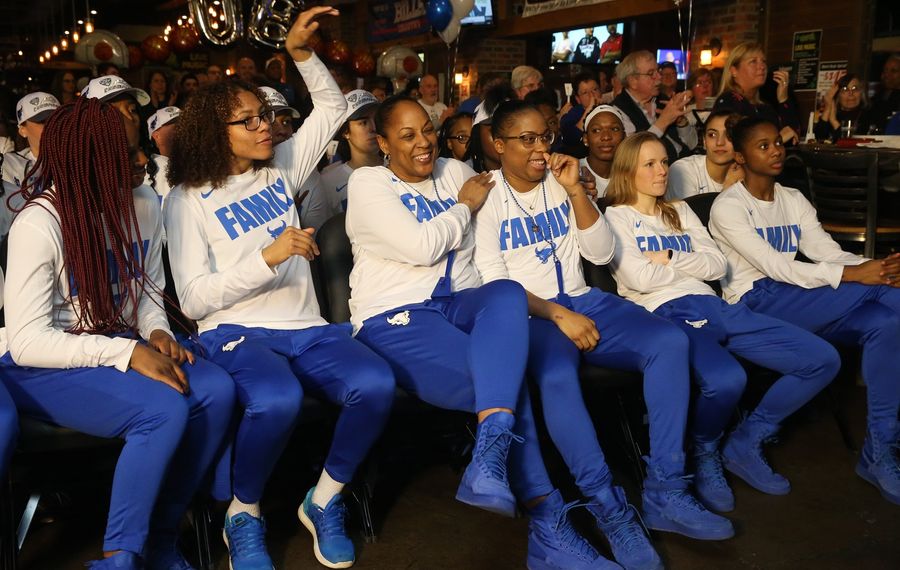 Talk about spoiling some basketball parties with unforced turnovers.

On Monday, the excitement surrounding the University at Buffalo women’s basketball team making it into the NCAA tournament was diminished by an unimaginable leak, an unfortunate tweet and an unfair game time.

The disruptive "Big Dance" leak Monday came courtesy of ESPN, which accidentally revealed the women’s tournament brackets on ESPNU several hours before a selection show announcing the seeds and pairings was scheduled to air in a two-hour special at 7 p.m.

That led scheduled watch parties at 7 p.m. in Western New York and across the nation to lose one key element – suspense.

ESPN then made the questionable decision to air a hastily arranged 30-minute special at 5 p.m. on ESPN2. Before the start of the program, ESPN apologized for the leak.

“In the midst of our preparation, the bracket was mistakenly posted on ESPNU,” the network said in a statement. “We deeply regret the error and extend our apology to the N.C.A.A. and the women’s basketball community.”

ESPN could have and should have waited until 7 p.m. to confirm the leaked brackets. Sure, it was leaked. But viewers at work might have been unaware of it and there still might have been suspense over whether the real tournament schedule was the one actually leaked.

Heck, ABC’s popular reality show “The Bachelor” doesn’t run the episode in which the winning woman is chosen early just because the choice is leaked on websites weeks earlier.

The leaked schedule led to some scrambling at UB. Coach Felisha Legette-Jack sent out a tweet about the 5 p.m. show and added: “Our team will watch in our locker room. All are welcome. Sorry for the inconvenience. Go Bulls!”

Channel 4's cameras were there at 5 p.m. Sports reporter-anchor Jenna Harner, who has been impressive since arriving here almost a year ago, sent out a tweet with video of the UB women celebrating that was misleading, even if that wasn’t her intention.

Harner tweeted: “Here's an exclusive look at the moment @UBwomenshoops found out they were headed to Storrs as a 10 seed in the #NCAATournament! @news4buffalo was in the locker room the moment @espn released the bracket, two hours ahead of schedule due to a leak earlier in the day.”

Here's an exclusive look at the moment @UBwomenshoops found out they were headed to Storrs as a 10 seed in the #NCAATournament ! @news4buffalo was in the locker room the moment @espn released the bracket, two hours ahead of schedule due to a leak earlier in the day. pic.twitter.com/AJ2dMmUYZb

That sure made it sound like the UB women were just hearing about where they were going and who they were playing, even though they received a group text message hours earlier telling them the details.

In an exchange of tweets, Harner explained the tweet “was from the moment they officially heard their name called on the ESPN 2 5pm Selection Show.”

Harner said the reaction of Legette-Jack and six players was not staged.

“They moved the team watching the selection show to their locker room, per Coach Jack's tweet,” wrote Harner. “This was their genuine reaction to hearing ESPN 2 officially reveal Buffalo as the 10 seed (even though yes, they did know prior to the official announcement.)”

Harner acknowledged it would have been a good idea to use the word "officially" in her initial tweet as she did in the tweet to this reporter.

The women’s committee could have used a little foresight in the reaction to UB’s game time. It decided that the UB women would play Rutgers starting at 4:30 p.m. Friday. That is 30 minutes after the UB men’s first-round game with either Arizona State or St. John’s is scheduled to start.

However, the start of the men’s game is dependent on when the first game in Tulsa ends between Northern Kentucky and Texas Tech after a 1:30 p.m. start. The 4 p.m. start time assumes the first game will end within two hours, giving UB and its opponent 30 minutes to warm up. If the first game goes long – and the final two minutes of a close game can take 20 minutes if the team behind plays the foul game – the UB men’s game could start at the same time as the women’s game.

UB Athletic Director Mark Alnutt conceded that you’d like to have the games played on alternating days but still tried to put a positive spin on the games being played simultaneously.

“We’ll be able to have alternating TVs and just make it a big UB basketball watch party,” said Alnutt. “Not just men and women specific.”

“It’s a great opportunity for us to be in the spotlight and for our brand to continue to grow,” he added. “And the national exposure that this university and Western New York get, it’s a good thing.”

Sorry, having the men and women play at the same time is unfair to the women, who deserve all the attention they can get.

Interest in the women’s team has grown substantially here. But judging by television ratings, media attention and attendance, there is far more interest in the men’s game.

Unfortunately, the much higher interest in the men’s team is bound to hurt the size of the TV audience for the women’s game.