Darren Brown-Hall has built a career in education. In Buffalo, he grew up deeply influenced by a schoolteacher mother, Linda Brown, and his own youthful passion for math and physics eventually led him to the classroom.

He is now an administrator, the chief of staff for the Buffalo Public Schools. As a parent and an educator, Brown-Hall, 45, tries to see opportunities for both learning and teaching in the unpredictable and sometimes harsh push-and-shove that goes with everyday life.

The past few weeks were as painful a challenge to that philosophy as he ever faced, after his own son was the target of blatant racist taunts, clearly recorded on video (Warning: explicit language), during a youth hockey game.

The incident exploded last week into a national story, when shock waves from the video led officials to cancel the league playoffs. The footage depicts action toward the end of a Jan. 20 game at the Northtown Center in Amherst for the Multiple Organization House League, which is part of the Western New York Amateur Hockey League.

In a video captured by another parent, players from the Cheektowaga Warriors 18-and-under team can be heard making loud ape noises and shouting “(expletive) monkey” toward Roshaun Brown-Hall, 17, who plays on an Amherst Youth Hockey Association team.

Darren Brown-Hall was at a birthday party that day for his mother. His husband, Chris Brown-Hall, was at the rink to watch their son, but he did not hear the taunting because he was seated too far away from the ice.

Roshaun, after the game, told Chris the name-calling had gotten out of control. Still, the couple did not realize the magnitude of what happened until Amherst’s upset coach sent them an email that week, indicating he was officially alerting the league. 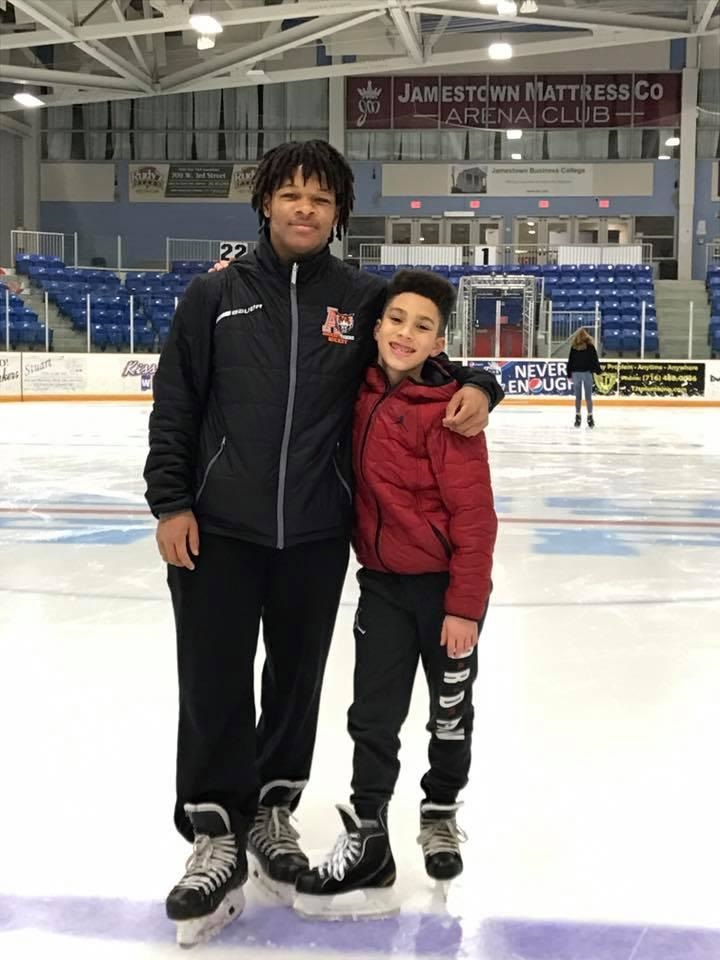 At that point, Roshaun's parents again reassured their son, and began expecting some definitive public response. It did not happen until a few days ago, almost two months after the incident, when  two players and the coach were suspended from the Cheektowaga team.

Brown-Hall and his husband were left to wonder why it took so long, and if there will be any additional steps to try and identify how something so ugly could happen in the first place.

Sunday, the couple received an email from David M. Braunstein, longtime regional president of the New York State Amateur Hockey Association. He told them he was resigning, more than a month after he sent Roshaun's parents an email, promising the association would investigate the matter.

"It was a very thoughtful, apologetic email, apologizing for the way it was handled, and we do appreciate it," Brown-Hall said.

He said that he and Braunstein had a followup telephone conversation on Monday, involving the same tone. It left Brown-Hall looking ahead to what he sees as the obvious response.

As a father, he said he is most concerned about how the association – in the form of every administrator and coach involved in its operation – will take steps to help its players become stronger, more insightful human beings, which Brown-Hall sees as the entire point of youth sports.

“If we ignore this, if we don’t address it, we’ll never get real change,” he said.

While he is frustrated that an adult bureaucracy seemed to hedge or move slowly to respond, he remains hopeful that the teens involved might come to reflect at a young age on their own cruelty and misconceptions, to realize "there's no place anywhere for anything like that."

Brown-Hall described his entire life as a series of lessons in aspiration and the need for tolerance. His grandfather, George Brown, was part of the “great migration” of African-Americans who left behind the suffocating Jim Crow laws of legal segregation in the South to seek better opportunities in the North.

Raised in St. Louis, Brown moved to Buffalo in his 20s and found a job at the General Motors plant. He had a pivotal impact on his grandson, who listened as Brown recalled the world of his youth, a place where blacks could not swim on a hot day in white-only public pools, or shop casually in stores open to whites, or work in most skilled, good-paying professions.

“He was a huge father figure,” Brown-Hall said of his grandfather. As a child, Brown-Hall was repeatedly told by his parents, grandparents and others in his family that education was the great equalizer, the true engine of change. After college, Brown-Hall taught for a while, then briefly took his affinity for math into business.

Once there, he missed the classroom. He knew it was his real calling. Brown-Hall returned to education, earning his doctorate and serving as a building principal and finally as a district administrator. At every step, he said, he tried to teach children that differences are strengths, “that you can't fully appreciate someone as a person until you appreciate what makes them distinct.”

He described his own trajectory as an ongoing statement of that belief. Darren and Chris Brown-Hall have been in a relationship for 19 years, marrying in 2014, after New York state made same-sex marriage legal. They adopted Roshaun from foster care when he was 5, and later adopted another son, Connor.

In a world where not everyone accepts their marriage, the core notions of love and tolerance, Chris said, have been central to their household since the day their sons came home. 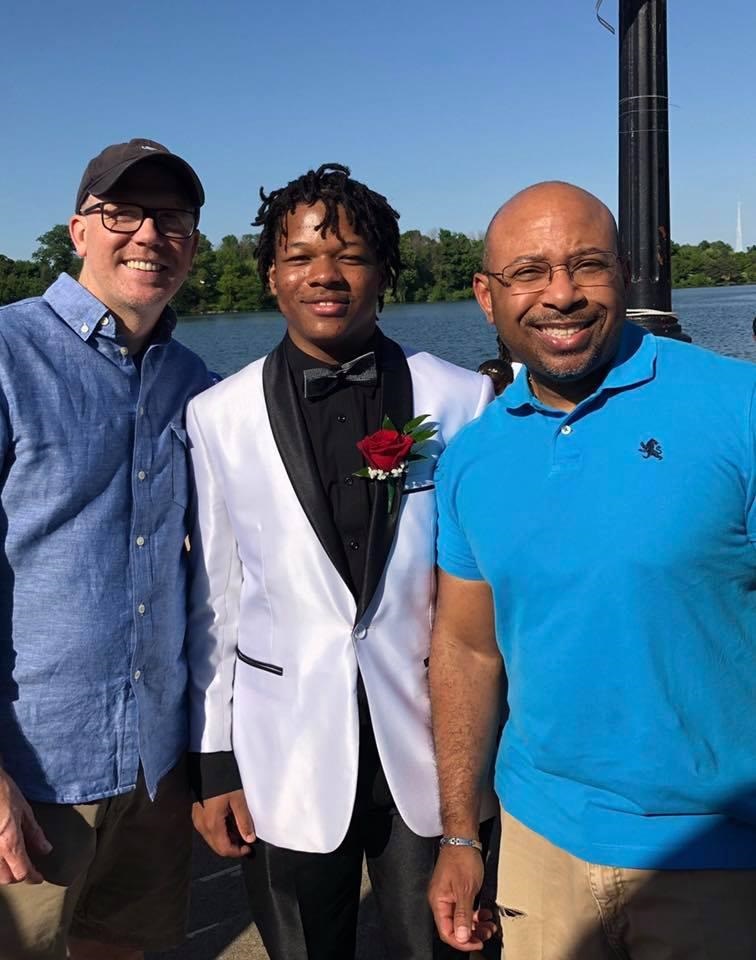 Chris had grown up playing hockey, and he soon brought Roshaun to a rink, where the child showed a deep and lasting love for the sport.

“Hockey,” Chris said, “is the thing he’s most passionate about.”

His parents say Roshaun is a good student, and he intends to study business – probably at SUNY Brockport – once he graduates from high school in Amherst this spring.

To Chris and Darren Brown-Hall, all of it makes the idea that other kids would taunt their son with monkey noises, with racist insults about his appearance or intelligence, almost unimaginable.

It is the antithesis of what they try to live out in their own home. Roshaun and his younger brother grew up in a household with parents who have dedicated their adult lives to quietly making a point about compassion and achievement.

“All of this makes us strong,” said Chris, who runs a private home health care agency.

The couple said Roshaun did not really talk in detail about what happened until they heard from the coach. Roshaun is a teenager, and they know teenagers – especially within a  fiercely competitive sport – worry about looking to adults to solve their problems.

Brown-Hall said the couple explained to their son that they could not afford to skip past the incident. Looking away from acts of anger and ugliness, they told him, is often the one sure way to guarantee that they continue.

Instead, they said that by openly addressing it – by speaking of their lives, of who they are – that maybe, just maybe, anyone who writes off other teenagers in such a way will step beyond that fear and cruelty to see full human beings.

That is both their message and their hope, in a family whose existence is built upon the notion of acceptance. Darren and Chris Brown-Hall said that quiet talk was enough. There was no particularly dramatic moment after the game when they felt they had to sit down with their children to speak to them about the world, about the larger reality of intolerance.

“We’ve been having that conversation," Brown-Hall said, "for their whole lives.”