The last thing you want to do in filling out your NCAA Tournament bracket is go chalk across the board.

Don’t be a Dick Vitale, who routinely picks four No. 1 seeds to make the Final Four and four No. 2s in the Elite Eight.

You want to be able to say: I called that upset. But you also don’t want your bracket blown up after the first weekend. So the key is picking your spots on upsets.

You want to play the odds? Pick two No. 1s. You want to gamble? Pick just one.

I usually go the latter route, and this year is no different. I love two No. 1s, Gonzaga and North Carolina, but I’m only going with the Zags to get to Minneapolis.

I still don’t look upon Gonzaga, the monster mid-major, as part of the “establishment,” even though the Zags have made 20 consecutive NCAA tournaments. They’ve made only one Final Four. The Zags lead the nation in points in the paint. They have an NBA draft pick in 6-8 forward Rui Hachimura and a dominator inside in 6-8 Brandon Clarke, who makes 71 percent of his two-point shots. The Zags are the weakest of the No. 1 seeds, but they have the easiest path to the Final Four among the No. 1s.

We love teams that share the basketball. Play that game the way it’s supposed to be played. Five teams in the field rank in the top 10 in the nation in assist rate, meaning most of their baskets come off assists. They are: Michigan State (1), Utah State (5), Belmont (7), Tennessee (8) and North Carolina (9). Michigan State assists on 68 percent of its buckets. Beautiful.

We’re going with all those teams. Except I have No. 3 seed Houston knocking off North Carolina. Houston, tied with the University at Buffalo with a Division I-best 31 wins, is No. 2 in the nation in defending the 3 and shoots the 3 pretty well, too. That’s a great combination.

Now for the two No. 1s I don’t like: Duke and Virginia. Duke is led by three freshmen who will be NBA lottery picks (Zion Williamson, R.J. Barrett and Cam Reddish), plus a fourth freshman who could be a No. 1 pick (Tyus Jones). Rooting for Duke is like rooting for Microsoft, Amazon and Google to make more money this year, but bias isn’t my only reason for picking against the Blue Devils. They rank 338th in 3-point shooting. At some point, that weakness and their inexperience will catch up to them.

Virginia, you’ll recall, was upset as a No. 1 seed last year by Maryland Baltimore County. Virginia is ripe for an upset again. Why? The Cavaliers play the slowest tempo in the nation (No. 353). Virginia has zero chance – zero! – of getting past Tennessee in the Elite Eight. 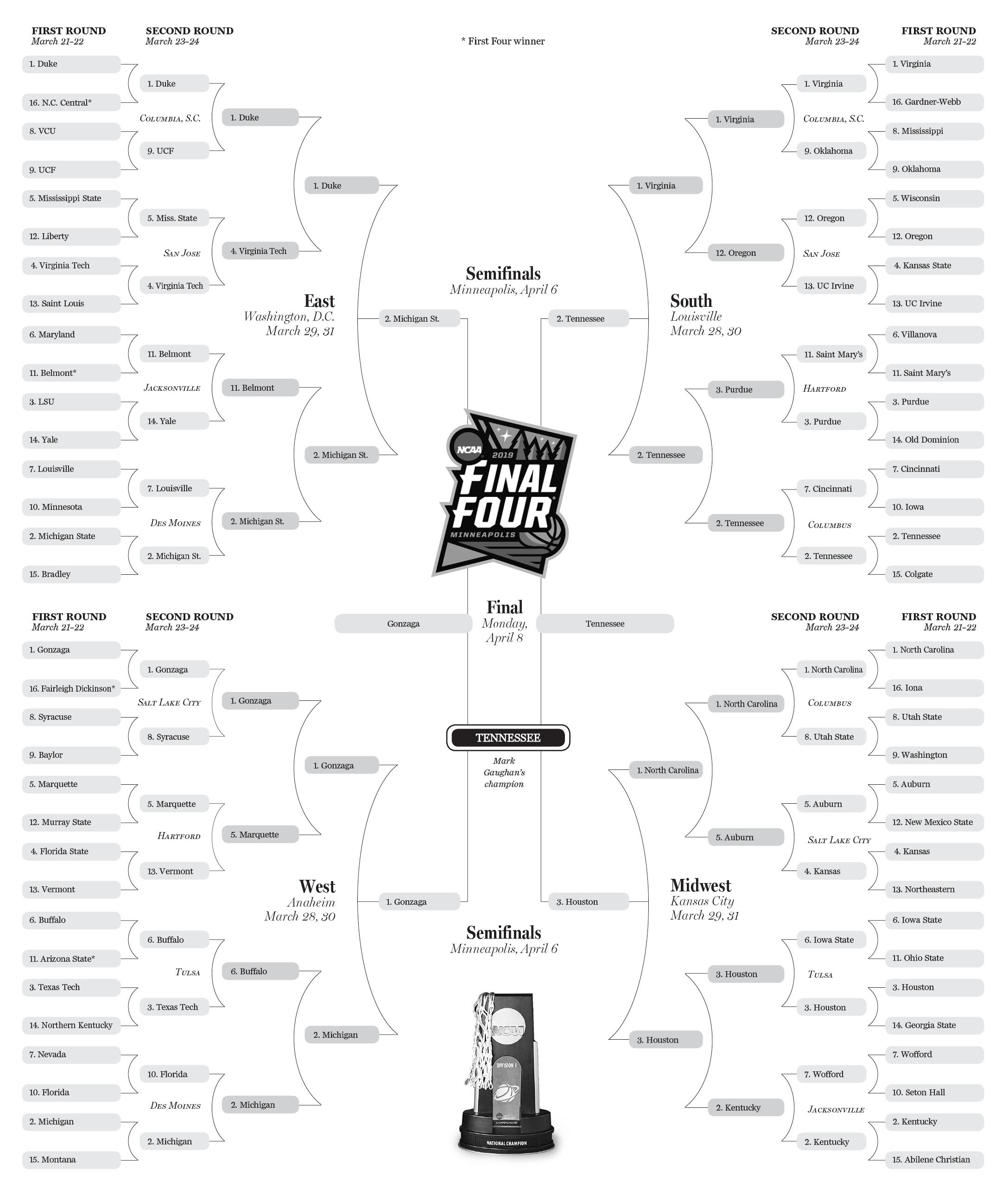 We’re going with two 11 seeds (Belmont and St. Mary’s), one 12 (Oregon) and two 13s (UC-Irvine and Vermont). Tall St. Mary’s is a bad matchup for Villanova, which lives by the 3 and is vulnerable inside. Irvine gets an injury break, because Kansas State star Dean Wade is hurt. Vermont is a great free-throw shooting team and faces a Florida State team that fouls. We’d like to take No. 12 New Mexico State, but it plays the same 3-ball style as No. 5 Auburn, only not as good. We’d like to take No. 12 Murray State, which has the potential No. 2 overall draft pick in point guard Ja Morant. But Murray State gets a tough matchup against Marquette, which also has a first-round guard in Markus Howard, the guy who went super nova on UB in December.

The key to UB making a run is its offensive balance, because the Bulls will keep themselves close with their aggressive defense. UB is No. 2 in the nation in preventing assists (opponents get assists on only 40 percent of field goals). Amazing. That shows how tough UB is on the perimeter. You just can’t get into the lane to dish for easy buckets. The Bulls get the No. 2 defensive team in the nation in Texas Tech in the second round Sunday, presuming each team wins Friday. We think the Bulls’ complementary weapons (Jayvon Graves, Dontay Caruthers and Montell McRae) will play well enough to get UB to the Sweet 16.

Tennessee has been our favorite team all season. The Vols are kind of like UB, only bigger, faster and better. Like UB, the Vols are experienced and play great, up-tempo offense. They’re fun to watch. Plus, they have two Buffalo assistant coaches in Rob Lanier (the Mount St. Joe’s and Bona great) and Desmond Oliver (from Lockport DeSales).

Go Vols. We have them winning it all.