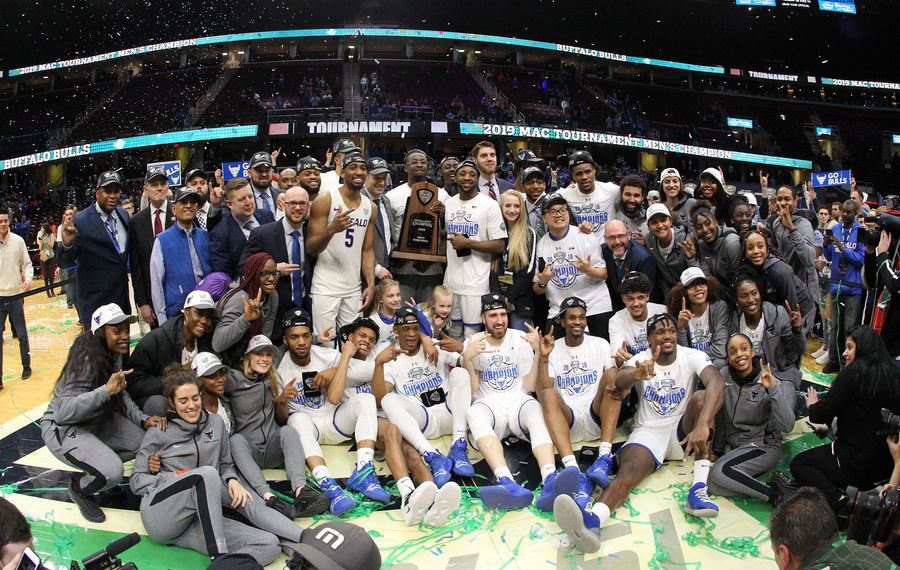 The University at Buffalo’s 87-73 victory over Bowling Green Saturday night for the men’s championship of the Mid-American Conference and an automatic bid in the NCAA tournament had a 6.9 locally rating on ESPN 2.

That’s a very strong rating for a college basketball game in Western New York, especially on the eve of St. Patrick’s Day when it competed with a Buffalo Sabres game.

But even bigger days are ahead for Coach Nate Oats' team judging by the local ratings for UB’s NCAA tournament games last season.

UB’s 89-68 destruction of heavily favored Arizona last March had an 11.7 local rating. Its 95-75 loss to Kentucky in the second round last year had a 14.3 local rating.

St. Bonaventure’s heartbreaking 55-53 loss to St. Louis for the Atlantic-10 title and an automatic bid in the NCAA tournament Sunday afternoon had a 2.7 rating on WIVB-TV (Channel 4), the local CBS affiliate. It was carried during the St. Patrick’s Day parade.

Games generally get higher ratings in the evening.

The hourlong Selection Show coverage on CBS carried by Channel 4 had a 4.4 rating starting at 6 p.m., which is 10 percent higher than the 4.0 national overnight average.

By comparison, the Sabres loss to Carolina on Saturday night had a 5.5 rating on MSG and the Sabres’ shootout win over St. Louis had a 5.2 rating Sunday evening.

The Sabres are averaging an 8.5 rating this season, though ratings have sharply declined in the last several games during a losing streak that just about ended their playoff hopes.

There isn’t a local rating available for the MAC tournament title game won by the UB women’s team over Central Michigan Saturday because the network it was carried on, the CBS Sports Network, isn’t measured by Nielsen.

Similarly, there is no rating for the semifinal A-10 victory by the St. Bonaventure men’s team over Rhode Island Saturday on the CBS Sports Network.