Two of Raiders' steadiest contributors had other ideas, however, in BSC's eventual 3-2 overtime win.

In stoppage time, center back Casey Derkacz tested Westside's Brian Wilkin with a curling free kick to the near post - the visiting goalkeeper did well to scurry across his line to push the shot away, but BSC midfielder John Grabowski pounced on the rebound, evening the match at 2 and giving his side new life.

90’: Raiders are level! Drama as Derkacz’s free kick is stopped by Wilkin but Grabowski cracks home the rebound. Clutch. pic.twitter.com/2Rja8ENiat

And fittingly, it was man-of-the-match Derkacz who knocked home the winner in extra time, and not without a little Irish fortune.

Demanding a quick throw-in from winger Colin O'Keefe, Derkacz sailed past a dozing defender, then tried to connect a wall pass with Kendell McFayden. Instead, his pass caromed off a Westside defender and sat juicily 10 yards in front of goal, and Derkacz was first to the loose ball to crack off Wilkin and in.

"Ultimately, the same thing that I wanted to happen happened," Derkacz said of his intended give-and-go. "Sometimes you just get a bit lucky, and I was just in the right position." 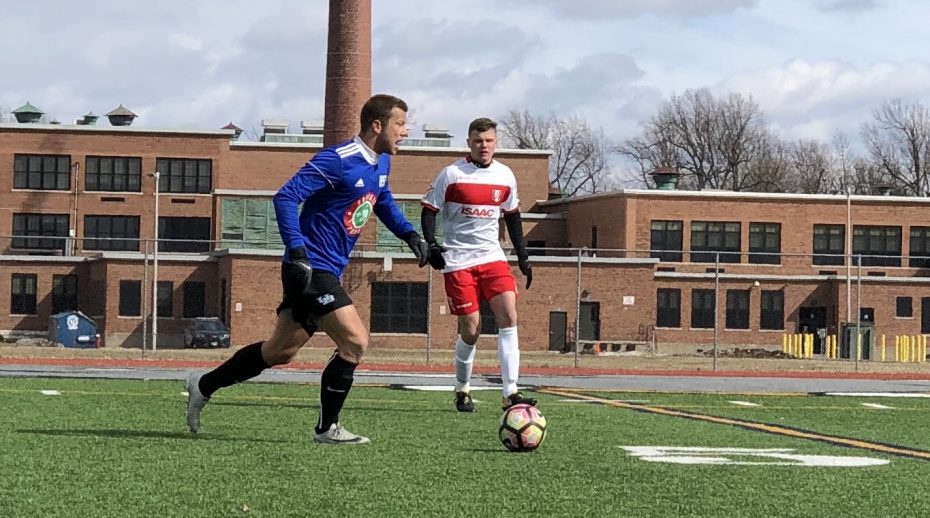 Raiders killed off the remaining 20 minutes to earn the opportunity to represent the Western New York Soccer Association in the USASA Amateur Cup.

"I think we were all tired, but it was a matter of us getting a little bit of rhythm," Derkacz added. "When Chris [Walter] got the red card we just had to come together, too."

The Thruway battle between the reigning men's amateur soccer champions in Buffalo and Rochester lived up to its billing, despite temperatures in the mid-30s, a stiff wind and legs rather unaccustomed to playing 90 minutes, much less overtime. The quality of soccer in the seesaw match wouldn't be confused for mid-summer form, but the 75 or so fans at Sparky Adams Field in Kenmore were entertained.

1-0, Westside, 13': Rocky Palmeiro's team got off on the wrong foot, as a Westside counterattack put the Buffalo side behind 13 minutes in. An overaggressive Raiders defense was vulnerable when Rochester center back Jeff Wild played a quick outlet to Nick Simone on the right. Simone picked his head up quickly and played Nick Tata sprinting diagonally down the right into space.

With BSC's help defense arriving, Tata sent Simon Garno in alone with a through ball, and Garno took a touch before snapping a shot off Raiders goalkeeper Noah Smith and in. 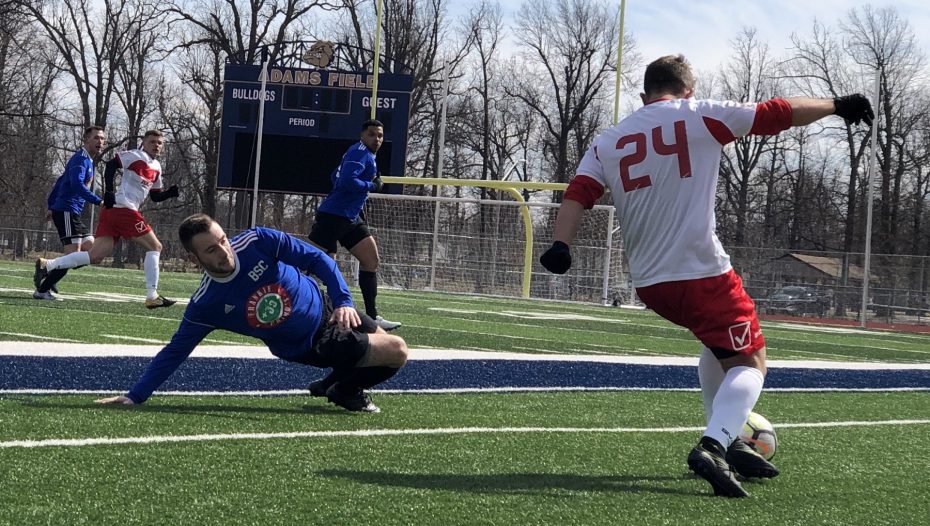 1-1, tied, 65': Despite knocking on the door for the 15 minutes preceding halftime - which saw Rudy Pikuzinski III smack a shot off the post and Wilkin make fine back-to-back stops on Williamson and Grabowski - BSC finally leveled at 65 minutes. Shielding the ball in the corner of the 18-yard box, by the end line, Black was pushed to the turf - and the head ref pointed to the spot. Derkacz blasted his penalty by Wilkin before he could react.

2-1, Westside, 73': A well-known poacher in the SUNYAC, former Cortland striker Nick Tata put the visitors back in front with a gorgeous 30-yard curler - which may have been aided by a slight deflection - that nestled into the side netting of Smith's left post. It was a pretty finish that placed the Rochester contender firmly in the driver's seat. 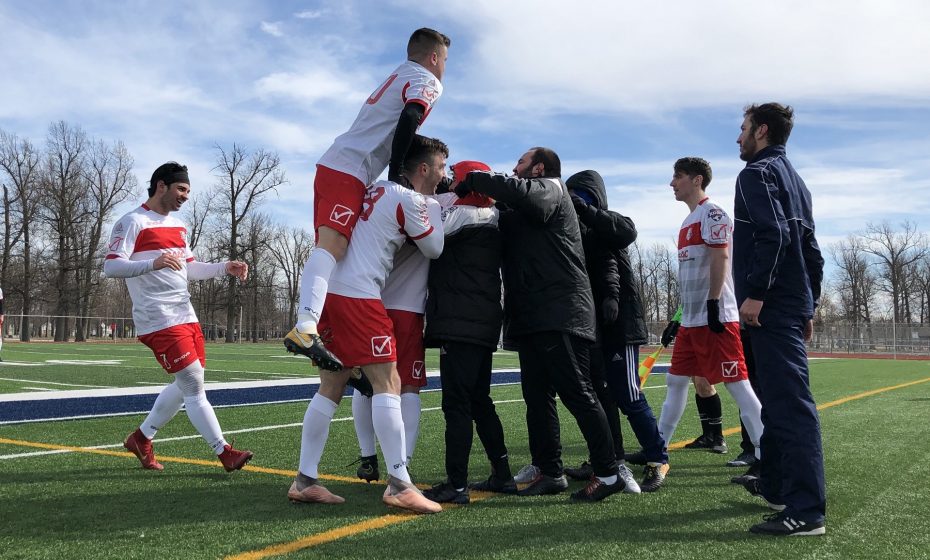 Red card, 85': Circumstances went further south for Raiders when Chris Walter earned his second yellow for a reckless slide tackle in front of his team's bench. The all-time FC Buffalo appearances leader had picked up his first booking earlier in the second half with a tactical foul to stall a Westside counterattack.

These events set the table for Grabowski's dramatic equalizer and Derkacz's overtime winner in what's easily the most memorable match in the three-game history of RDSL vs. BDSL. The Buffalo amateur men's league now holds a 2-1 advantage.

What's next: The first round of the USASA Amateur Cup Region I tournament will be held the weekend of April 6. More details to come on the Raiders' opponent; the nine participants may be found here. By winning the Tehel Cup last summer, too, Raiders will also represent the BDSL in the Werner Fricker Cup. 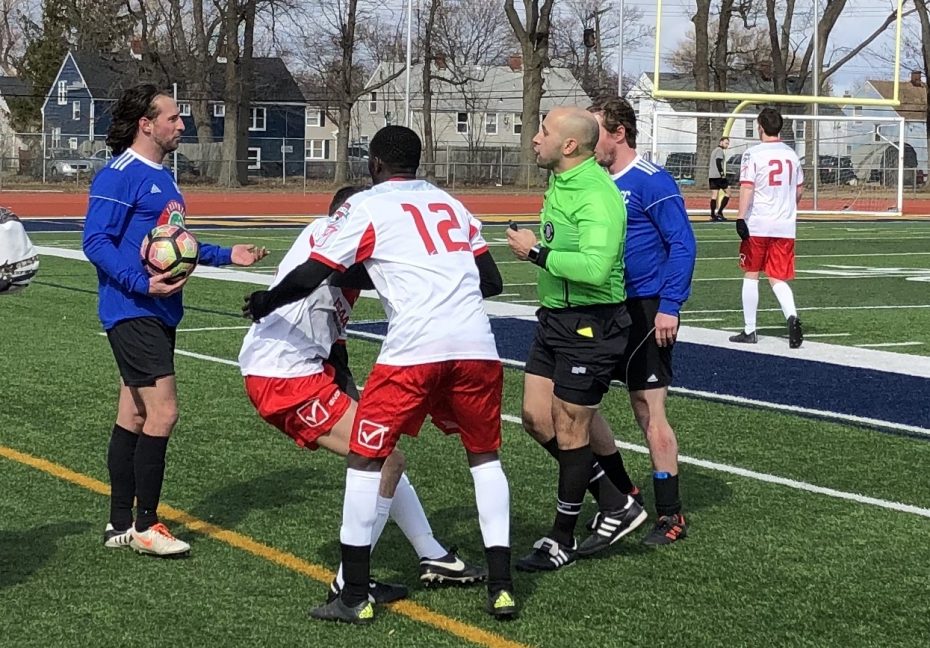