Kelly Sullivan, whose grandfather Albert was one of the five Sullivan brothers who perished on a Navy ship in World War II, is on a mission Monday at the Buffalo & Erie County Naval and Military Park.

At a 3:30 p.m. news conference, she will announce the start of a campaign to raise money for major repairs to the hull of The USS The Sullivans, the ship named in honor of her grandfather and his brothers. The decommissioned vessel is a major attraction at the Canalside park. 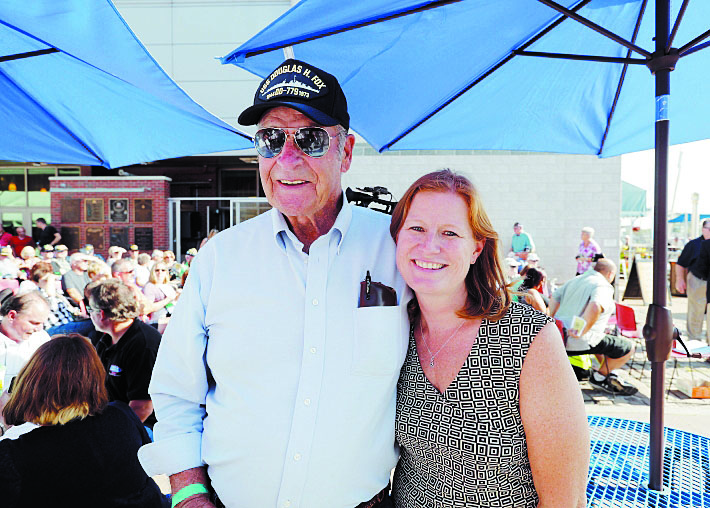 Kelly Sullivan, granddaughter of Albert Sullivan, stands with Bill Mackie, cousin of Jerry Reilly, in 2017 during the 27th anniversary reunion of those who served on the USS The Sullivans. (Mark Mulville/Buffalo News)

“I was in high school when they called and asked if I wanted to be a sponsor for the ship. I had no idea what a huge deal it was. When I got out to christen the ship, I started thinking about how my great-grandmother must have felt when she christened the first ship named after her boys just two months after they were gone,” Kelly Sullivan said.

The five brothers from Iowa, along with 682 other shipmates, were killed at the 1942 Battle of Guadalcanal in the Pacific Ocean when their ship, the USS Juneau, was torpedoed by the Japanese.

"There's a lot of serendipity going on here. A year ago, the wreckage of the USS Juneau CL-52 was found off the Solomon Islands," said John Branning, who serves as superintendent of ships at the Naval Park. "There is always some type of unique thing that happens around the time that Kelly visits here. This time it is the one-year anniversary of finding the ship."

In stressing the need to preserve the decommissioned Sullivans, Paul Marzello, the park's president and chief executive officer, said, “The park is looking for help with paying for the repairs so we can keep this spectacular piece of history in our Buffalo community for many years to come.”

Following the news conference, Kelly Sullivan will give a lecture on the second floor of the park's museum building. The theme will be "We Stick Together." It is scheduled to begin at 5:30 p.m. and is free and open to the public.