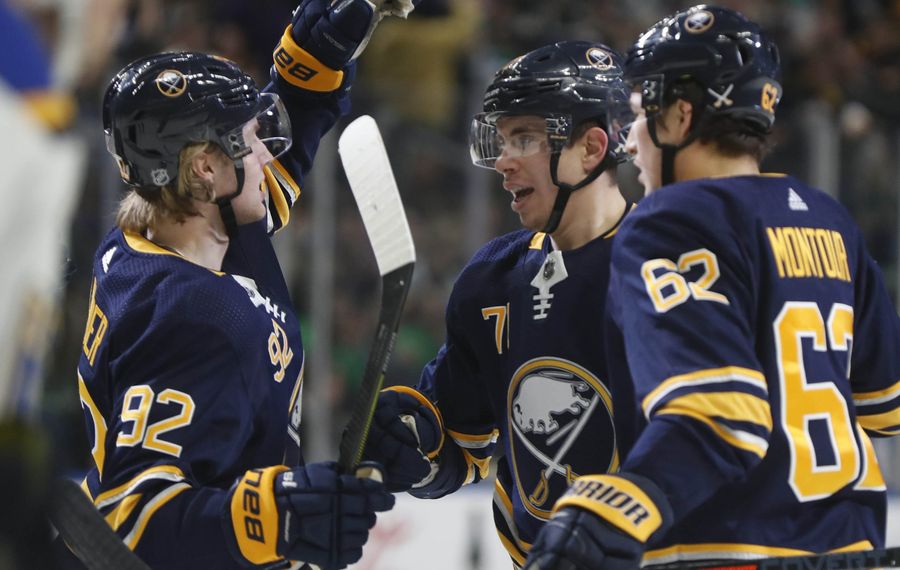 When another loss seemed inevitable, the Buffalo Sabres awakened the KeyBank Center crowd with five glass-wobbling hits in a span of 27 seconds late in the third period Sunday night. With the game slipping away again in the 3-on-3 overtime, Carter Hutton delivered six crucial saves.

And when their fate was determined in the shootout, Sam Reinhart scored in the third round to help snap a seven-game losing streak, secured in a 4-3 win over the St. Louis Blues. It was the type of result the Sabres (31-32-9) desperately needed — they had won only two of their previous 15 games — and bolstered the confidence of a roster starving for success.

While the aforementioned heroics prevented another game from slipping away, perhaps no individual performance was more important for the Sabres than that of 21-year-old winger Alex Nylander, who earned his first career multipoint NHL game with two assists.

Though Nylander did not score, the former top prospect is starting to show his teammates and coach Phil Housley that he can help this season and beyond.

"Touching the puck more, getting more comfortable," Nylander acknowledged. "I’m feeling a lot better from my first game already. I’m excited and happy for that. I just want to keep working hard every day here and, obviously, get better."

Nylander played only 11 minutes, 40 seconds and finished with two of the Sabres' 34 shots on goal, yet his 15 shifts were in stark contrast to his performance during a 3-0 loss against Dallas on Tuesday night — his first NHL game in almost one year and only the eighth of his career.

He did not look tentative in any of the three zones, and he did not hesitate when faced with the decision to either pass or shoot. His shot on Blues goalie Jake Allen early in the third period gave Conor Sheary a second-chance scoring opportunity, though Sheary was unable to dislodge the puck from Allen's leg pads.

With the score tied 1-1 in the first period, Nylander dug a puck out of the corner near his own blue line and quickly found Evan Rodrigues with a pass through the neutral zone. Rodrigues and Sheary skated down the ice for a 2-on-1, and the former broke an 18-game scoreless drought with a wrist shot from the slot at 14:48 into the first period for a 2-1 lead.

"I’ve been trying to talk to him a lot, making the game a bit easier for him," Rodrigues, who played with Nylander in Rochester, said of his linemate. "He has high-level skill, obviously. When you can let him know he has time or when he has to make a quick play it’s definitely going to help out his game. I think he’s starting to show off his skill."

The Sabres were outshot 6-1 during the first six minutes of the second period until Rasmus Dahlin made a breakout pass through the neutral zone to Nylander, who chose to pass to Sheary on the 2-on-1 because Blues defenseman Robert Bortuzzo slid toward him.

Sheary collected the tape-to-tape pass and shot over Allen's blocker for a 3-1 lead at 7:46 into the second period. It was the second time in as many nights Nylander created a scoring chance with a pass to Sheary, though neither connected on a goal during a 4-2 loss in Carolina on Saturday night.

"(Saturday) night, I probably owed him a couple with some of the passes he gave me and tonight we capitalized," Sheary said. "I think it’s just a confidence thing. He was here for a couple games maybe getting his feet wet and these last couple he’s been really good."

Nylander, drafted eighth overall by the Sabres in 2016, was recalled from Rochester on March 10, hours before Jack Eichel received a two-game suspension for a hit to the head on Colorado's Carl Soderberg. Nylander had only two career NHL points and had appeared in 165 games in Rochester, recording a career-high 31 points in 49 games this season.

Not only has Nylander remained with the team since Eichel's return, he was elevated to play with Rodrigues and Sheary on the second line. 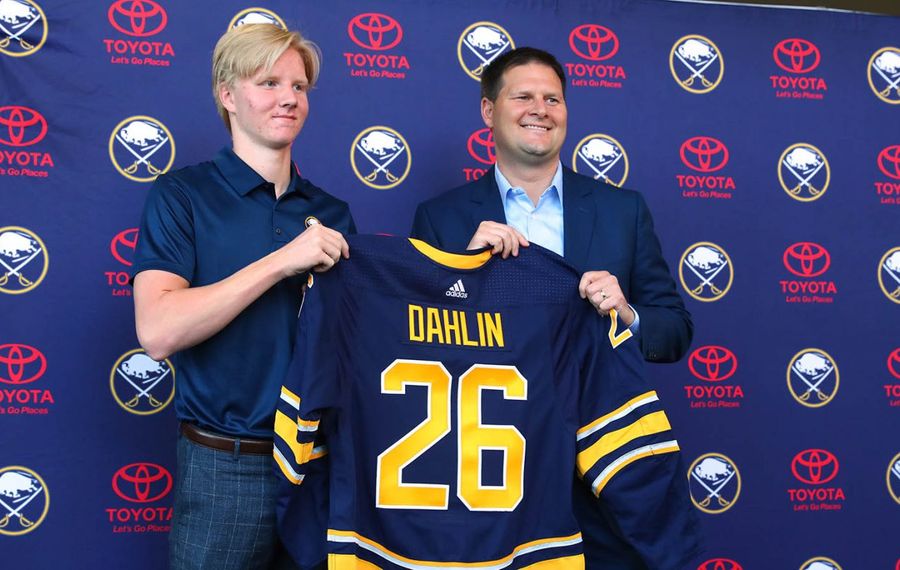 Those three were among the Sabres' best players against the Blues (37-27-8), who erased the two-goal deficit with goals from David Perron and Brayden Schenn. Sheary had a team-high five shots on goal, while Rodrigues added four. Nylander, meanwhile, had a 64 percent 5-on-5 shot differential and a team-best plus-2 rating.

"He’s gotten his step now," Housley said of Nylander. "He’s moving with the puck and he makes plays. Really nice pass to Sheary there. He just seems to get more confidence as the games go on here, and it’s good to see him contributing."

Johan Larsson broke the scoreless tie with a goal 6:42 into the first period. Hutton finished with 30 saves in regulation and overtime before stopping Ryan O'Reilly in the third shootout round to clinch the win. Eichel opened the shootout with a goal, and Reinhart scored his third shootout winner of the season, tying Nashville's Ryan Johansen and the New York Rangers' Kevin Shattenkirk for most in the NHL in 2018-19. Reinhart is one shy of the Sabres' single-season record set by Ales Kotalik in 2006-07.

Still, the Sabres will miss the playoffs for an eighth consecutive season and entered Sunday tied for the fewest points in the league since they won their 10th game in a row on Nov. 27. They have not won back-to-back games since Dec. 13. These final 10 games are as much about individual progress as they are about results.

General Manager Jason Botterill needs to see who can help the Sabres next season, and Nylander is hoping to be part of the solution.

"This was huge for my confidence," Nylander beamed. "It’s awesome that I get to play with those two guys. This opportunity has been great. I’m trying to take it."