Buffalo city officials hope to install an elevator at American Legion Post 721, but it'll be months too late to save Korean War veteran Norman Racki.

For years, older members of the post have complained about the 10 fairly steep stairs leading from an outside entrance to the downstairs bar area of the post, where veterans who survived World War II, Korea, Vietnam or other conflicts gather to laugh, watch sports on TV and enjoy a few beers.

Racki, 87, made it up to the top of those stairs on his way out of the city-owned building last Oct. 6. But he lost his balance and tumbled backwards, smacking his head on the way down. He died of a brain injury a week later in Erie County Medical Center.

“He was a very nice man and it was a shame that his life ended that way,” said Renee Ovitt, who lived next door to Racki in the Valley neighborhood, adjacent to Buffalo’s First Ward. “I’ve been to the post, and I always noticed that those stairs are dangerous. In fact, I’m surprised there aren’t accidents there more often.”

Post leaders and city of Buffalo officials are now planning for the construction of an elevator that will make the building on Cazenovia Street compatible with the Americans with Disabilities Act and make it easier for veterans – including some members in the 70s, 80s and 90s – to enjoy the facilities. City officials told The Buffalo News on Thursday they are hopeful that work on the improvements will begin by the end of this year.

Post 721 is believed to be one of many veterans posts in the Buffalo area that are not properly accessible under the federal law, according to Erie County Clerk Michael “Mickey” Kearns.

“These are old buildings, but important buildings,” Kearns said. “They provide a place for our veterans to get together and enjoy themselves. There are old and steep stairs in a lot of these buildings.”

Over the past three years – going back to his days as a state assemblyman – Kearns has spearheaded an effort to try to help veterans posts in Erie County obtain state funding for elevators or other physical improvements to make the buildings safer or accessible to people with physical handicaps. But no state grants have been awarded.

Kearns and some volunteers from the Barclay Damon law firm helped local veterans set up a nonprofit organization called Veterans Post Restoration of Erie County. Eighteen veterans posts – including Post 721 – joined the organization, whose purpose is to raise money or obtain grants to fund needed improvements at post buildings.

The Americans with Disabilities Act, commonly known as the ADA, is a federal civil rights law that went into effect in 1990.

The law makes it illegal to discriminate against people with disabilities by barring them from access to “all public and private places that are open to the general public,” according to the ADA National Network.

The ADA requires multistory buildings to have elevators or platform lifts to enable individuals with disabilities, including people who use walkers or wheelchairs, to readily move from floor to floor without using stairs.

“Stairs are never ADA-compliant,” said Jennifer Perry, an access specialist with the Institute on Employment and Disability at Cornell University.

The U.S. Justice Department bears responsibility for enforcing the access law, but buildings are not proactively inspected to see if they comply with the ADA, Perry said.

“It is a complaint-driven process,” Perry told The News. “Buildings are investigated if there is a complaint made to the Justice Department or a lawsuit filed in federal court.”

Building codes since 1992 have required new structures to be built in adherence to the ADA, she said, but there is no such thing as an old building being “grandfathered in” because of its age and not being subject to ADA regulations.

At the same time, the ADA only requires the owner of an older building to make improvements – such as adding an elevator – if the improvement is “readily achievable,” both physically and financially, Perry said.

“Some buildings may not be able to be made accessible because of their design or the expense involved,” Perry said. If there is a dispute about what improvements are “readily achievable,” that becomes a matter for the Justice Department or the courts.

According to James Oliveri, house chairman of Post 721, the building near Cazenovia Park is more than 100 years old. For decades, it served as the home for the Caz Park superintendent.

The American Legion took over the building in the early 1930s and rents it from the city for $1 a year, Oliveri said. The post currently has about 470 members, including about 20 whose service dates back to World War II in the 1940s.

The stairway makes it impossible for some of the post’s older members to attend functions, said James Liebner, a former post commander who now serves as its financial officer.

“I fell down the stairs myself five or six years ago … tore up my Achilles tendon,” Liebner said.

He said leaders of the post have been trying for “at least 10 years” to get funding for an elevator and other accessibility improvements. He said the post was already working on the problem with Kearns, city officials and the Veterans Post Restoration group when Racki fell and died.

“I was there that day, and it was horrible,” said Oliveri. “Everyone here loved Norm. Losing him was like losing part of the family.”

“There’s no excuse for what happened to Norm that day,” said Tom Whelan, 77, a retired Erie County sheriff’s deputy and a close friend of Racki’s. “This situation with the stairs should have been fixed years ago. A lot of the older guys have been complaining about it for years. It isn’t safe.” 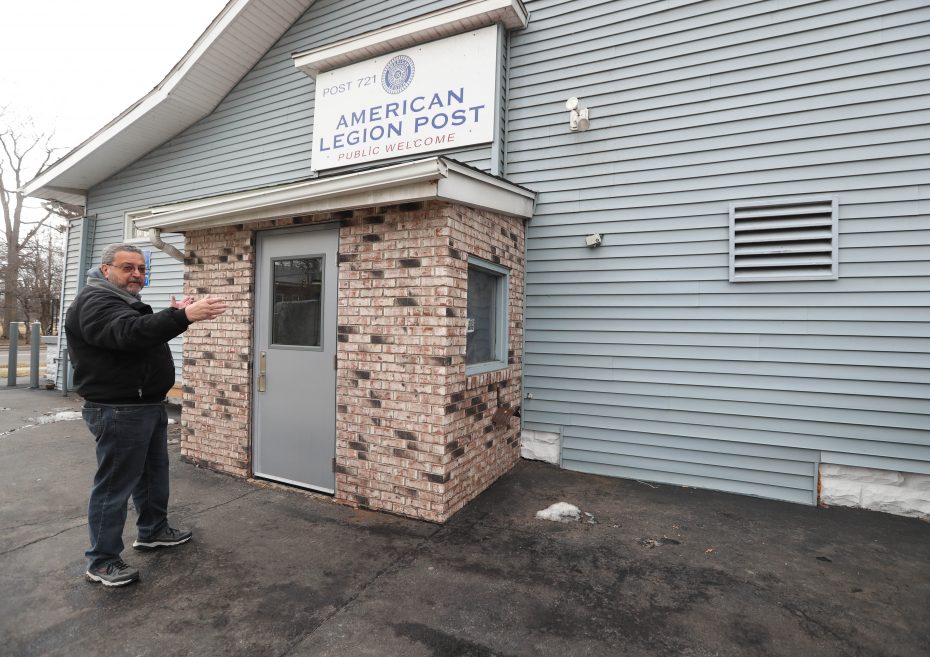 Jim Oliveri shows where a proposed elevator would be installed at the side entrance so that veterans would not have to navigate a fairly steep stairway to get to the post's bar. (Sharon Cantillon/Buffalo News)

Whelan said he contacted The News about the situation because he was worried that another elderly veteran could be hurt at the post.

"It would be terrible" if another accident occurred before the planned elevator is installed, Whelan said.

Both Oliveri and Liebner said they understood Whelan’s frustration, but the men also said they have been trying for years to get the problem fixed.

“Efforts have been made. The problem was not ignored,” Oliveri said. “We run this post on a shoestring. ... We’ve never had $250,000 lying around to build an elevator.”

A spokesman for Mayor Byron Brown said the city is seeking a grant from the state for an elevator.

The effort never made any headway until Kearns got involved and agreed to pursue funds from the state Dormitory Authority for the improvements, Oliveri said. He said South District Council Member Christopher P. Scanlon has also been helpful. Members of the Buffalo chapter of the American Institute of Architects have volunteered to evaluate posts throughout the county and advise them on what improvements are needed.

According to Kearns, restaurant owner Russell Salvatore, an avid supporter of veterans' causes, donated $50,000 to the fund last year to help another post – in Sloan – improve access for disabled veterans.

“My grandmother and Norm’s mother were sisters. Norm mostly kept to himself. He lived in the same house in the Valley his entire life. He was a very religious man who regularly went to church and loved going to that post, twice a week,” Ovitt said.

Oliveri said he is anxious to learn when state funding comes through for Post 721.

“Once that happens, we’d like to get it done as soon as possible,” Oliveri said. “This has been a long time coming.”

In association with the ADA National Network, Cornell operates a toll-free information line for anyone who has questions about the ADA and how it is applied. The number is (800) 949-4232.