The crew of three at the We R Nuts stall in the center of the Broadway Market has all heard it before – a big investment that's going to transform the 131-year-old marketplace.

This time, it's a pledge from Gov. Andrew M. Cuomo for $4 million.

Pearl Omphalius, who runs the roasted nut stand with her son, Kody, said Wednesday she thinks it may be just what the aging landmark needs.

"I don't see why not," Omphalius said, the alluring scent of butter, brown sugar and toasting nuts wafting from her shop.

"There are certainly barriers that will have to be overcome," she said, gesturing toward the empty vending booths, the tired decor, the dingy parking ramp and, of course, the dearth of customers.

"But why not? Why not overcome it?" she asked, offering a visitor a crunchy, glazed cashew.

Cuomo announced Tuesday that the state would invest $50 million in the city's East Side, including $4 million to turn the Broadway Market into a thriving, year-round destination.

Every year in the weeks leading up to Easter, the market springs to life. Thousands of Buffalonians – and ex-Buffalonians – make their annual pilgrimage to their favorite booths to buy butter lambs, long links of kielbasa, jars of hand-grated horseradish, sprigs of pussy willows and fresh loaves of rye bread. The parking ramp is packed with cars and the aisles are filled with eager customers.

But the rest of the year?

The Broadway Market tends to be on the quiet side. 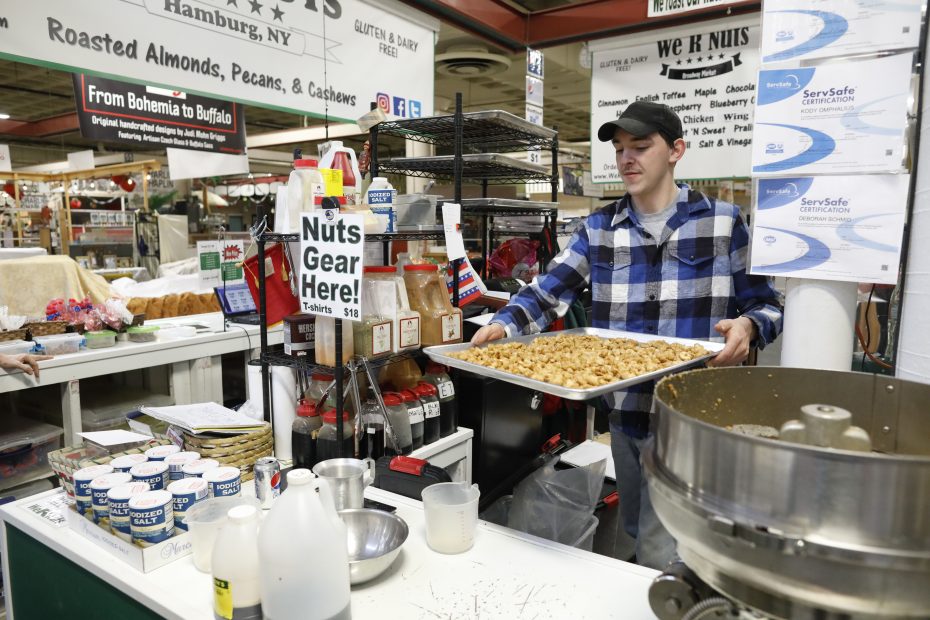 Kody Omphalius, owner of We R Nuts, mixes up batches of artisan candied nuts at his stand at the Broadway Market on Wednesday, March 13, 2019. (Derek Gee/Buffalo News)

Brady Johnson, 78, was among the sprinkling of customers Wednesday afternoon.

He said he drives to the market about once a week to enjoy a cup of coffee and have some breakfast.

He thinks the key to turning the market into a year-round destination is to make sure there are lots of booths and stores open year-round.

"You see these Easter people?" Johnson said, pointing to unattended booths nearby. "After Easter, they vacate the place. All the stores go away. That's always been the problem."

A grocery vendor nearby expressed the same sentiment.

"These are all part-timers," the woman said. She didn't want to give her name because she's worried it could affect her business. "They have to be here more than just Saturdays."

Kat Disto and Rain Kendig, who together run Kathrene's Cuisine – a Filipino food stand where they sell egg rolls and pancit, a stir-fried noodle dish – were thrilled to hear about the new money coming to the market.

Kat Disto said she'd like to see the money used to enhance security so that their stalls can stay open past 5 p.m.

"There are lot of customers who want to get food after work," she said. 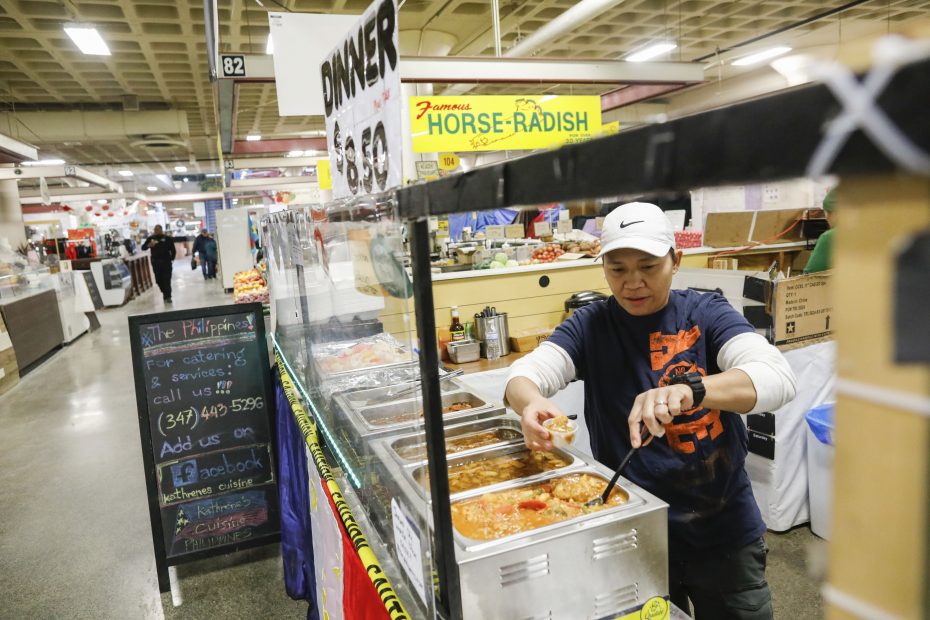 The goal of the $4 million is to help the Broadway Market mirror the success of other marketplaces around the country, such as ones in Boston, Cleveland and Philadelphia, said John Maggiore, a senior adviser to Cuomo.

"The Broadway Market is so much a part of Buffalo's heritage and it also has a potential to be a part of its future," Maggiore said.

To thrive, the market needs to attract a mix of people, he said – the people who want to visit the market for nostalgic reasons, the new immigrants who are moving into the Broadway-Fillmore neighborhood as well hipster food enthusiasts.

About $500,000 of the investment has been earmarked to develop a new plan on how to operate, manage and market the Broadway Market.

"The plan is absolutely key," said Maggiore. "We don't want to be playing whack-a-mole fixing a problem here, a problem there."

The rest will be used to make capital improvements to the interior and exterior of the building, which was constructed in 1956. The state's also interested in finding ways to better connect the Broadway Market to the Central Terminal nearby.

The $4 million comes on top of other improvements in the works, including new flooring, a commercial kitchen to help foster small food businesses, and a new police substation. The kitchen and substation are expected to open in a few weeks.

"We have made a lot of investments over the years," said Mayor Byron W. Brown. "It's essentially a center of community in that area of the city. We thought that was a good node to build out from."

Councilmember David Franczyk, who has championed the Broadway Market and said he shops there at least once a week, was pleased by the news about the new investment.

"I think what the governor did was extremely helpful," he said.

He thinks the market has the potential to draw young foodies from across the region. Like others, he said the market needs to keep offering Polish favorites and also cater to the burgeoning Bangladeshi community in the area.