The Buffalo Irish Center had been “trashed,” in the words of Mary Heneghan. Fourteen months ago, two middle-of-the-night intruders, their masked break-in chronicled by security cameras, broke through an entranceway and made their way to the main office, where they forced their way through another door.

Once inside, the burglars tore open a drop box. They hurried out with a safe containing $5,000 in cash, along with payroll checks and historic documents linked to the origins of the old South Buffalo YMCA on Abbott Road, reborn 49 years ago as a neighborhood center for Irish culture.

Heneghan has served as director for more than two decades. She watched as changing generations, and the exodus of many grown children of Irish-American origin from South Buffalo, led to a dramatic drop in membership. It placed more weight on the shrinking core of volunteers who maintain or host Irish dance classes, language courses, an Irish library, live music and even such neighborhood staples as fish dinners every Friday.

A year ago, Heneghan feared the burglary – no arrests have been made – might serve as a death blow. Combined with property damage, total losses climbed beyond $12,000. That was a fortune for a little community center whose dues-paying membership is 150, and whose active members are a fraction of that number.

Now, as Heneghan prepares for big crowds on this St. Patrick’s Day weekend, she welcomes you to stop by and admire a new mural that became the engine of an unlikely rescue.

“It helped to keep us open,” she said.

Before the burglary, directors of the the center had hired an artist, Judi Witt, to cover an exterior wall with a mural intended to portray both the symbolic journey of a family from Ireland to Buffalo, and the achievements of all immigrants. Completed last year, it features the grain elevators where so many newcomers once worked, as well as the St. Patrick's Day parade and other traditions of joy and faith linked to Irish heritage. 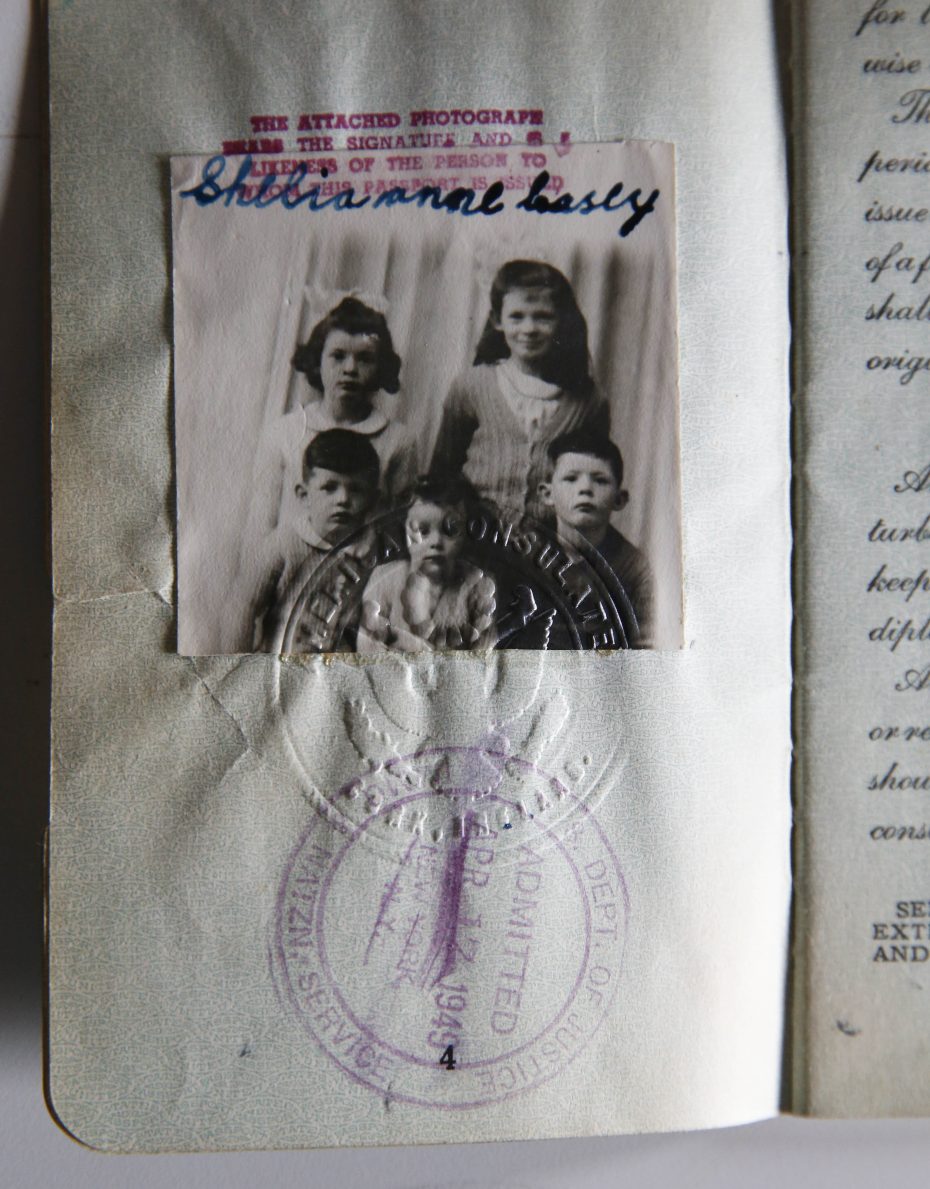 A passport from 1949, when the five Casey siblings came to the U.S. from Ireland. Top (left to right), Ellen and Sheila, bottom (left to right) are Bill, Mary and Brendan. Their mother, Catherine, was a selfless volunteer at the Buffalo Irish Center. She died 10 years ago, at 101. (Sharon Cantillon/Buffalo News)

To pay for it, the directors came up with a plan that involved painting a stone tower on the wall, alongside the mural. Donors could buy a "stone" in that tower and dedicate it to volunteers or neighbors who played a role in Irish center history.

Heneghan was hoping to break even. Instead, in the months after the break-in, the idea took off and made thousands of dollars more than expected. Heneghan believes part of that embrace came down to word-of-mouth about the center’s plight, a realization that a place always viewed as part of the South Buffalo landscape was suddenly in trouble.

There was also a more intimate factor. The center itself was already a kind of memorial. It exists only because of tireless efforts by a half-century's worth of volunteers, many who died without any monument. The stone tower gave families a visible way of saying thanks to parents and grandparents for everything they did through donations that started at $500, then went up.

The response has been so great, Heneghan said, that Kennedy Sign & Design – the outfit that painted the tower on the wall – is running out of room.

There is a stone, for instance, to honor Catherine Casey, who died 10 years ago at 101 on New Year's Day. She was an Irish immigrant who went back and forth in her youth between her homeland and Buffalo, finally arriving for good on Easter Sunday, 1949, with her husband Patrick and their five children. 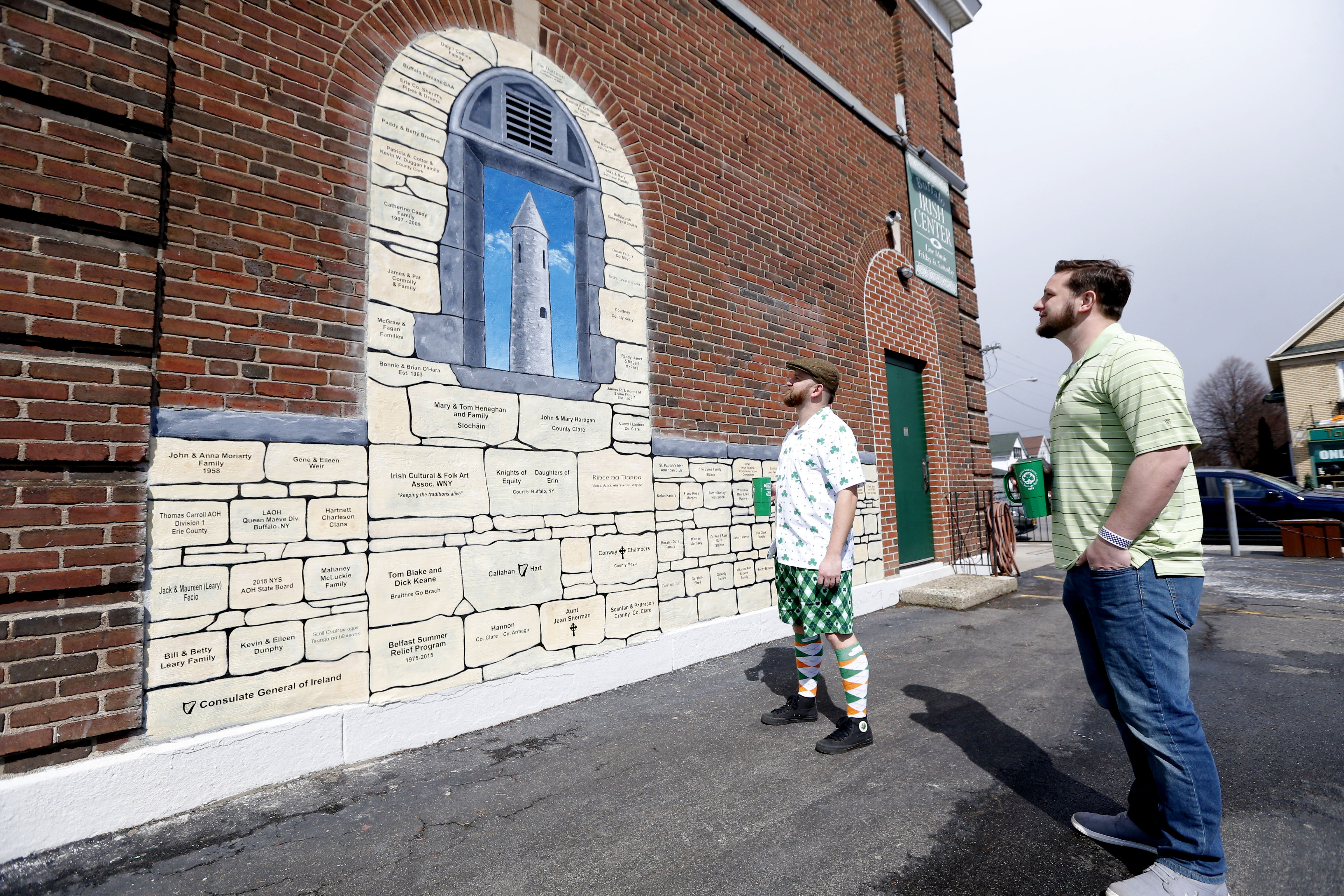 John Diggins, left, of Hamburg, and Kyle Wheeler, right, of West Seneca read some of the historic local names on a tower painted on the side of the Irish Center on Abbott Road in South Buffalo. This was on Saturday, March 16, 2019. (Robert Kirkham/Buffalo News)

Three of those siblings – Sheila Dorsey, Mary Casey Lynch and Brendan Casey, accompanied by Kathleen Lalley Casey, his wife – arrived at the center Friday to share tales about their family.

“We were blessed to be born over there,” said Sheila, who at 80 hopes to soon return to a longtime job selling concessions at Sabres games, once she recovers from hip surgery. Their mother, Sheila said, was always grateful for Buffalo because life had been so difficult in Ireland. Both Brendan and Mary were born at home, in a tiny cottage on a sprawling estate where their father worked.

Patrick eventually settled into a job at Bethlehem Steel, while Catherine became an annual champion of the St. Patrick’s parade, in which she marched until she physically could not do it anymore.

At the Irish center, Catherine was one of the main cooks, routinely presiding over corned beef and cabbage. Her children recall how she once prepared three entire turkeys at home and asked her daughter Ellen to drive them to the center, because Catherine and her husband never owned a car.

In saying farewell to Ireland, Catherine left behind many people she loved “but she never dwelled on it,” as Mary said. Her philosophy was that you kept working and looking forward, finding solace in your faith and in the kinship that always brought her back to the center.

"It was her home away from home," Brendan said, a feeling shared for years by the late Kay and Farry Conway, better known as Fred, a couple also born in Ireland. 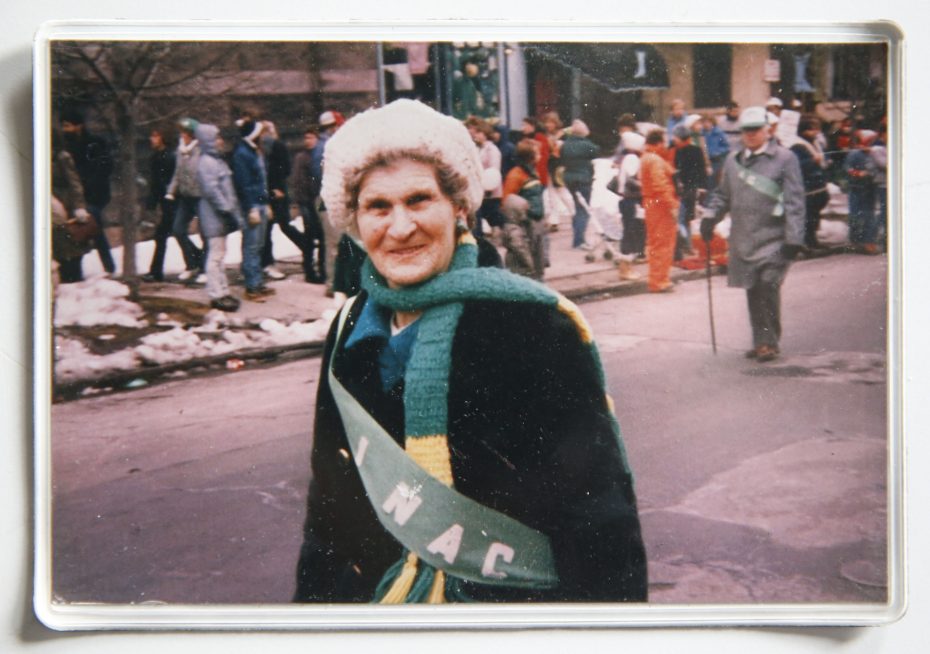 They arrived separately, in the early 1950s, and were married in Buffalo. While they raised their nine children in Kenmore, the Irish center was central to their lives. Fred Conway, who retired from a state job as a carpenter, was a founding member and served on the first board. Kay, for decades, was a volunteer.

Friday, two of their children, Mary Conway Reiser and Anne Conway Sullivan, joined the Caseys at the center. “They loved this place,” Sullivan said of her parents.

Their father was a storyteller, a guy always willing to share a joke. Their mother was far more serious, which led her husband to sometimes refer to her as “mother superior.” Fred's daughters can still point out exactly where their father wove his stories at the bar, and the family link to the center carries on:

Several of the 25 Conway grandchildren have taken Irish dance lessons in the building, taught there or played for the Buffalo Fenians, a Gaelic football team based in the building.

Fred lived to be 86, and Kay to 91. In 2001, one of their granddaughters, Kelly – who now lives in Dublin – asked them the kinds of questions about life we all wish we had asked our parents. She wrote it down when they told her how no one saw them off when they left Ireland. Their families were heartbroken, unsure of whether they would ever see them again.

Kay Chambers Conway recalled how a church steeple at Cobh was the last thing she saw as her ship left the harbor, before the peak vanished into the horizon and she turned her heart toward Buffalo.

To the Conway children and grandchildren, there was no question. Their parents deserved a stone on the wall.

All told, the mural not only paid for itself, it made a profit far beyond losses from the burglary and gave the Irish center a much-needed boost. To Heneghan and other officers, the urgent mission now is reaching younger generations. Those new members will decide whether the sense of community nurtured by that honor roll of volunteers continues to exist.

“Without this place,” Kathleen Casey said, “I think many of those connections would melt away.” 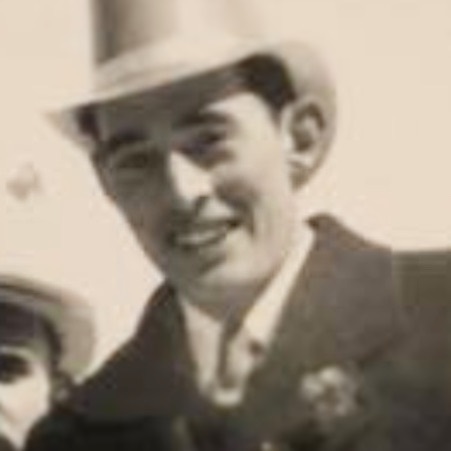