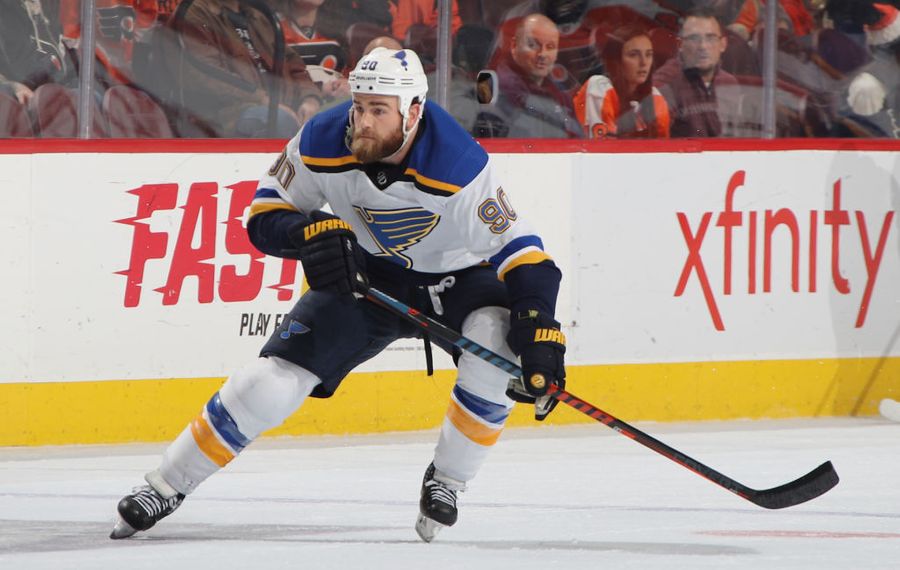 HAZELWOOD, Mo. – Ryan O'Reilly is in the middle of a playoff race, just as he hoped he would be in Buffalo but never got to experience with the Sabres. But when he got to St. Louis this season, things started out just as poorly as they ended in the 716.

On Nov. 28, the Blues were tied for last overall in the NHL at 8-12-3 and had already fired coach Mike Yeo. The Sabres, meanwhile, were first overall at 17-6-2. Initially, O'Reilly couldn't believe his misfortune.

"I remember actually talking with my Dad at the start of the year quite a bit," O'Reilly said after a recent practice in the Blues' suburban facility. "I was frustrated with the expectations we had coming in here, expecting us to be a force right from the start and getting reminded it's going to take time and to be patient with it.

"It's been nuts, a real roller coaster the whole year. But it's such exciting hockey, the hockey we wanted to be involved in. In the beginning of the year, it was tough but we kept fighting and working at it."

After being traded to St. Louis on July 1, O'Reilly will be playing his return game in Buffalo at 5 p.m. Sunday when the Blues make their lone appearance of the season in KeyBank Center.

It won't be a long visit. The Blues will be here less than 30 hours, arriving early Saturday evening after a matinee in Pittsburgh, playing the game in Buffalo and then heading to the airport around 9 p.m. Sunday.

"Obviously, it would have been nice to be there a bit longer, see guys, friends in town, have dinner, whatever," O'Reilly said. "But I'm looking forward to it. I think it will be an exciting game and it will be nice to go back there."

The trade is looming as an albatross over the Sabres as they wrap up their eighth consecutive season out of the playoffs. While O'Reilly became an All-Star for the second time in four years, Buffalo's return has been hugely disappointing.

Veteran center Patrik Berglund had two goals in 23 games and then stunned the organization by quitting on the team and returning home to Sweden, voiding the final four years of his contract. Fellow center Vladimir Sobotka has just five goals in 64 games and prospect Tage Thompson (seven goals, minus-17 rating in 60 games) has often looked overmatched in the NHL. In addition, the absence of O'Reilly forced rookie Casey Mittelstadt to spend plenty of time as the team's No. 2 center and he was not ready for the role, especially on the defensive end of the rink.

The Sabres also acquired a first-round draft pick from St. Louis, which could eventually end up in Anaheim as part of last month's trade to acquire defenseman Brandon Montour.

What kind of welcome?

The Sabres will undoubtedly acknowledge O'Reilly during the first period Sunday and it will be interesting to see what the fan reaction will be. No doubt that O'Reilly was a respected player during his three seasons but popular opinion changed in the wake of his infamous exit interview on locker cleanout day last April, when he said he had lost his passion for the game in the wake of a 62-point season.

"I have no idea. I don't know what to really expect," O'Reilly said with a laugh. "I do know it will be nice to have a lot of family coming down from Toronto and a lot of friends I don't normally get to see. But I don't really know what to expect.

"Being traded before helps a lot. It will be weird to be in that building, but at the end of the day it's two points we need so I have to focus on that. And it's nice having been traded before and knowing a little bit what to expect. I think it was more nerve-racking going into Denver with Buffalo than this will be."

And it's entirely different coming back in March when he's now fully embedded with the Blues than, say, having the visit early in the season in October.

"Absolutely. I'm comfortable and have confidence with this team," he said. "It's nice not being in the same division and playing them a lot. The first time we played Buffalo, it was still weird. I had so many friends out there on the ice."

That first meeting came Dec. 27 in Enterprise Center and O'Reilly scored the clinching goal in the Blues' 4-1 win against Buffalo.

"That goal sure felt nice," he said with a big grin. "And it was a big one for us too."

The Blues got their season turned around on the strength of goale Jordan Binnington, who won 13 of his first 15 starts after getting called up from the AHL and set a franchise record for a rookie with eight straight wins. They were a big part of a franchise-record 11-game winning streak. The final game of that run was a Feb. 19 overtime victory over Toronto, with O'Reilly getting the game-winning goal.

"That was definitely up there for big goals for me," he said. "It felt nice, living up there in the summer, to have that one. It was special. My phone was blowing up after it."

All Ryan O'Reilly wanted for a Christmas was a goal against his former club.
He got it. #stlblues pic.twitter.com/Z6YZWqxZv2

Best season of his career

With 11 games left in the season, O'Reilly is a top candidate for the Selke Trophy as the league's top defensive forward.

He has 26 goals, two away from the career high he set in 2014 with Colorado, and has already set career bests for assists (42) and points (68). He's also carrying a plus-22 rating, a huge turnaround from last year's minus-23 with the Sabres, and continuing to dominate at faceoffs by winning a league-high 950 draws. He's fifth in faceoff percentage at 57.1.

"I've been able to create a lot more at 5-on-5," he said. "The last few years, especially in Buffalo, I started relying too much on the power play to contribute offensively. Now I'm finding more ways to be a little bit more offensive-minded, read the plays better and create more. That's really where the plus-minus is coming from."

The Blues have seen exactly what the Sabres saw in O'Reilly's time here, especially in his first season. He's the first player on the ice at practice and St. Louis reporters have become conditioned to interview anyone else they want to talk to in the Blues' locker room before O'Reilly, because they all know he's going to be the last one off the ice.

"He's done a real good job obviously of playing well on the ice and first and foremost, he's been a very consistent player from day one to now," said interim coach Craig Berube. "Not been a lot of dropoff in his game. Very consistent.

"Saying that, that's how he leads by example. People see that and see the work ethic he puts in day in and day out, not only in games but in practice. Off the ice. First one at the rink. Last one off the ice. I mean, that's leadership."