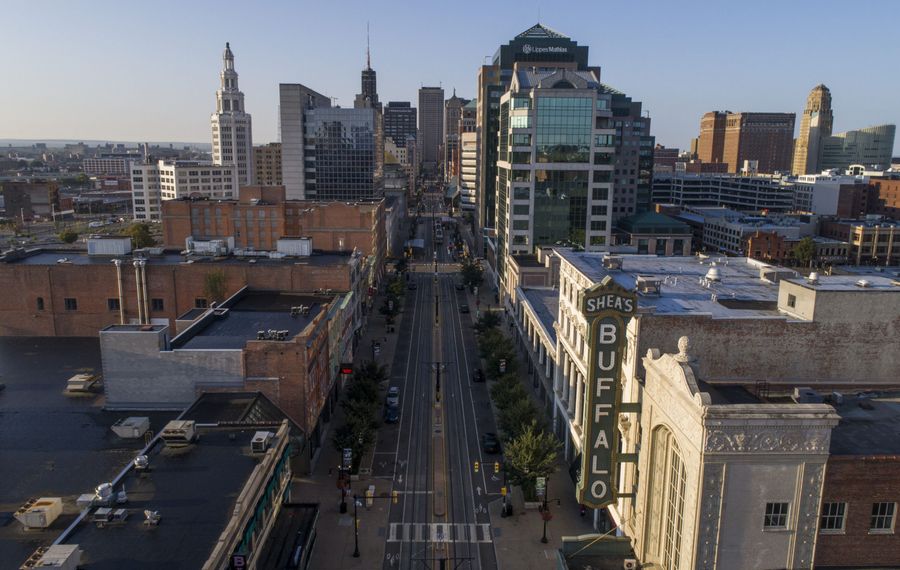 It's a federal program that sends millions of dollars a year to communities for everything from housing repairs to street paving.

Local leaders say they can't do without the Community Development Block Grant program.

President Trump, on the other hand, wants to get rid of it. He left the $3.3 billion program out of his budget proposal this week — just like he did in 2017. And, like last time, it will likely be restored.

"He typically reduces it significantly, cuts it out altogether, perhaps knowing that Congress will restore it," said Rep. Brian Higgins, D-Buffalo. "Congress, I am confident, will restore this cut."

But the program, created in 1974, already is a shadow of its former self.

When Higgins was on the Buffalo Common Council 25 years ago, the federal program provided the city nearly $30 million a year. Last year, Buffalo received about $13.7 million.

The program's supporters say its fate matters to a city like Buffalo, where 31 percent of residents and 47 percent of children live below the poverty level, according to census figures.

"This is not slush fund money, pork barrel money," said Buffalo Common Council President Darius Pridgen. "This is money that is going directly into some of the most devastated communities."

"Since 1980, and most recently in 2013, HUD studies found that CDBG is not well targeted to the poorest communities and has not demonstrated a measurable impact on communities," Housing and Urban Development spokeswoman Olga Alvarez said.

The CDBG program was created in 1974, when then-President Nixon asked Congress to combine federal anti-poverty programs into block grants.

The fight over the block grant program erupts regularly, usually when an administration seeks to reduce or cut the program.

Steven Malanga, a fellow at the Manhattan Institute, has called the program "one of the nation’s most wasteful and ineffective domestic-spending programs." The 42-year-old institute bills itself as a leading voice of free-market ideas which seeks to foster greater economic choice and individual responsibility.

Malanga said the anti-poverty focus has largely been lost."In New York State, they've given it to little towns to fix up their city halls," Malanga told The News. "They give it to after-school programs. And what's been lost over the years is that these are supposed to be anti-poverty programs," Malanga said.

"It's not surprising now that someone like Trump would say, 'let's get rid of it,' " Malanga said. "The program is vulnerable because for years, adherents of the program have resisted efforts to measure the results of the groups that get funding to bring accountability to the program."

But its political backers broadened the program's base of support by making more "middle-class communities" eligible, Malanga said.

Investigative reporting and HUD audits have revealed serious problems with how local governments have administered the block grants.

Buffalo has received hundreds of millions of dollars in CDBG funding over the decades, but reporting by The Buffalo News and Investigative Post, as well as analyses by HUD, have shown limited results.

In 2004, a News investigation showed much of the money was squandered through City Hall mismanagement, such as loans that were never repaid for development of the Theatre District and other efforts that did little to reduce poverty. A 2009 HUD report said Buffalo wasted block grants on top-heavy bureaucracy and by directing the money to upscale housing projects. A 2011 audit confirmed problems with job creation and delinquent loans. The development corporation's job-creation goal was 120 for 2008 and 2009, but only 46 jobs were added as a result of its lending program.

The half-billion-dollar bust: Federal aid poured into Buffalo for 30 years to combat poverty, but city officials wasted much of the opportunity it offered

Malanga cited Buffalo's troubled record in a 2017 article he wrote for City Journal.

"Among the most troubled CDBG-funded efforts, as Buffalo’s example underscores, are loans to help businesses in lower-income neighborhoods," he wrote. "Other cities have had similarly lousy loan experiences.

"The CDBG has sent some $150 billion to impoverished neighborhoods in Baltimore, Buffalo, Newark, and other struggling cities, with little or nothing positive to show for it," he wrote. "Worse, the CDBG has created a local patronage racket, funding politically connected nonprofits that do little to spur economic development."

A staple of development

Local government leaders vehemently disagree with the criticism and oppose any cuts.

"In a word, it would be devastating," said Jamestown Mayor Sam Teresi, whose city received almost $1.5 million last year in CDBG and other grants from HUD.

"It would be a fool's errand to propose and then to approve the elimination of these critically important and staple community development initiatives," Teresi said.

"This is one of those things that, from the perspective of mayors all across the country, is shocking, and we believe, just illogical," said Niagara Falls Mayor Paul A. Dyster, whose city received more than $2.8 million in 2018.

"If these funds are cut any more than they are now -- they really need to be increased -- we can count on some communities not seeing the growth that is needed," Pridgen said.

HUD determines the grants based on a formula that uses population, median income and even the age of housing stock.

"Those community block grants are an integral part of the revitalization of our neighborhoods," Pridgen said. "We depend on them, especially in the lower-income areas of our city. If those dollars go away, it's going to be very, very difficult to continue the infrastructure and programming needs of those communities."

"We have roads that have seen better days, community centers in areas that have no other recreation," Pridgen said. "For instance, in the Ellicott District, block grants helped the Friends of the Elderly building to do some repairs and additions, including the Pratt Community Center. These projects are important, especially to areas where you have high rates of poverty."

The city uses grants for everything from demolition of abandoned houses to after-school programs for at-risk youth and senior citizen activities.

Despite Trump's effort to kill the program, Buffalo actually received a $1.2 million increase for 2018-19 in the main CDBG program. It also received $3.25 million in the companion HOME program, a $950,000 increase.

Communities use HOME, often in partnership with not-for-profit entities, to directly subsidize rents for low-income people or to buy, build or maintain low-income housing.

In Buffalo, HOME money has been used to help create Parkview Apartments in the former School 59 on Best Street and the Mount Aaron Missionary Baptist Church senior facility on Genesee Street, to name two. 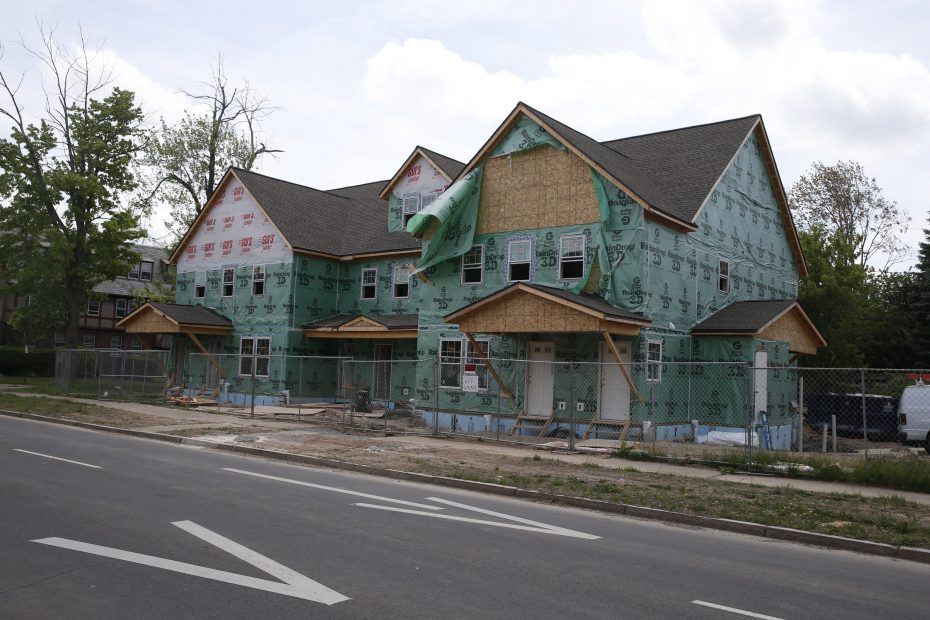 The current lineup of projects includes street repaving in Lackawanna and West Seneca; park restroom upgrades in Boston and Sardinia; senior center improvements in Lancaster, Brant and Evans; water projects in Springville and North Collins; and renovations to the Hollywood Theater in Gowanda.

"In the absence of a major infrastructure bill, these $100,000 contributions to various community improvement projects become very substantial," Higgins said. "It lessens the reliance on the property tax at the local level to fund those kinds of things."

Niagara Falls has set up a participatory budgeting process in which residents can vote on how to spend the federal money.

Since 2012, Niagara Falls has used CDBG money to assist nearly 400 home buyers and homeowners, along with more than 80 demolitions, 20 commercial facade renovations, 15 park improvement projects and an average of three youth programs per year.

"There's always more worthy projects asking for that funding than you could possibly fund in any given year," Dyster said.

HUD rules require the money to be spent only in portions of a community that meet low- to moderate-income thresholds. 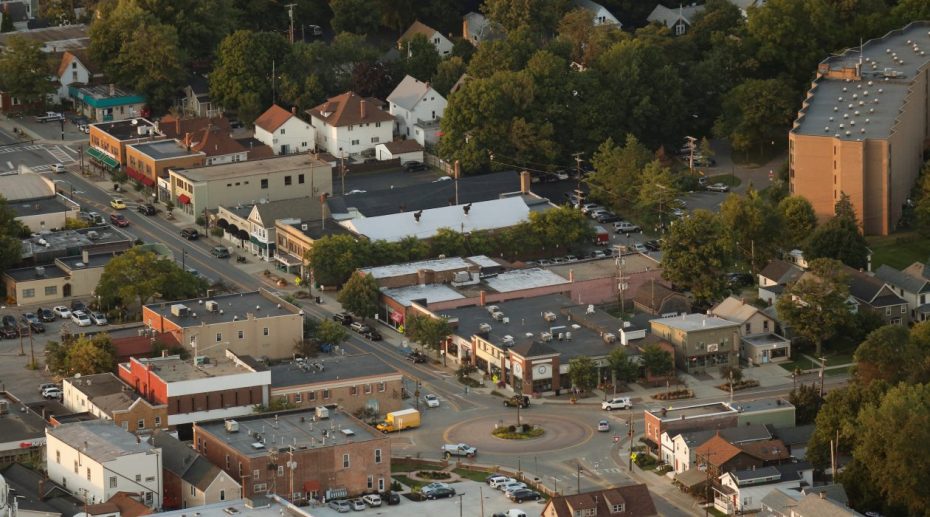 Because of income thresholds, HUD community block grants can only be used in certain sections of Hamburg. (Derek Gee/News file photo)

For example, Hamburg Supervisor James M. Shaw said his town's $407,000 in 2018 CDBG funds could be used only in Blasdell and Woodlawn, in a small part of the Village of Hamburg and in rural areas along the town's borders with Eden and Boston.

Shaw said the grants enabled Hamburg to repave roads and make infrastructure repairs in those areas.

"It took a tremendous strain off our local budget," Shaw said. "It really helped in the geographic areas where we needed the help most."

In Amherst, the bulk of the town's $575,000 CDBG program goes into a homeowner rehab program, where homeowners can access zero percent loans on their homes to do rehab work, said Laurie Stillwell, who coordinates the town's CDBG program.

"In a town of 125,000 people, you're going to have poverty, situations where people are in need of extra support," Amherst Supervisor Brian J. Kulpa said.

"A lot of it goes to emergency repairs," Stillwell said. "The seniors who take advantage of it, a lot of them are 'house-poor.' Right now our waiting list has about 60 people on it. It's a six to eight month wait if it's not an emergency situation."

"The town wouldn't have the wherewithal to offset construction costs for homeowners who need help with housing rehabilitation," Kulpa said.