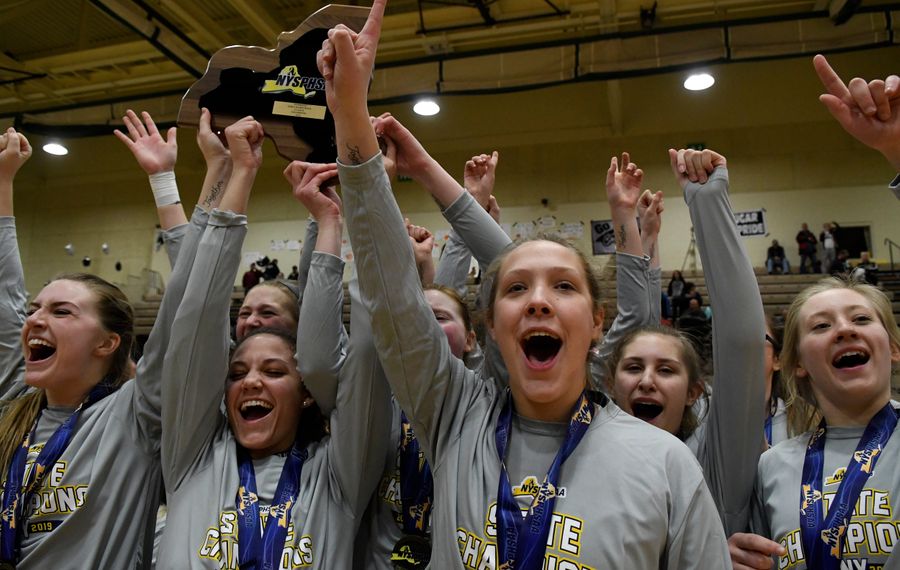 By Ryan Haymer, Special to the News

TROY — Dani Haskell would not be denied redemption.

And Franklinville would not again be denied its first state title.

Haskell made sure there was no overtime and no anguish like last year, when the Panthers watched Delaware Academy force overtime at the buzzer and prevail by three points.

“I had a chance to make two free throws at the end, so I told myself this is redemption because I missed the one free throw last year so they could tie it,” said the Canisius-bound Haskell, who was named Class D tournament Most Valuable Player. “So, I just talked to myself a little and said, ‘This is it.’”

Haskell, only a junior, has 2,570 career points, second in Western New York history. That is 377 points less than St. Bonaventure senior Mckenna Maycock's record when she played at Randolph.

Franklinville (20-6) became the first Section VI team to win a state title since Williamsville South in 2015 and the first in Class D since Clymer in 2010.

To capture the title, Franklinville had to beat the same opponent it beat in last year's state semifinals.

“We knew it was going to be tough, but we had faith as a team to get back here and that was our ultimate goal,” said junior Abby McCoy, who added 15 points and 11 rebounds to earn all-tournament honors.

Weathering some early turnovers against a hounding Cougars defense, a McCoy 3-pointer with two minutes left in the first quarter put Franklinville ahead 8-7, a lead it did not surrender the rest of the way.

The Panthers built a 40-27 lead early in the second half, but the Cougars would not go away and cut it to single digits with a minute to go in the third quarter. Haskell, fouled on a 3-point attempt, made two of three free throws to send Franklinville into the fourth quarter with a 51-37 advantage.

“She’s worked so hard to become a great player and to have a skill set I think is unlike anyone else we’ve played against this year or that I ever coached,” Franklinville coach Allan Dunlap said of Haskell. “So, she deserves everything she gets.”

When Edwards-Knox got within nine in the fourth, Haskell scored six of Franklinville’s final eight points to seal the win.

“Basketball is a game of momentum and it’s a game of runs,” Dunlap said. “At halftime, we said they’re going to have a run, and we just have to weather it. Our kids stepped up.”

Lucy Frary led Edwards-Knox (21-3) with 12 points. Abigail Hart added 11 points, and Carly Frary had nine before fouling out in the fourth quarter.

“Defense was key — our post players, Abby Burrell and Ariana Wolfer — they boxed out and they battled down low,” McCoy said. “I don’t think they get enough credit for that. Without them, I don’t think we’re here right now.”

Franklinville with return most of its team – saying goodbye to seniors in Wolfer, Renee Szymanski and Brianna Broadwell and Sara Wright — although the Panthers will have to contend in Class C next season.

“Our expectations will be much like they were this year — No. 1, win our league, and when we do that, make a run, win the section, win the regional and hope we can get back here and get another shot at it,” Dunlap said.