There was no sophomore slump for Maddie Elia, a 5-foot-10 second-year forward for the Buffalo Beauts.

Elia led the National Women's Hockey League with 12 goals and was tied for second in points scored behind linemate Hayley Scamurra. On Sunday, they will lead the Beauts into Isobel Cup championship game at 2 p.m. in Saint Paul, Minn., against the host Minnesota Whitecaps, which beat the Metropolitan Riveters, 5-1, on Friday.

The Beauts are playing in their fourth consecutive championship game and hoping to bring home their second championship after winning in 2017.

Elia, who grew up in Lewiston, attended Nichols School and played youth hockey for the Bisons, took time after practice this week to talk with the News about the season, playing professionally with women she grew up with and motivation to win this year's Isobel Cup.

Buffalo News: The Beauts won eight of their last nine games, including the playoff semifinal. What turned things around?

Maddie Elia: I think we just came together more as a team. We kind of implemented some new systems and that kind of got us going. Also, we wanted to play well for our new coach (Cody McCormick). So a lot of things went into play. We were hanging out more, getting to know each other a little bit more, settling in from the beginning of the year.

BN: What was the significance of the coaching change? How did that impact the team?

ME: Obviously, it's a change. We wanted to look at it as a positive, looking forward, new systems. It had a positive impact based on how we have been playing.

BN: With the postponement of the other semifinal, the Beauts gave up the chance to host the Isobel Cup final, and will play it in Saint Paul regardless. How are you approaching the final knowing you'll be on the road?

ME: Whether it was at home or away, we had to win the game so I don't think the venue matters. I think we're still going into it with the same mindset. Obviously, it would have been nice to play in front of our home fans, but we know they'll be supporting us know matter what. We're excited. 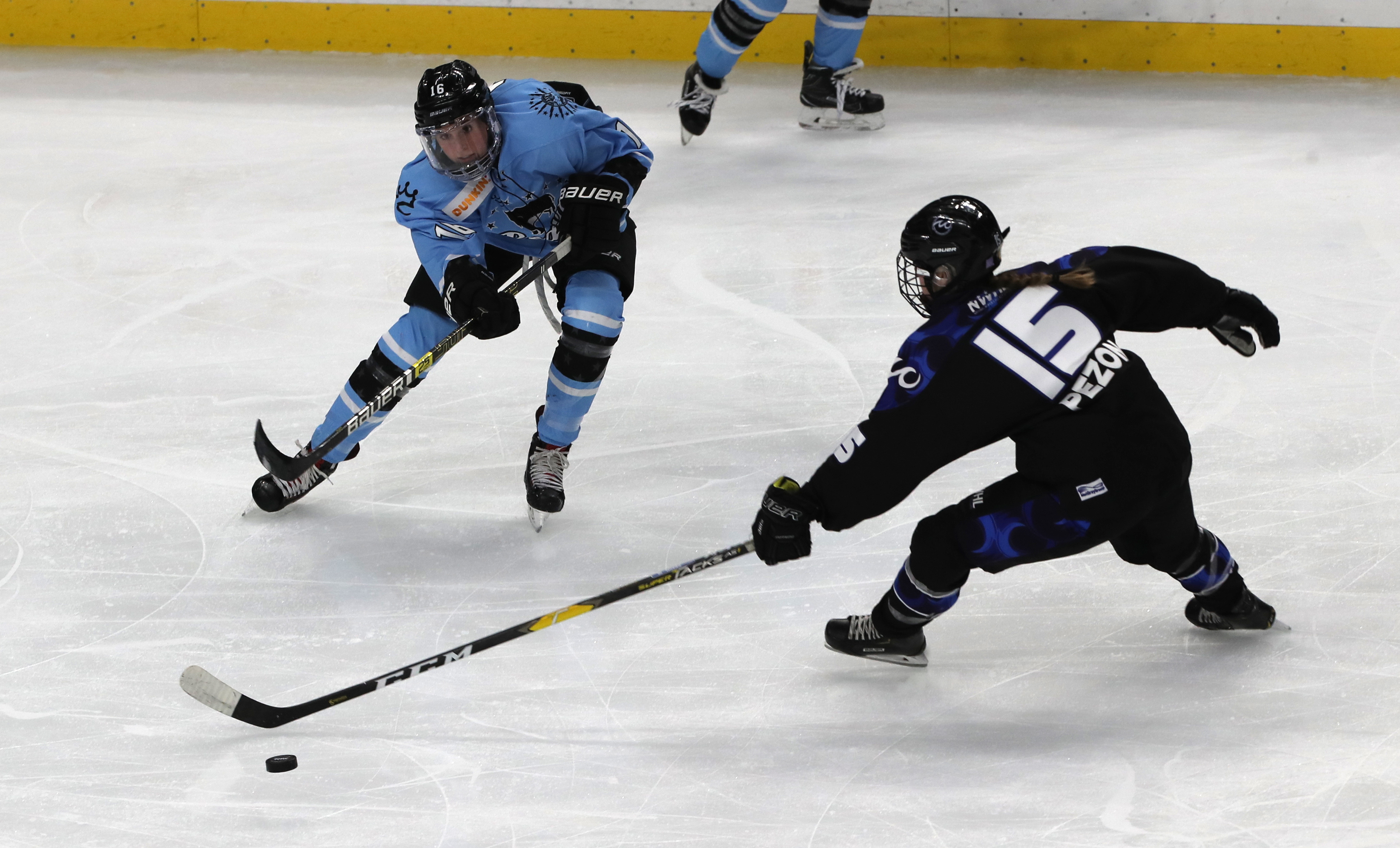 Buffalo Beauts forward Maddie Elia, left, led the NWHL with 12 goals and tied for second in points with 19. Elias and the Beauts will play for the Isobel Cup on Sunday at 2 p.m. in Saint Paul, Minn. (John Hickey/Buffalo News)

BN: The Beauts are undefeated at Harborcenter this season but only 4-4 on the road. What has been the major challenge for the team on the road and how do you get over that hump in the final?

ME: Road games are always tough. You're playing in a place that you're not used to. Going down there, we have to ease into it. We're going a few days early so we can get a little more acclimated to the area and get settled in there. I think that we will take it as another game, not going to look at it as we're playing in Minnesota.

BN: What are some of the things you have to do to be successful in the championship no matter which team you play?

ME: Not let the nerves get the best of us, but keep doing the same things we've been doing. Play hard. Obviously it's our last game, so we don't want to leave anything at home, we want to bring everything we have, bring everything we've learned. We want to have good practices leading up to the game and I believe we'll have success.

BN: You played at Nichols and for the Bisons, like many of your teammates. What is it like playing professionally with many of the women you grew up with?

ME: It's a big advantage. We've known each other for a while, so it makes us a little more comfortable when a new girl comes. Jules (Iafallo), Annika (Zalewski), they come into the team knowing familiar faces, so I think it's easier for them to settle in, be comfortable, be confident. I think that's huge, especially being from Buffalo and being able to represent our hometown.

BN: Has that helped the chemistry of the team overall, having that familiarity?

ME: I think so, and also the new girls coming in from out of town, obviously, are awesome and they fit in perfect. So everyone has been getting along whether they are from Buffalo or not, and I think that is really good.

BN: You lead the league in goals scored and you're tied for second in points behind Hayley. How did you develop the chemistry with Hayley that has allowed both of you to be so successful this season?

ME: I played with her all last year. We played together at Nichols and had a rivalry in college, so I think just playing together. Obviously, Hayley is an awesome player and adding Dani (Cameranesi), I'm pretty lucky to be playing with those two. (Elia went to Boston University; Scamurra went to Northeastern.)

BN: Last year you had five goals and nine assists and this year you increased it to 12 goals. What has been the difference for you?

ME: I worked hard this summer. The skills skates that we do with the (Academy of Hockey at Harborcenter), just working on the plays we're not really used to. Getting into the scoring areas, the slot. I think playing with Hayley and Dani. They find me. Most of my goals, if you watch the highlights, have been in front, just picking up rebounds, so I think just being in the right place at the right time.

BN: Last year, the Beauts played in the Isobel Cup final and lost. Did that serve as motivation for you this year?

ME: Last year our goal was to win the cup and we came one game short. This year it was to finish off the season how we had planned. We worked hard this summer. We learned new skills and I think going into this year we just needed better focus and we have been strong on that.

BN: Is there anything you want to add about the season?

ME: It's been an awesome year, a lot of fun. Getting to know everyone, getting to know the new girls. I think this is probably the closest team I've been on. I'm really excited for this weekend and hopefully we can finish strong.