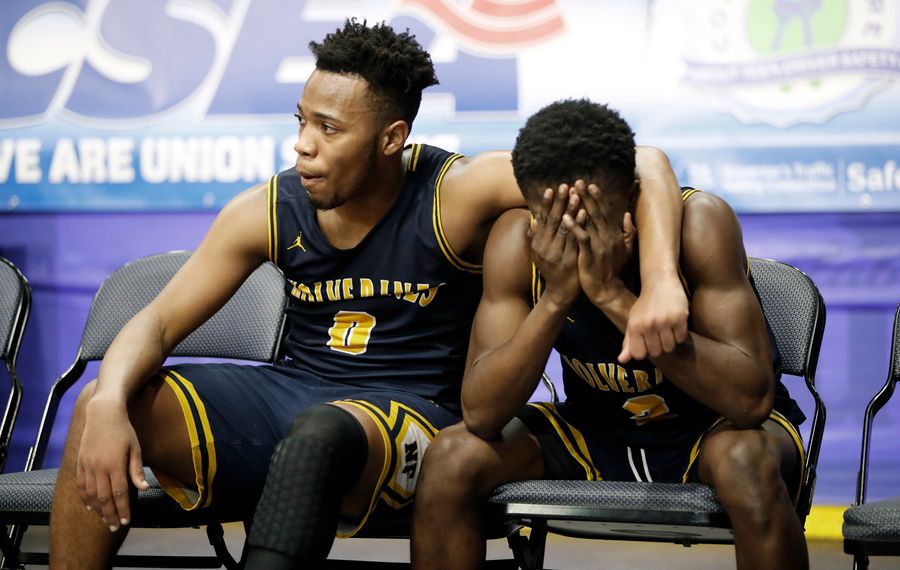 BINGHAMTON — The shot attempt from the right corner looked good coming out of Willie Lightfoot’s hand.

Same could be said for Josiah Harris’ game-winning try 37 seconds earlier on a Friday evening in which he seemed to be the only Niagara Falls Wolverine on fire from beyond the arc.

Neither one went through the hoop. Nor did another Lightfoot chance in between those shots.

Instead of heading to a nearby hotel in preparation and anticipation of playing for a state championship, the Niagara Falls boys basketball team boarded its charter bus for the long, quiet and undoubtedly sad ride home to the Cataract City.

The best season in a decade for the Wolverines is over, as Section III champion West Genesee hung on for a 59-57 victory in a Class AA New York State Public High Schools Athletic Association semifinal before an estimated 3,000 fans at Floyd L. Maines Memorial Arena.

For the second time in three games, Falls (21-4) found itself down by double-digits (this time 12 points) in the fourth quarter only to mount a furious comeback. The Wolverines pulled within 58-57 with 1 minute, 2 seconds left.

Plenty of time to pull out victory from the jaws of certain defeat much like they did in a comeback overtime win over Williamsville North in the Section VI final — when they trailed by more with a minute left than the deficit staring them in the face Friday.

Except, the iron proved to be unkind the rest of the way — much like it had been for most of this Class AA semifinal for the Wolverines. Falls shot 33.8 percent, while the Wildcats sank 43.1 percent.

“We didn’t shoot it as well as we’re used to shooting the ball,” Wolverines coach Sal Constantino said. “Their size gave us trouble around the basket. There was a time when we were down 12 and we could’ve quit. We could’ve just packed it in but that is the character of this group of kids.”

Harris fueled Falls’ comeback bid by scoring 12 of his game-high 22 points in the fourth. He missed from NBA range, just a little long with 39 seconds left and West Genny leading by one. Lightfoot missed from the left corner 30 seconds later.

The most painful miss was the last with 2 seconds left as that one from Lightfoot looked like it was on target. It would’ve given Niagara Falls, making its first Final Four appearance since 2009, the lead.

“We were hoping it would go in,” Constantino said. “Old saying is you live by the three and you die by three, but I thought we got good looks. The ball just didn’t fall tonight.”

Against a tall, athletic foe – Falls scrapped for rebounds on the inside and battled a West Genny crew with three players standing 6-foot-6 or taller to a stalemate in total rebounds (38-38). But the Wolverines settled for perimeter shots instead of attacking the basket much like they did in last weekend’s state quarterfinal win over Rochester McQuaid.

Though Falls came in with three players shooting 38 percent or better from three-point range, it had a bad day Friday. The Wolverines finished just 26.5 from beyond the arc. Harris went 6 for 12, but everyone else shot a combined 3 for 22.

Junior Jaemon Turner had 15 points for Niagara Falls, which trailed 32-31 at halftime after a putback by Naim Bradley. Falls led 33-32 early in the third, when the Wildcats took the lead for good on a 16-2 blitz in which the first five baskets came off layups or short jumpers in which West Genesee (21-4) took advantage of its height and athleticism. Chris Benson had six points, while Lucas Sutherland four.

“We’re just small,” Constantino said. "The kids put in the effort, they were just bigger and stronger."

West Genesee led, 48-38 after three quarters and quickly stretched it to 12 on a Jack McLane putback. Just when a blowout seemed to be brewing, the Wolverines scratched and clawed their way back into it.

So much so that they didn’t just have a look at the end, it was a legitimate shot.

“The further you get the more painful the (final) loss is,” Constantino said. “Right now, the kids are really beat up about it but I said ‘I’ll just think about Jaemon Turner getting hot against Orchard Park. Jalen (Bradberry) taking the charge against Will North. Niam Bradley, a kid coming off the bench and hitting a big three against McQuaid. ... How Willie stuck out as a catalyst for us.’

“It’s been such a pleasure for me to watch the kids have fun.”

“It hurts but they were the better team at this point,” said Harris, a senior. “You have to live with it.”