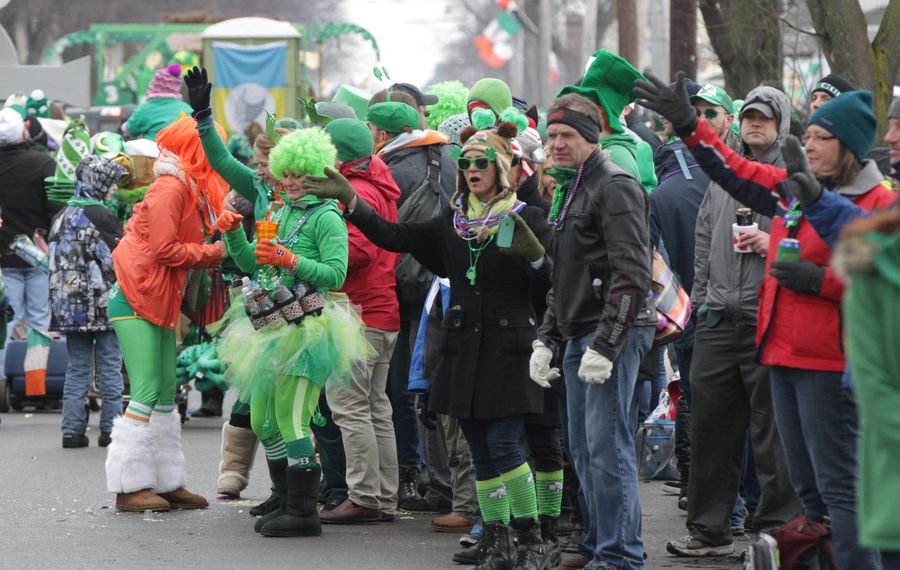 As I’d forecast back on Monday, there should be no illusions about the chill in the air this St. Patrick’s Day weekend despite Thursday's 66 degrees.

The weekend chill will have a little more harshness for the Old First Ward parade than for the Sunday parade. A high-resolution model indicates there may be an occasional hookup with Lake Huron for some fleeting flakes of no real consequence. It’s the wind in combination with temperatures in the mostly low 30s which will numb some protoplasm. The spacing of the isobars depicted in this graphic plus some hard numbers suggest a west-northwest wind of 15-25 mph with some stronger gusts producing a wind chill near 20, sometimes colder.

As I paternally advise every year, alcohol may induce a feeling of well-being, but it dilates the blood vessels in your skin, and they send your body heat up into the sky. So, if a laughing someone is dressed with a crazily porous outfit, trouble could lie ahead even amidst the laughter.

Sunday is a somewhat different matter in terms of wind chill.  Temperatures will still be cold, but the wind will be less of a factor. Note the wide intervals between the isobars early Sunday afternoon in this model. That means less of a breeze.

None of this is to suggest Sunday will feel much better than Saturday … just a little better. We’ll have low 30s again, with wind chill in the mid 20s. Believe me, you’ll notice the difference. There should be a little more sun on Sunday than on Saturday as well.

The upper air pattern for Monday still assures us of below-average temperatures on Monday (average high being in the low 40s). The warm ridge is still out over western North America, and the cold trough is in the east.

Temperatures do begin edging back into the 40s around midweek. Beyond that, there are signs of a significantly more moderate pattern setting up after next week. But what might be the chance of any significant snow during this preceding shot of cold weather? Not much is showing in the models and ensembles as of this writing. The most optimistic model is the American/GFS which shows paltry totals by March 25th. The totals include the spotty minor amounts which will fall Friday night, the 15th.

There are a couple of models which show some potential for several inches on the hills Friday night and Saturday the 16th with the WNW cold flow from Lake Huron. Moisture will be forced up the slopes of the hills to the south. That would be a high terrain accumulation, not impacting the Niagara Frontier to any real extent. So, it appears those few municipalities closer to Buffalo lifting winter parking rules may get away with it.

By the end of next weekend, the upper level flow looks markedly different. Pacific air will be flooding the lower 48 states with arctic air being shunted back to the north.

I’m not prepared to forecast these next few cold days will absolutely be the last wintry hit of cold weather for the season. That’s not usually the way Great Lakes climatology works out this early in the season. However, extended range model ensembles do suggest the benign Pacific flow will begin to dominate much of the time. In this GFS ensemble mean for midweek during the last week of the month, there is no upper air pathway for arctic air to reach us in the westerly Pacific flow.

The Canadian GEM ensemble is even more aggressive with the warming upper air in the east. The coloring alone seems to tell the story.

Courtesy of Dr. Michael Ventrice of IBM’s The Weather Company, we can take a look at near surface temperature departure from average from March 23-27 in the European ensemble. Again, the colors help to tell the story.

Those departures, or anomalies, are pretty healthy in the east and line up well with previous ensemble runs.

We’ll finish up with some unbridled statistical optimism from the American CFS model for the month of April, with the caveat of a warm bias which often shows up in this model.

For any yawners out there, yes, we know in April it usually gets warmer. What the CFS is showing is a tendency for temperatures to run warmer than April averages over a 30-year period. So that would equate, if accurate, to typical April warming + additional warming.

I’ve had a few social media friends ask if they should take off their winter tires yet. If I had the winter tires on my sedan I should have (I don’t), I’d leave them on at least another 7-10 days, just due to climatology for mid March. The extra wear and tear on the tread over 7-10 days won’t make a measurable difference in your tread life. But if my forecast of no major snow were to go bust, you’d only have to be mad at me for the forecast. But then you could celebrate your snow tires still being on as evidence of your wise foresight. There, now I’m covered!