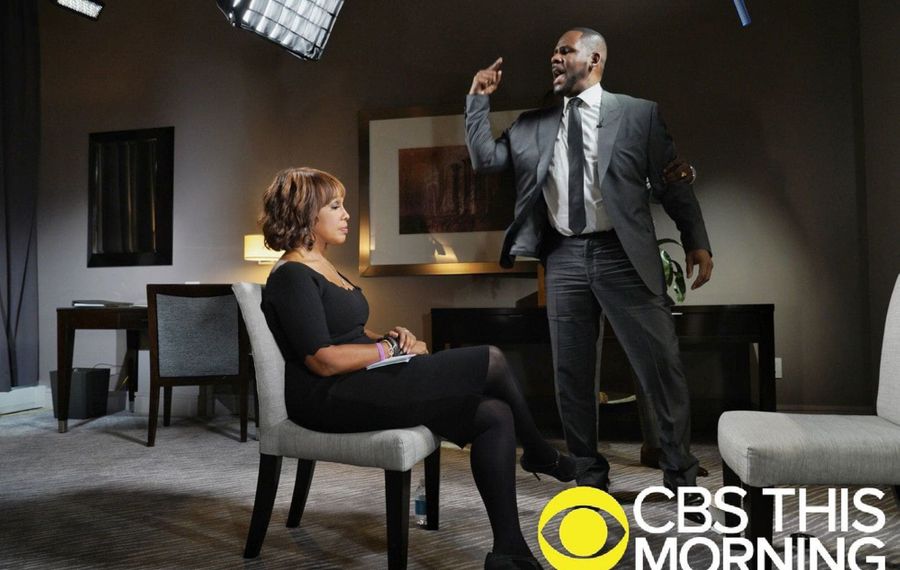 Now there's a sentence not often found in journalism that intends to be serious. But the most revealing thing seen anywhere in the typhoon of coverage of Gayle King's preternaturally poised interview with R. Kelly for CBS' Morning News was TMZ's TV show.

By now, it has become a genuinely fabled moment in TV history that will be long remembered among those everywhere tasked with interviewing celebrities who are losing it big time (and, of course, their audiences).

R&B star R. Kelly--whose alleged sex life with underage girls has come under legal scrutiny before--has been indicted on 10 counts of criminal sex abuse with four alleged victims. That's a class 2 felony. The charges followed the Lifetime Network's mini-series "Surviving R. Kelly," a thorough look at a private life which seems to start at unsavory and then go south from there.

Kelly has always denied wrongdoing and was acquitted in the big case. But in the #metoo era, there was no way his flagrant "lifestyle" was going to escape toxic gossip and, at the very least, very tough scrutiny.

And that is what preceded King's interview which will be, henceforth, one for the books. From now on, anyone who wants to see a celebrity flamingly "unhinged" in front of a microphone and camera will always have R. Kelly and Gayle King as Exhibit A.

What people these days call the optics with pseudo-sophistication (i.e, what's superficially visible on screens and online) were brutal and hopeless for huge-selling and talented Kelly: a large man in a gray suit screaming and crying and flailing his arms while standing over a much-smaller female interviewer who sat motionless.

Kelly once played pro basketball in the USBL for the Atlantic City Seagulls. He is 6 feet 1 inch tall, according to bios. When a man that size is wildly waving his arms over his head and is caught by a camera at low angle, he can't help but look large and menacing.

King--whose subsequent candor was as laudable as her steely poise--admitted almost immediately that "I never thought he was going to hit me....What I was really thinking to myself was 'I'm not done with this interview, so I'm going to let him have his moment. If I stand up, even to comfort him, that could have been his invitation to say 'this is over.' So I didn't interrupt his anger and let him have that." She later told Stephen Colbert that her only fear during the whole thing was that with all that wild flailing about that he might accidentally smack her in the face.

There's another way to look at it which TMZ cynically understood.

Kelly, according to King, has a history of tempestuously walking out of interviews.

And now let's be blunt: at that moment she had already scored that dubious thing we have always called great television": A large, out-of-control 52-year-old man screaming and crying at cameras while his interviewer remained stony. Vince McMahon would have loved it.

It was unforgettable. It was also great television for  a CBS morning show which has always had the reputation of being morning TV's newsiest and least-trashy (translation: stuffiest).

And that's where TMZ gets the American Media prize for most revelatory coverage of an archetypal TV moment.

One of the things video has taught us all since the beginning of the age of the VCR is what wonders can be found in slo-mo playback. It's the basis now for instant replay all over the sports world.

It's what happened when TMZ's fingers on the replay button slowed the interview down and caught in an unmistakable freeze frame, a half-smile on King's face while Kelly was standing up and in the most seemingly dangerous part of his tirade.

King has admitted knowing his tempestuous reputation for walking out of interviews. By simply asking obvious questions, she had her unhinged moment from him.

It got even better for TV (but worse for Kelly). She kept him calm by staying calm herself and--with perfect psychology--calling him back to even keel by repeatedly calling him Robert.

Read up on Kelly and you quickly encounter the widespread understanding that he was more than a bit of a Mama's Boy who has publicly credited his mother for all sorts of well-being and success.

Repeatedly saying Robert had, for so many of us in the audience, the unmistakable echo of an exasperated mother calling an uncontrolled kid back home from the outer edges of tantrum. The only times my mother ever called me Jeffrey--as if she were reading it off a school enrollment sheet or a driver's license--were when I needed to be reeled back into something resembling civilized behavior.

That is exactly what King did to 52-year old ex-Mama's Boy Kelly. It was intrinsically hilarious, of course, that she just couldn't avoid the flash of a half-smile on her face.

And then after all the laudatory commentary came, what I found to be the most interesting part of the whole archetypal King/Kelly affair was Friday's hour of television devoted to the interview and CBS' News' reportage around the event.

This was a hastily arranged hour of prime-time news television. What I found so revealing was how loaded it was with entertainment advertising--especially for big-budget movies.

Big movie ads were once the staples of big city newspapers. That ended as soon as big studios could afford to withdraw them and save money. They concentrated everything on the biggest city papers--the Timeses of both coasts etc.

For the big money movies--the horror and superhero stuff--they concentrated on TV.

And when a sudden crack opened up in the TV schedule that revealed the possibility of a large, sudden viewership from a demographically profitable audience, attuned to pop music and charges of sexual misconduct, CBS rushed in with what they had. And there was money in it, in case anyone ever doubted it.

And there was Gayle King, Oprah's best pal and former producer with decades of experience surfing on top of the zeitgeist, staking out prime time-territory on behalf of a morning show whose reputation was originally formed, pre-disgrace, by Charlie Rose's scholarship (rather than his privately and reputedly open robe).

Is it any wonder that the slo-mo fingers of TMZ's wiseacres on the playback button were able to find an unmistakable half-smile freeze frame while King's larger "optics" might have told her audience she was afraid for her life?