No one knows yet what the town center will look like at Eastern Hills Mall, but some University at Buffalo graduate students have spent the past 14 weeks envisioning what they would like to see.

For their capstone project, 24 graduate students in UB's School of Architecture and Planning researched and created a concept, complete with a scale model of their design. Throughout the project, students had their work evaluated and critiqued by key players on the real Eastern Hills Mall town center: Uniland Development Co., design firm Gensler and the Town of Clarence.

"Students learn best when they take what they learn in the classroom and apply it to the real world," said Mark Foerster, UB senior fellow in the school's real estate development program. "What better than to envision what to do with this amazing property that had a wonderful life and now is going to be born into something different?

The students considered all the same elements that will be important to Uniland, Gensler and the town: demographics, character, sustainable growth.

To draw people in, students suggested integrating art into the center's public spaces, creating a craftsman and artisanal atmosphere and creating a wellness component with biking and walking trails. They also suggested turning water runoff into an asset by incorporating boardwalks and fountains into retention ponds.

[Related: Ohio's Crocker Park offers a glimpse at what Eastern Hills might become]

To abate some of the sprawling development on Transit Road, students suggested setting a better example by creating more density in some areas of the center, while balancing it with breathable green spaces and other open areas.

While Uniland and Gensler said they were inspired by the students' work and liked a lot of what they saw, the students don't have formal input.

"We'd be delighted they adopted any of the ideas we came up with," Foerster said.

In reality, the town center will likely be built in phases over a period of seven to 10 years. 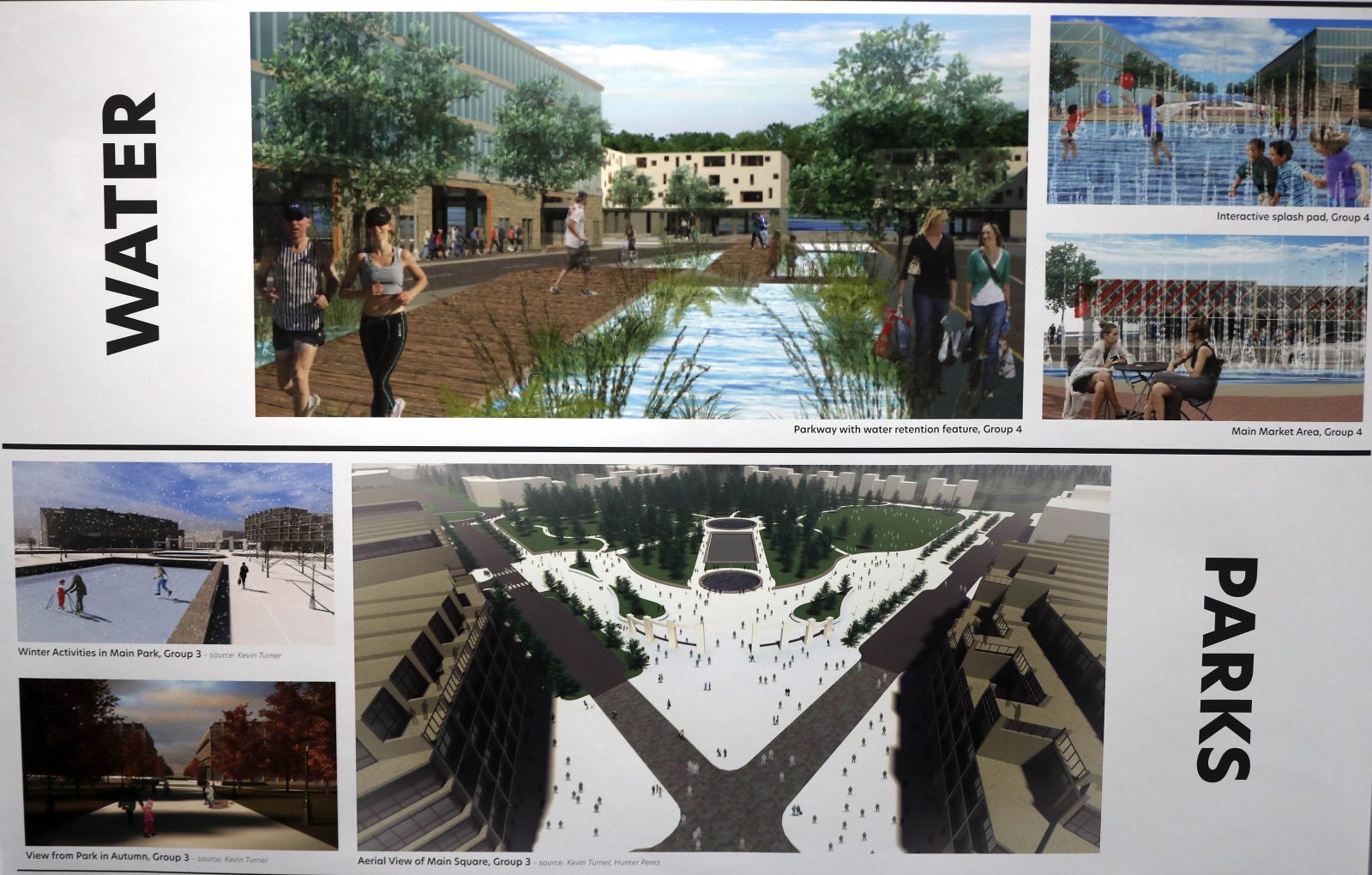 Some of the different concept designs created by UB architecture students for the Eastern Hills Mall. (Mark Mulville/Buffalo News)

"You'll see a cluster of development every couple of years or so driven by the market dynamics of the moment," Montante said. "It's a nice situation to be in depending on supply and demand and the community needs of the moment."

Each phase will be self-contained and able to work on its own until the other phases come along.

The Eastern Hills Mall has fallen victim to the same trends that have wrought havoc on other regional enclosed malls throughout the country: falling foot traffic, changing consumer behavior and competition from online retailers. To adapt, the mall will transform itself into a town center; basically a self-sustaining community with apartments, entertainment, restaurants, entertainment and community spaces.

Clarence Town Supervisor Patrick Casilio has been a supporter of the town center redevelopment. The town approved rezoning in August that made the project possible.

In January, Eastern Hills Mall owners Uniland and Mountain Development chose Gensler to design the redevelopment. Gensler expects to have a master plan and branding concept ready by fall. Throughout the year, it will be working on market research, a financial feasibility study and communicating with the town to make sure its plans are acceptable, Bruffett said.

Uniland is looking to incorporate ideas from the community as well. To share your thoughts, visit Uniland.com/eastern-hills-mall-redevelopment.