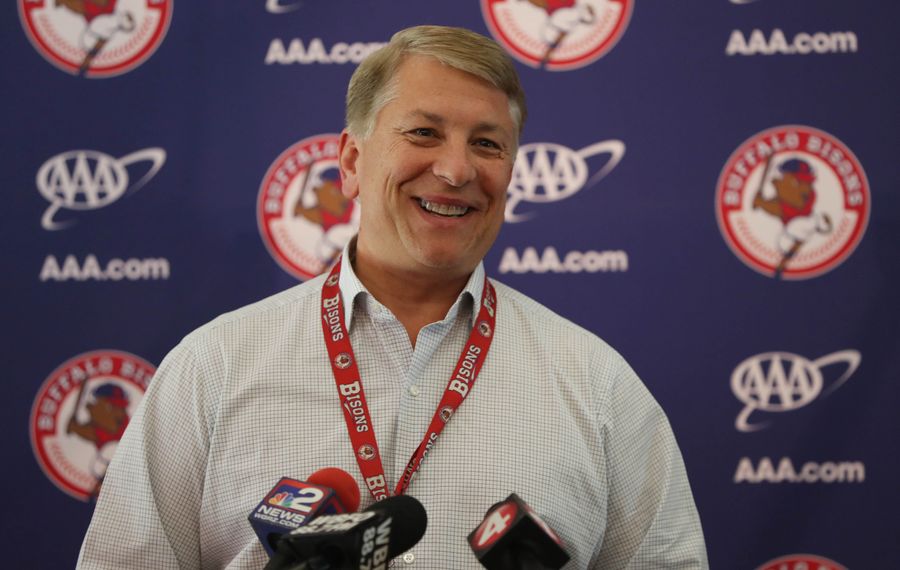 Mike Buczkowski, the longest-tenured general manager in Buffalo Bisons history, has been promoted to president of Rich Baseball Operations and will now manage the three affiliated minor-league teams owned by Rich Products, the Bisons announced Wednesday.

Buczkowski, 54, began his career with the Bisons as a public relations assistant in 1987. He has been in the GM role since 1993 – the longest run in the franchise's 135-year history. He will continue to oversee the day-to-day operation of the Bisons along with assistant general manager Anthony Sprague, but will also now supervise the Double-A Northwest Arkansas Naturals and Class A West Virginia Black Bears.

“Mike is a trusted leader across our entire baseball footprint, including here in Buffalo with the Bisons as well as in Northwest Arkansas and West Virginia, and his promotion serves as outstanding recognition for Mike’s deep commitment to Rich Baseball Operations,” Joe Segarra, chief operating officer of Rich Entertainment Group, said in a statement.

“At the same time, Rich’s is fortunate to retain Jon’s vast experience in community and government relations. He has developed deep and meaningful relationships within Buffalo and will continue to drive initiatives that help transform our city.”

Northwest Arkansas is a Texas League club whose nickname is a tribute the state nickname of "the Natural State" and the filmed-in-Buffalo movie "The Natural." It is a Kansas City affiliate. West Virginia, a New York-Penn League team that opened play in 2015 at a new ballpark near West Virginia University, is a Pittsburgh affiliate. Rich Baseball moved the Jamestown Jammers there following the 2014 season.

In addition to his baseball responsibilities, Buczkowski serves on the boards of Western New York United Against Drug and Alcohol Abuse, the Greater Buffalo Sports Hall of Fame and the Buffalo Bisons Charitable Foundation.

Buczkowski's grandfather, Huck Geary, played shortstop at Offermann Stadium for the Bisons from 1935-37, and was a member of the 1936 Governors’ Cup championship team. Geary played for the Pittsburgh Pirates in 1942 and 1943.

The Bisons have won three league championships during Buczkowski's tenure, winning the final American Association title in 1997 and taking the International League's Governors' Cup in 1998 and 2004.  They open play in newly-named Sahlen Field on April 4 against Scranton/Wilkes-Barre. The signage for the ballpark's new name was being installed at the Washington Street gate on Wednesday.

Dandes, who was instrumental in the development of food and guest services for Pilot Field's opening, will continue to represent Rich Baseball Operations as treasurer of the New York-Penn League and chair of the finance committee of the Texas League. He had served as president of Rich Baseball since 2001. In his new role, he will be concentrating on Rich Products' philanthropic efforts.

Dandes joined Rich’s in 1986 as a product manager and was named vice president/general manager of Stadium Services, Inc. in 1988, and executive vice president of the Rich Entertainment Group in 1996. Dandes currently serves as chair of the board for the Buffalo Zoo, Erie County Medical Center and the Buffalo Public Schools Foundation, and is vice chair of Upstate New York Transplant Services.