If you need someone to sling around a chunk of wood that resembles a telephone pole, John Katalinas is your guy. After competing for years in such track and field events as the shot put and the hammer throw, Katalinas now travels to Scottish festivals around the Northeast to sign up for traditional Highland Games.

He throws the caber, a heavy piece of wood that can weigh more than 100 pounds. He battles at an elite level in contests that involve tossing heavy stones, iron balls and thick pieces of metal. All of this done in traditional fashion, as he notes cheerfully, which means wearing a kilt.

That was about the only thing that stayed the same for him Saturday morning. The 280-pound Katalinas, 51, kilted all the way, entered an entirely different kind of competition, one that had as much symbolic meaning as any contest he ever attempted in his life.

Katalinas took part in the ninth annual Fight for Air Climb at Buffalo's Main Place Tower, coordinated by the Western New York chapter of the American Lung Association. More than 600 people signed up to climb 24 floors, or 470 stairs. Some did it with preposterously fast times, such as overall men's winner Ed Badida, who made it from bottom to top in two minutes and 37 seconds, or women's winner Erika Frisbie, who cleared the stairs in 3:51.3.

It took Katalinas, an environmental scientist, roughly five times as long as the first guy home, which was fine with him. Speed was hardly the point. As his fiancée and colleague, Sheri Finn, put it, “Running is not his thing,” and Katalinas has nothing to prove. By any measure, he remains a formidable athlete.

Raised in Cheektowaga – like many natives, he refers to his hometown as “Cheektavegas” – he excelled in the shot put and discus in high school at St. Mary's of Lancaster. He added the hammer throw to his repertoire at SUNY Fredonia, before moving on to achieve national success in track and field masters competition. From there, seeking something new, he embraced the Highland games. 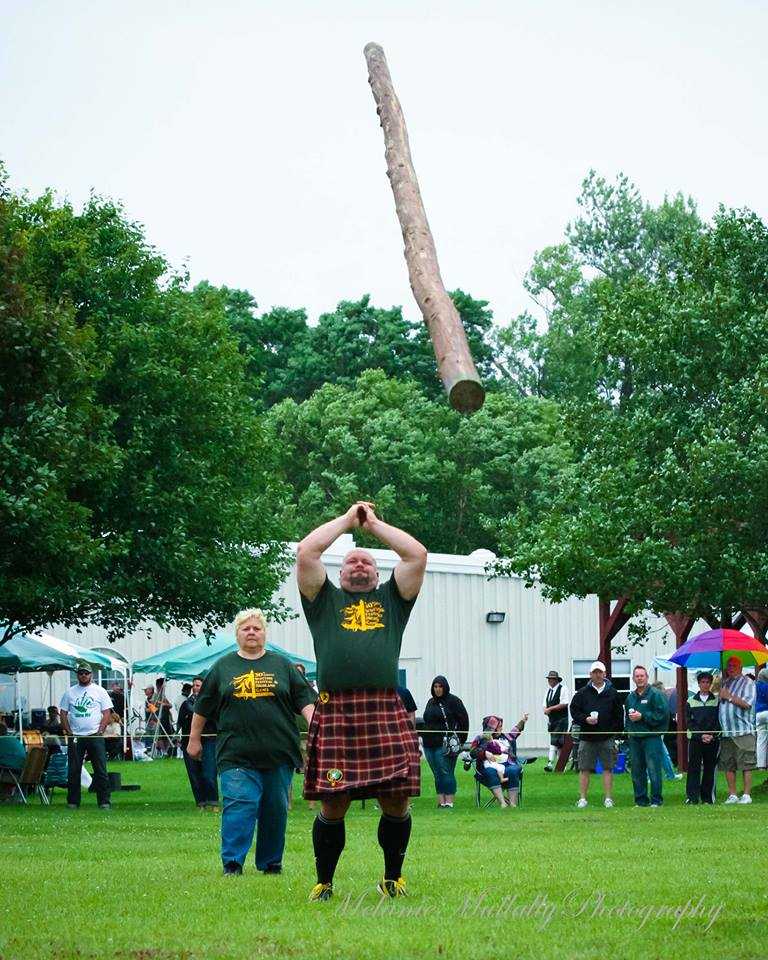 Katalinas loves to laugh, often at his own expense. No, he said, he is hardly a runner. He did one 5k race years ago just for the sake of doing it, and he said he accepted his own limitations when he was passed down the stretch by an elderly woman, who was race walking.

Given his choice, he would rather throw a telephone pole.

The stair climb, all joking aside, was not easy for him. He and Finn did a little clandestine training in the stairwells at the Niagara Falls Memorial Medical Center, but at Main Place, by the 11th or 12th floor, Katalinas reached a point where he was basically willing himself to take each step.

The volunteers at every landing were certainly behind him, as evidenced by Eric Davila, who shouted encouragement and danced in joy as he called out “There you go! There you go!” at the 17th floor. Katalinas gave a grateful nod but felt thoroughly exhausted. He stopped to catch his breath, holding the wall for support.

That kind of pain was the point. This was for his mother.

Katalinas, a leadership board member for the lung association, helped raised more than $2,000 for his team in memory of Dorothy Katalinas, who died from lung cancer in November. Her son, even before his mother's death, knew he would do the stair climb in her memory. Katalinas hated the idea of lung cancer claiming a woman he remembers as unassuming, as fundamentally selfless.

His mom was always at home waiting for him when he was a kid. Her husband, John P. Katalinas, died of complications from a heart attack while their son was still in college. For her family's sake, Dorothy went back to work. She started by disinfecting surgical instruments at St. Joseph's Hospital, before she ended up as an assistant to an anesthesiologist.

“She was very meek, very quiet,” Katalinas said. “If she knew I was doing this, she would have seen it as unnecessary. She would have said, ‘For me? No. Don't bother. Isn’t there someone else?’ ”

Nearly 15 years after 9/11, memories linger for family of hero firefighter

Katalinas said she always shrugged off her own larger importance. His mother was the kind of Buffalonian who worked hard her entire life and built each day around the needs of others, then died with a brief obituary, leaving only those within the most intimate circle to understand the magnitude of that one life.

The climb was a chance for a larger statement. For that reason, the big and bearded bald guy with a kilt – joined by Finn and colleagues Maggie Popek and Jen Wasielewski from the GHD environmental resources company in Niagara Falls – became part of the crowd milling around Saturday at Main Place, waiting to hit the stairs.

Many competitors had similar motivations. More than 100 firefighters from throughout Western New York signed up for the event. Within their ranks, stair climbs in full gear in city towers are increasingly popular, in no small part as a way of honoring the 343 firefighters who died on the job on Sept. 11, 2001, among almost 2,800 people killed when terrorists flew two jetliners into the World Trade Center.

Kaelyn Gates and Kelli Hanson, coordinators of the climb for the lung association, said the event serves as both a tribute to fire personnel and as a potentially lifesaving reminder. Due to what firefighters experience and sometimes breathe in at every fire - all the things that can burn into smoke and fumes within old buildings - they face an unusually high incidence of respiratory disease.

Kristy Ginter of the West Falls Volunteer Fire Co., and Meagan Guido of the Main-Transit Fire Department in Amherst, friends from a firefighting boot camp, did the climb together. Ginter said she was thinking of her stepfather, Joe Hanrahan, an ex-Marine who was a major part of her life, "a fantastic guy" who died in his 50s from lung cancer.

Lt. Ramon Suarez Jr. of the Buffalo Fire Department moved fast on the stairs, despite wearing so much gear. Suarez, who caught his breath afterward with Lt. Kamali Davis, finished second overall among fire personnel with a time of 4:39.8, behind only Buffalo firefighter Marc Brocato. 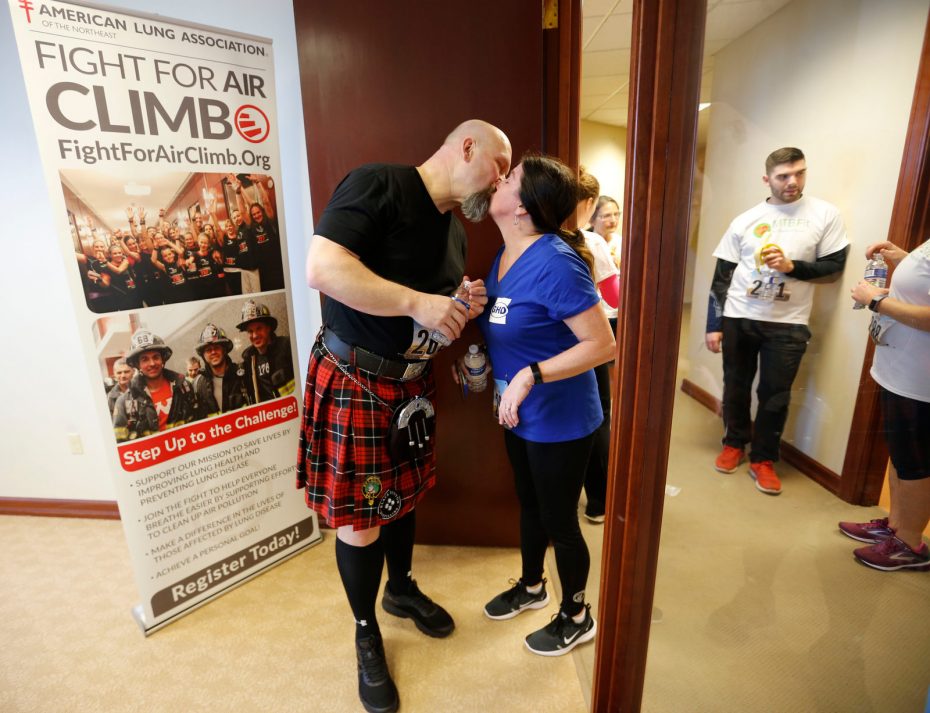 Suarez said he was thinking with appreciation of everything he learned from his grandfather, Bosey L. Johnson, who died from lung disease. “He encouraged me to see the world, to appreciate life,” Suarez said. “He was always supportive of me, of my decisions, no matter what.”

It was Johnson who showed Suarez there was a larger world beyond Buffalo, bringing along his grandson on visits with relatives in Alabama, Kentucky and Georgia. To Suarez, watching someone with that kind of heart go through a hard death with failing lungs seemed utterly unfair.

Churning up the stairs, working through the pain, Suarez thought of him.

As for Katalinas, asked for a favorite childhood memory of his mother, he immediately recalled how much she loved to read. She would sometimes allow him to call in sick from school before driving her son to Sunset Bay, where she would settle in a lawn chair with a favorite book, while Katalinas spent the day in the water or playing in the sand.

On those quiet afternoons, beach almost deserted, it was only them. Katalinas thought of that, and of the lung cancer that claimed her life, and he agreed with Suarez:

Dorothy did not deserve that kind of struggle, and the climb was a chance to dream out loud about a cure.

“What better way to spend a Saturday morning,” he said at Main Place, “than to spend it here, honoring my mother, with 600 of my best neighbors?”

Even on the stairs, he never lost his sense of humor. Katalinas moved along, patient step by patient step. At every landing, he heard the familiar greeting that is a part of life for any bemused veteran of the Highland Games, the way people kept shouting to him about just how much they loved his kilt.

“I should have filled it with helium,” he told them, on his way to the top.