“Where are the goals being lost?”

That is the first question I try to answer as part of any postmortem, and unfortunately for the Buffalo Sabres, their autopsy is right around the corner. Barring a Herculean effort down the stretch, the Sabres will miss the postseason for the eighth consecutive year.

One of the quick ways to isolate on problem areas as it relates to roster construction (primarily a function of the general manager) and deployment (primarily a function of the coaching staff) is to understand how Buffalo’s hierarchy of talent delivered value. It’s important to grade on a curve for each player, too – we shouldn’t have the same expectations for performance for a first-line forward as a fourth-line forward, for example.

With that in mind, I went and pulled out each Buffalo skater’s on-ice goal differential (per-60 minutes of hockey) at 5-on-5. I then compared those numbers to what we would expect to see from your average skater in the same deployment slot. So Jack Eichel – Buffalo’s No. 1 forward at even strength – is being compared to No. 1 forwards for every other team in the league. And we iterate that across every slot on the 23-man roster. 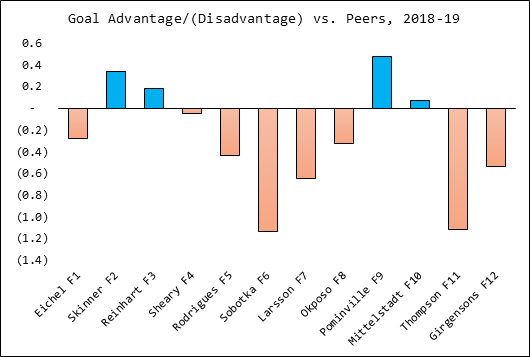 Why did I call Buffalo top heavy for so much of the season, especially within the forward group? This chart summarizes that pretty well. Buffalo’s core four forwards – including Eichel, Jeff Skinner, Sam Reinhart and Conor Sheary – were reasonably competitive with their peers around the league from an on-ice goal differential perspective. (Eichel and Sheary were slight negatives, but that’s more than offset by Skinner and Reinhart beating expectations.)

The problems really come from the rest of the lineup, especially Buffalo’s middle six. Some of those numbers are downright appalling. Vladimir Sobotka was one goal worse (every 60-minutes of play) than the average No. 6 forward on a National Hockey League team. And although his number is the most appalling of the forward groups, it’s not as if Evan Rodrigues, Johan Larsson or Kyle Okposo were much better.

Quite frankly outside of Jason Pominville – whose numbers were, I would argue, a bit skewed having played third wheel on that Skinner/Eichel line during parts of the season – there is nothing to like about the depth of this forward group and it should remain a priority for overhaul on two fronts.

The first, of course, would be Jason Botterill finding talent internally or externally to give head coach Phil Housley more roster flexibility. The second would be Housley executing on that displacement and ensuring that players with limited skill sets are fit into appropriate roles.

Let’s take a look at the defense now, which was a targeted area of improvement for this group heading into the 2018-19 season: 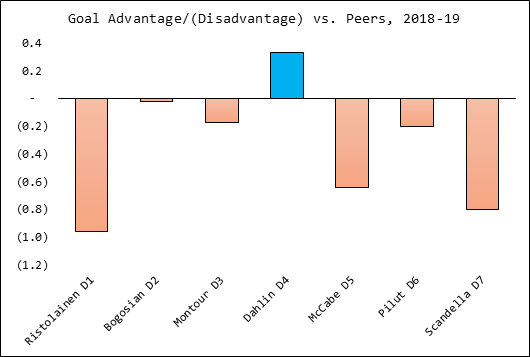 Let’s get Rasmus Dahlin out of the way first. He’s clearly a star and he’s clearly capable of handling more minutes. Dahlin looks fantastic relative to a No. 4 defenseman, but he would compare favorably against No. 1 defensemen, too. Whether the 18-year-old Dahlin is ready for Ryan Suter, Drew Doughty and Seth Jones minutes (as three quick examples) is debatable. What’s less so is the fact that 73 defenders around the league see more even-strength ice time per game. That’s something that has to change heading into 2019-20.

And it’s not as if the Sabres are getting so much more from the rest of the lineup that the moves are defensible. I mentioned names such as Suter, Doughty and Jones earlier – these are the players whom Rasmus Ristolainen is being compared to and, for the umpteenth year in a row, he looks out of his element.

The Ristolainen discussion has been beaten into the ground twice over by this point, but it’s still perplexing how a player with 414 NHL games is seeing this much utilization. At least in prior years the excuse of there not being better options to displace those minutes was in play. Relatively speaking, that’s no longer true.

What may be most concerning is there hasn’t been much of a change in this usage as the season has progressed. Since February, Dahlin is still the team’s fourth-most utilized defender at even strength, and Ristolainen is still number one.

Also, one quick note on Brandon Montour: I showed his performance across both Anaheim and Buffalo because I think he’s going to be integral to this team’s future, especially in 2019-20. Results suggest he’s something of a second-pairing guy, and I think that’s what Buffalo had in mind when they targeted him at the trade deadline. It’s another competent body and at the very least offers Housley and the coaching staff some more flexibility to right-size minutes. (The team has already started doing that with Marco Scandella, who is really going to be fighting for a roster spot going forward.)

On-ice goal differential is just one way to measure the value respective skaters are adding to their team’s position in the standings, and further investigation is required on a case-by-case basis. But if you are of the opinion that this is still a fairly limited roster with too many holes further down the lineup – well, I can’t say I disagree.