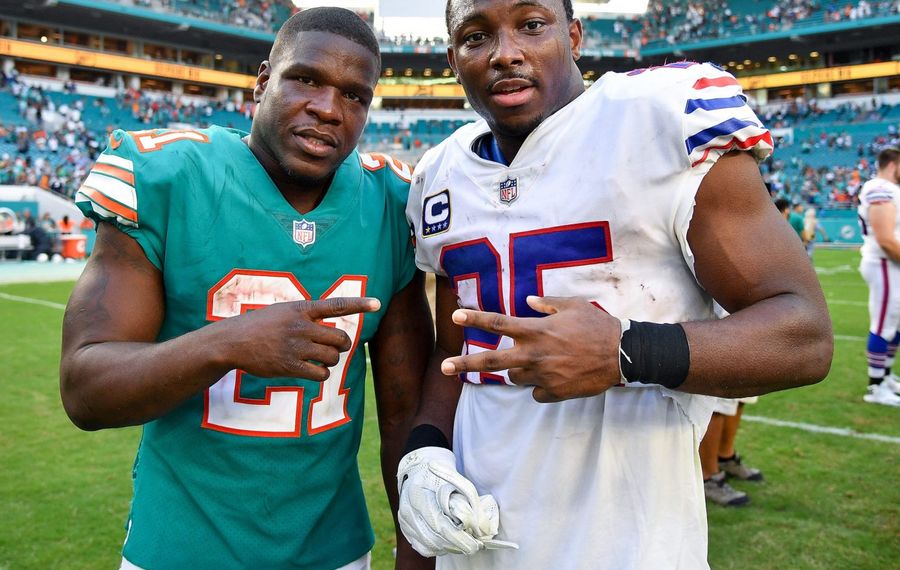 The most curious addition was running back Frank Gore, who will be a shoo-in Hall of Famer but is well past the prime of his career. Gore is a good guy and a good friend of LeSean McCoy, but his addition gives the Bills a dubious honor likely never held before in NFL history: The three oldest runnings backs under contract across the league are all on the Bills' roster.

Gore, who turns 36 in May, becomes the oldest player on the team – a title Lorenzo Alexander was more than happy to give up. Chris Ivory turns 31 next week and McCoy turns 31 in July. The only other running backs in the league older than McCoy and Ivory last season were Adrian Peterson (33) and LeGarrette Blount (32), though both are free agents.

But while the rest of the league is trending toward younger, cheaper running backs who seem be somewhat interchangeable, the Bills are on the complete opposite end of the spectrum – to a degree likely never seen before in NFL history.

Could Buffalo get a Frank Gore twofer?: Frank Gore Jr. is a high school football recruit reportedly considering playing for UB. Now that would be something ... although Gore Sr.'s contract with the Bills is a one-year deal and Gore Jr. is entering his senior year of high school.

Bills set to fill big hole at center with signing of Mitch Morse: The Bills addressed a major need by bringing in former Chiefs center Mitch Morse on a reported four-year, $44.5 million deal that gives him the highest average value for a center in history (at least until fellow free agent Matt Paradis signs). Morse has earned strong grades in pass protection from Pro Football Focus but scores lower in run blocking. He earned a 69.5 season grade (including playoffs) in 2018, which ranked 14th in the NFL.

Bills add depth, competition at cornerback by signing Kevin Johnson: The Bills added CB Kevin Johnson, who was the 15th overall pick out of Wake Forest in 2015. Players like that don't hit the open market without some concerns, though. Johnson has started only eight games since his rookie season due to knee and foot injuries as well as concussions. He played only one game last season after suffering a concussion in Week 1 just days after being cleared from a preseason concussion. But if Johnson can stay healthy, he should compete with Levi Wallace for the starting corner job opposite Tre'Davious White. And if nothing else, he gives the team much-needed depth at the position, protecting against an injury to White, which would be catastrophic without a potential starter like Johnson around.

Bills to sign TE Tyler Kroft to three-year deal: The Bills added to another position of need by agreeing to terms with Tyler Kroft. Fantasy football players may know Kroft as the guy on the Bengals to pick up when Tyler Eifert gets injured again, but Kroft has been mostly a run-blocking tight end throughout his career. Kroft is the second tight end on the roster, joining Jason Croom; the position is still an area of need for the Bills, and one they very well may address though the draft.

Speaking of Croom: Charles Clay's release is "pushing me even harder," Croom says.

Mailbag: How important is it to sign a player during their free-agent visit? Which wide receivers should the Bills target? Jay Skurski tackles those questions and more in the Bills Mailbag.

Bills’ free-agent shopping list: This came out earlier on Monday, but Vic Carucci said LB and CB might be the best of what remaining positions offer on the free-agent market.

As LeSean McCoy closes in on 10,000, he's setting his sights even higher