The story goes like this: Zandra Cunningham was obsessed with lip balm. When her dad stopped bankrolling her habit, the 9-year-old had to learn to make her own.

Nine years later, that's turned into a $500,000 skin care company with products sold nationwide in such stores as Costco and Target.

There is more to the story, of course, but maybe not what you think.

Cynics assume the 18-year-old entrepreneur is a figurehead, a marketing gimmick dreamed up by two enterprising parents looking to get into the skin care business.

But that couldn't be further from the truth, Cunningham said.

She did have a lot of help from her parents, especially her mother, Tamara Lewis-Cunningham, who managed a chiropractic office before joining her daughter's business full time.

But Zandra put the work in, too. That meant going to school, playing sports and doing homework, then going to her lab, mixing and packaging batches of product, traveling to speaking engagements on weekends and helping take care of the thousands of other little details that come with running a business.

"We earned it together. We didn't know anything about formulations or ordering raw materials," Cunningham said. "She took the lead, taking me where there were no kids allowed and bringing me around business owners so I could see that life up close." 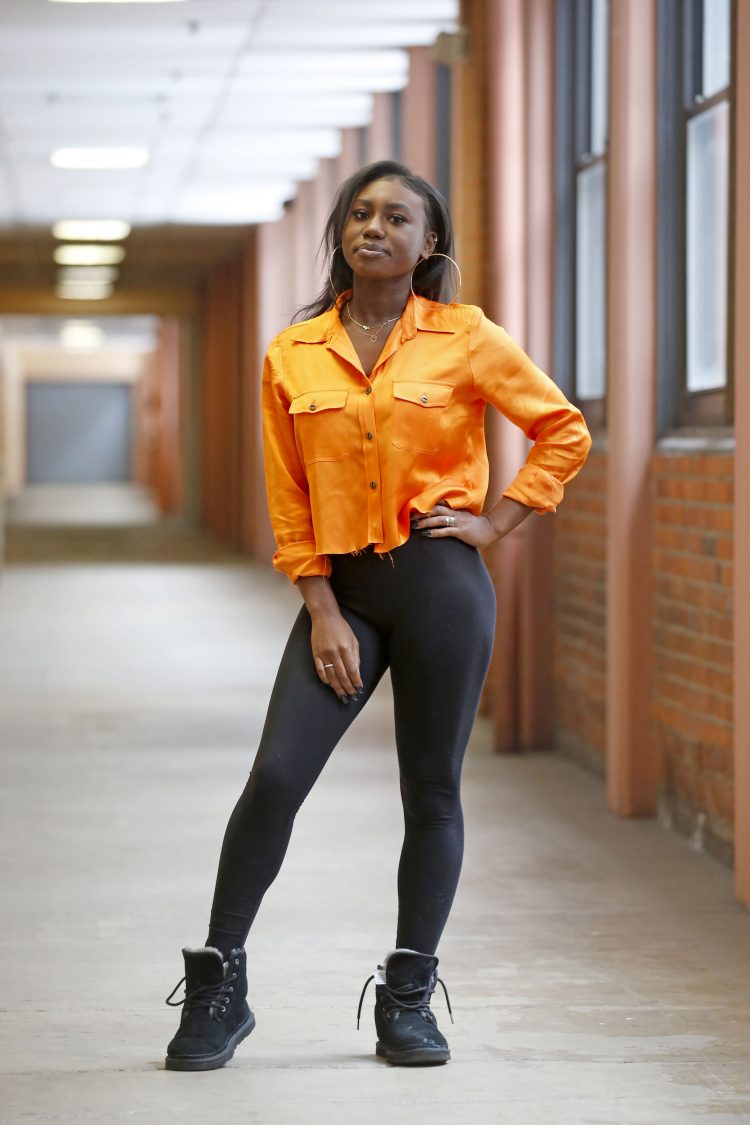 Zandra Cunningham has been making her own plant-based beauty products since she was 9. Now at 18, she sells her products nationally. (Robert Kirkham/Buffalo News)

Her dad, who gave her seed money, just recently came on board as chief financial officer.

Now, Zandra is a skin care executive, an international speaker and author, and uses her career as a platform for girl empowerment.

It started with a mail-order kit and continued when her mom helped research and perfect different skin care recipes using food ingredients they had at home.

Together they made lip balm and lotions for themselves, which Zandra started sharing at church. Soon, she was selling them at farmers markets and craft shows, and had a serious operation that outgrew their kitchen and moved into an incubator space at the Foundry.

Today they have a 5,000-square-foot space in the Pierce Arrow Commerce Park on Great Arrow Avenue. The manufacturing facility has a showroom and a separate space to host parties, makers' workshops and science-based beauty classes for kids and teens.

After selling products at Renew Bath and Body on Elmwood Avenue, Zandra Beauty's first big break came in 2016 with Etsy.com's Open Call contest. That put Zandra and about 35 other entrepreneurs in front of buyers from major companies like Macy's, HGTV and Whole Foods Market. Zandra Beauty ended up winning a contract with craft and stationery chain Paper Source to put products in its 110 stores that holiday season.

"We had everybody in here helping us. Felt like the whole city of Buffalo. Our church, the community. People were staying until 3 a.m.," she said. "It was one for the books."

The products caught the eye of "Good Morning America," and the show featured Cunningham and her company on its "Deals and Steals" segment. Online sales took off, and major companies took notice. Costco, Wegmans and Whole Foods placed orders.

Most recently, the company was approached by Target and put together a limited-release gift box for Black History Month. The inventory needed to stock the 707 stores across the country was more than double what the company had ever produced.

Cunningham's father, James, once a vice president at a collections agency and thus an expert at tracking people down, used his detective skills to find contact information for buyers at more major corporations. Zandra Beauty was able to garner interest from Zulily, Rite Aid and Walgreens, but had to put some things on hold in order to catch up after the Target deal.

Having your dad as an employee can lead to some interesting situations – Zandra calls him by his first name, for example – but they make it work.

"When it comes down to business, I don't pull parental rank. I'll present all the information to her in a convincing way and let her make a decision," he said. "If there's a conflict, she wins."

Dad is a recent addition to the staff. Zandra credits her mother, Tamara Lewis-Cunningham, with planting and watering the seeds that grew into the Zandra Beauty business.

Her mom's philosophy has been to steer her children according to their passions and let them try everything. Rather than wait until college, her mom's motto has always been, "We're gonna find your thing now," Cunningham said.

"My siblings and I know you have to be careful what you say around my mom. If you say you're interested in something, she'll have you in a class by Monday," Cunningham said. "She does not play in regards to making things happen."

That parenting style has resulted in one clothing designer sister, one young jewelry designer and author brother, and two athlete brothers.

The youngest person ever to graduate from the University at Buffalo School of Management's Allstate Minority and Women Emerging Entrepreneurs program at age 13, Cunningham started at UB in the fall, working toward a business degree.

Though she likely knows enough to teach some of the classes she's taking, and though she rolled her eyes when talking about last semester's English class requirements, she said a college degree is important to her and her family. She has also found a helpful mentor and learned some important things in her major so far.

Despite starting college (she formerly attended Nardin Academy and was later home-schooled), Cunningham has no intentions of slowing down. In 2017, she won $15,000 for her business plan from The Pitch, a spinoff from the state's 43North startup competition.

Next up, she'll be branching out into cosmetics and hair care (all made in Buffalo with all-natural ingredients sourced in the United States). She will be collaborating with her sister on a clothing line and plans to push harder into traveling to speak on female empowerment, education and entrepreneurship.

Maybe, just maybe, she will be willing to sell her company in the future, but only if the buyer keeps it a black-owned business. More likely, she will hang onto it herself.

"Honestly, I want to see this company through," she said. "I want to build my empire 15 stories high." 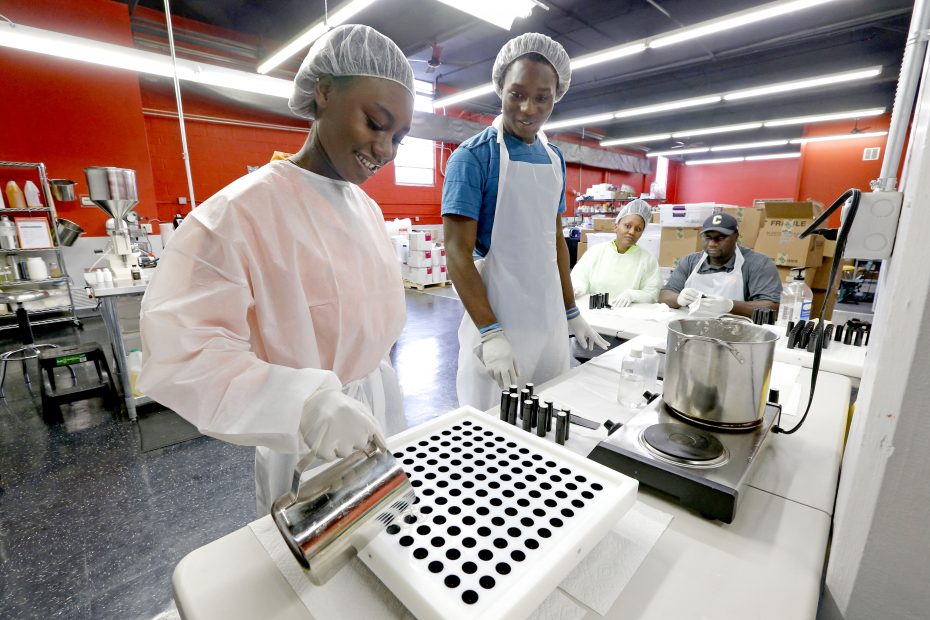 With her brother, Josiah, right, waiting for the next step of production, Zandra pours the melted lip balm formula, while her mother, Tamara, and father, James, watch. (Robert Kirkham/Buffalo News)

She’s 14 and has her own business