Jay Kuzara suffered a back injury in 2004 while installing a windshield in a Virginia collision shop, and credits prescription opioid painkillers for allowing him to raise his three kids instead of spending his days in bed.

It helps explain why he panicked last week when his pain management doctor told him that New York State planned to force prescription opioid users to wean off their medications within three months.

This isn’t true for patients like Kuzara, who for years have used opioid medications to control chronic pain. It’s more a reflection of the fear, stigma and uncertainty they face in the wake of a national epidemic caused by thousands of overdose deaths.

“I have a ton of concern about the future,” said Kuzara, 49, of West Seneca, who admitted he has come to depend on his drugs. “They work. I take my medication as prescribed. I’ve never once called my doctor to say, ‘Oops, my entirely fresh bottle of morphine fell in the toilet. I need more.’ ”

Doctors across the country who have successfully treated similar patients the same way, and now find the treatment option under siege, are speaking out as federal and state agencies continue to reshape prescription guidelines. They want policymakers to remember “legacy patients,” as well as new patients that physicians deem appropriate for opioid treatment of chronic, debilitating pain.

“One of the things we have to keep in mind about the prescription drug crisis is that part of it was borne from the fact that there are many people who suffer,” said Dr. Paul Updike, director of Addiction Medicine and Recovery Services with Catholic Health. “We were way too aggressive with prescribing and not cognizant enough of the risks – but suffering and pain didn’t go away” with more recent regulation.

Life began to change for patients like Kuzara after the federal Centers for Disease Control and Prevention in 2016 – reacting to rising opiate-related overdoses – issued prescription medication guidelines for adults with noncancer pain. The guidelines encouraged several strategies to avoid starting new patients on prescription opioid painkillers and, if called for, to limit daily doses.

Last month, the state Department of Health reminded health providers in a letter about a new state rule, passed last year, that requires a written treatment plan with a risk-benefit analysis of opioid treatment for any patient who has been on narcotic painkillers for more than three months, except those in end-of-life care or who have cancer that is not in remission. Doctors also must tell the state that they have discussed alternative treatment options with patients.

During his recent visit, Kuzara was unsettled by the way his pain management office interpreted the letter. He said providers already cut his daily opioid dosage in half in 2017, after the CDC guidelines came out. He had been taking 180 milligrams for nearly a decade, after he moved back from Virginia and got lower spine fusion surgery in 2006 to curb the pain from his slip and fall two years earlier.

“This is keeping me up,” said Kuzara. “It’s unethical.”

Are there better ways to treat chronic pain?

Kuzara worked as a morning producer for the Larry “Snortin’ ” Norton 97 Rock morning radio show in the 1990s after he graduated from West Seneca East High School. Telemarketing, mechanic and website management jobs – along with regular gigs as a drummer with bands that included Black Widow, Hit-N-Run and Breakaway – were part of most of his adult life before and after his back injury, even for a time after his wife, Patricia, a nonsmoker, died in 2013 from lung cancer.

He became more reclusive two years ago, when his doctor lowered his doses of morphine and hydrocodone. He once took five medications and now takes a dozen, including prescription strength acetaminophen and ibuprofen, a muscle relaxant, an anti-seizure drug and two antidepressants.

“I don’t remember signing up to be a lab rat,” he said.

His six drum sets have gathered dust in his basement since the changes in medication. He rarely drives his 2014 Dodge Ram. He spends most of his days playing video games and watching TV. 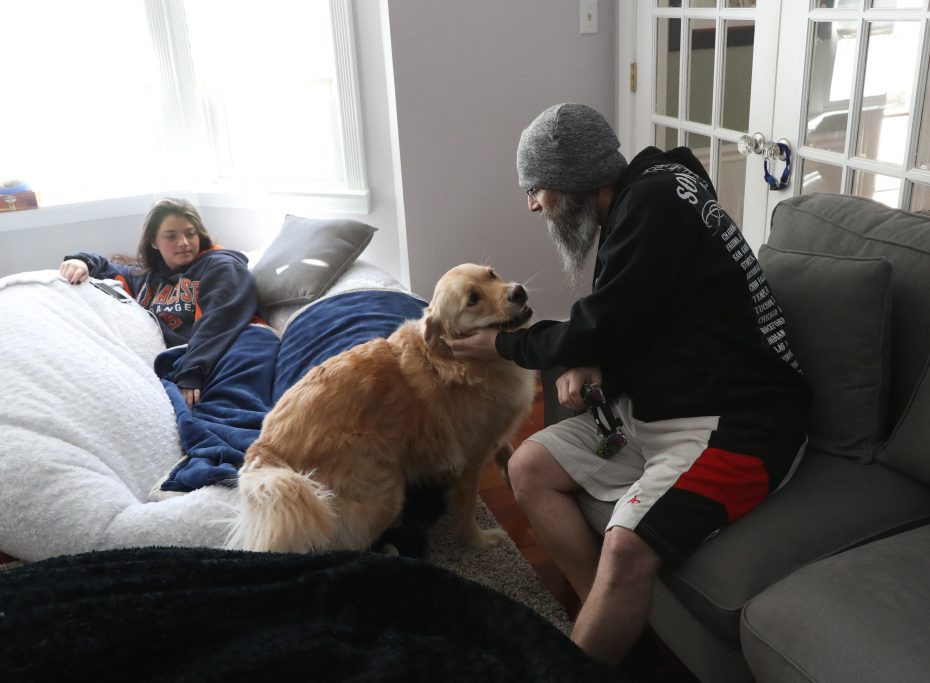 Jay Kuzara rarely leaves his house and spends a lot of time playing video games. He also often hangs out with his his daughters, including Kayla, 18, and the year-old family dog KC, named for Kuzara's favorite childhood baseball team. (Sharon Cantillon/Buffalo News)

Kuzara hardly struggles alone. Leading doctors say legacy patients are in the minority of those treated with opioids for pain – but have been hit hard by regulatory change.

“What started out as a legitimately important attempt to get our hands around the proper use of opioids for treating pain turned into something where we’re running into issues now with people inappropriately applying guidelines,” said Dr. Thomas J. Madejski, a Western New York primary care and palliative physician, as well as president of the Medical Society of the State of New York.

The arrest in recent years of three doctors in the region accused of haphazardly writing prescriptions, and the conviction so far of two of them, also stirred fears among doctors, including many who decided to no longer prescribe opioids, Updike said.

Meanwhile, said Madejski, some pharmacies and insurance carriers began using the CDC recommendations to shape prescription guidelines, and declined to fill or pay for prescriptions for some patients. 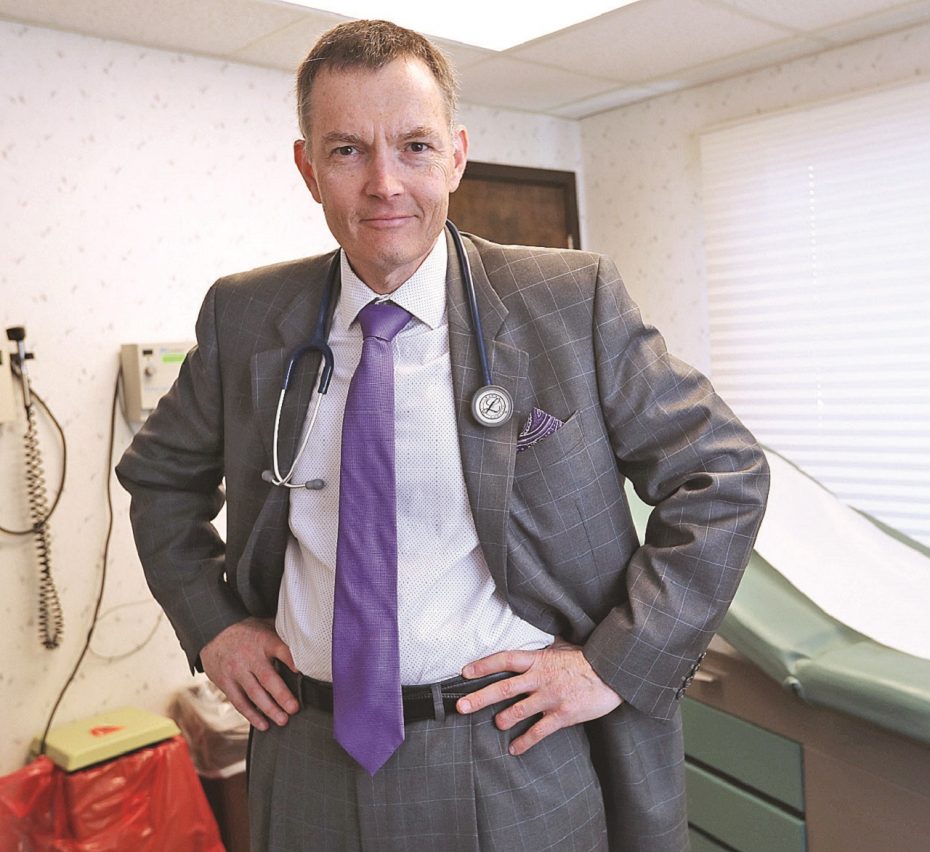 “What started out as a legitimately important attempt to get our hands around the proper use of opioids for treating pain turned into something where we’re running into issues now with people inappropriately applying guidelines,” said Dr. Thomas J. Madejski, a Western New York primary care and palliative physician, as well as president of the Medical Society of the State of New York. (Sharon Cantillon/Buffalo News)

The medical society president said he has heard from several doctors across the state, including one of his partners, who have had challenges with Walmart pharmacies that would not fill prescriptions, leaving chronic pain patients – particularly those who don’t drive, live in rural areas and have limited access to other options – in the lurch.

“They’re not rules. They’re not laws,” said Burstein, who leads the county Opioid Epidemic Task Force. “Providers may have to modify the recommendations, or their practice, on specific patients – based on a specific patient’s situation.”

Opioid restrictions have tightened as the CDC and Food and Drug Administration seek more input, and clarity, on how to best recommend updated pain management protocols.

FDA Commissioner Scott Gottlieb said last year that new evidence-based guidelines are needed. He also underlined that the evidence already is clear that too many doctors in recent years provided too many pills for too much common pain. This, he said, diverted excess pills to family members, acquaintances and drug dealers, raising addiction and illegal drug use.

Existing recommendations were made for those starting opioid medications, Updike said, and legacy patients tend to be older and far less likely to become addicted.

“Most practitioners try to get them to the minimum dosage that works, but for some we’re not able to get them off the medicine,” said Updike, the Catholic Health physician. “They function less well.” 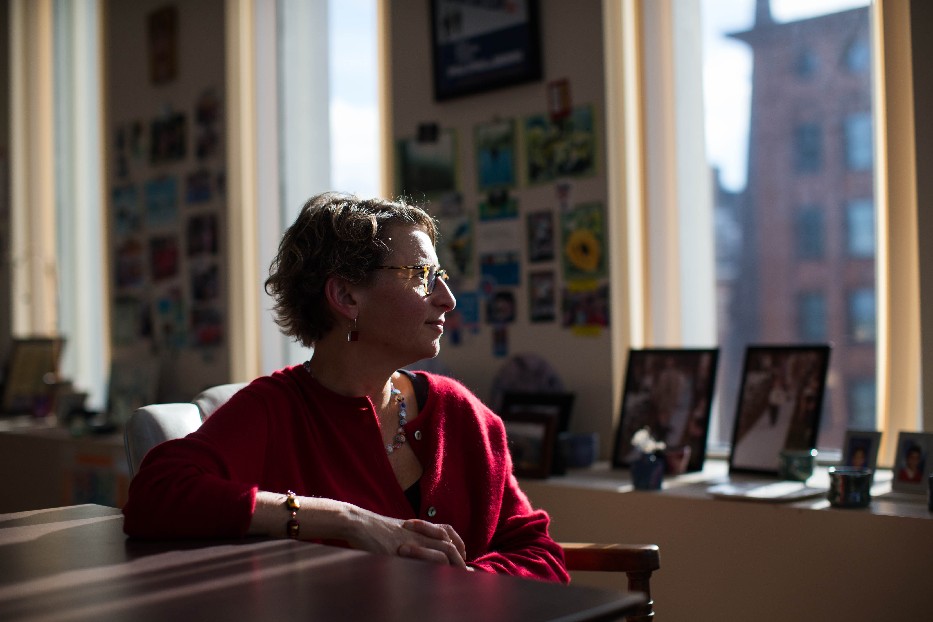 Alternative treatments get a closer look

Last November, the American Medical Association passed several resolutions expressing concern about the CDC guidelines, including one in support for the use of opioids at greater dosages than 90 milligrams a day in some patients with acute or chronic pain. Another resolution cited “the misapplication of the CDC guideline by pharmacists, health insurers, pharmacy benefit managers, legislatures, and governmental and private regulatory bodies in ways that prevent or limit access to opioid analgesia,” according to an article published last month in the online medical journal Medscape, under the headline, “The Pendulum Has Swung Too Far.”

A federal advisory panel is close to finalizing recommendations for new guidelines. Meanwhile, the opioid crisis has forced the American medical community to take a closer look at alternative treatments. They include physical therapy, exercise and mental health counseling.

Research about the risks and benefits of many of these forms of treatment is relatively scant, and in some cases contradictory, and some are accessible only at full cost or with high copays – making them inaccessible for many patients who, like Kuzara, struggle financially.

Opioid painkillers also continue to be largely understudied and misunderstood, Updike said. He often asks at public speaking events: "What percentage of prescription opioid users become addicted to their medications?" Most guess the number stands at or near 100 percent.

Studies vary from 1.5 percent (an early Big Pharma estimate long ago debunked) to about 40 percent. Updike and Madejski estimated the number at about 15 to 20 percent. 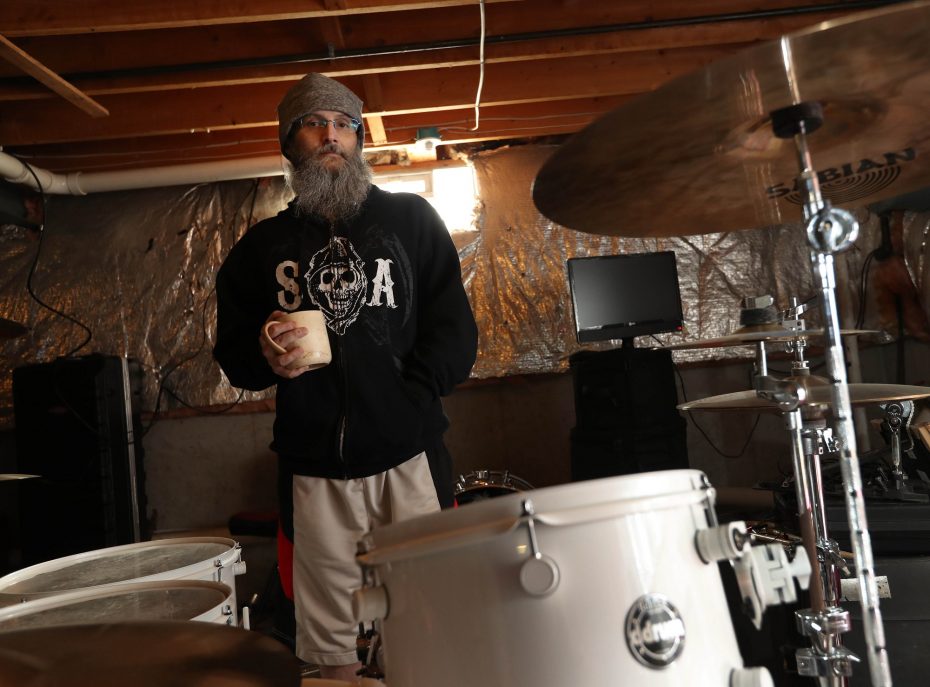 Jay Kuzara has had his prescription opioid medication cut in half since the federal Centers for Disease Control recommended new guidelines in 2016. (Sharon Cantillon/Buffalo News)

Risk factors are very straightforward but many physicians don’t realize it, said Updike, considered by Burstein as the top medical authority on the county opioid task force. Both doctors said risks include:

• A family or personal history of addiction, not only of illicit drugs but also alcohol, gambling and pornography.

• A mental health history, particularly one that involves traumatic events including physical or sexual abuse.

• Even just one emergency room visit for an overdose.

• Age. “Addiction is the disease of the young,” Updike said. 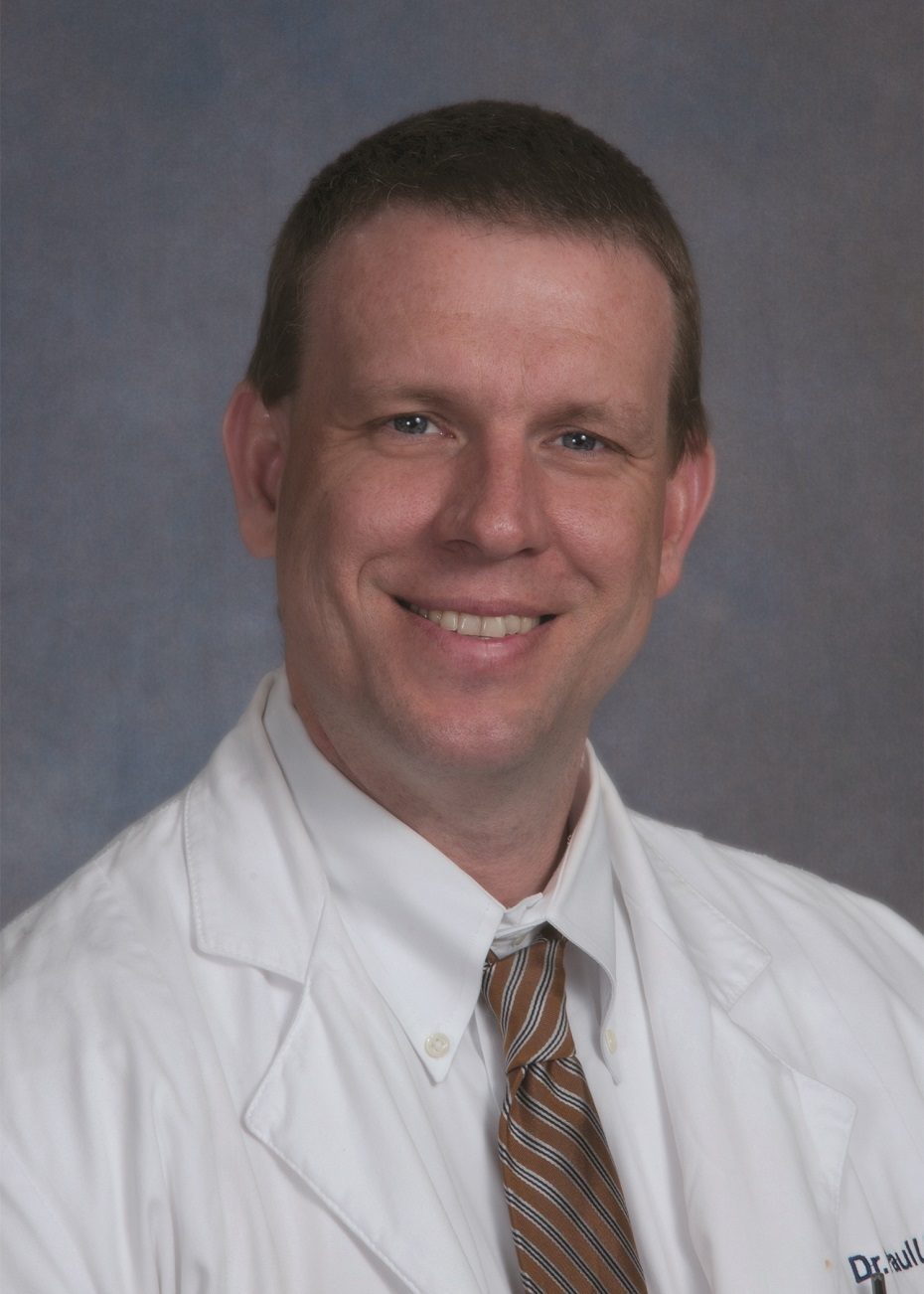 Dr. Paul Updike, director of Addiction Medicine and Recovery Services with Catholic Health, says the use of opioid prescription painkillers has a place in pain care but needs to be monitored carefully.

Amid the crisis and medical complexity, Updike said, it’s easier for doctors to try to change or abandon legacy patients, pharmacists to thwart prescriptions and politicians to promise simple solutions to a fearful public.

Yet Updike said legacy patients have not posed a problem in the pain management part of his practice.

“We did proper patient selection, then followed them so closely, and the benefits appeared to outweigh any of the downsides,” he said. “It’s unlikely you’re going to develop out-of-control addiction behavior out of the blue when you’re 70 years old. We don’t do a good job of parsing that out. We put everybody into one big category and this is where the troubles start to arise.”

He talked about treating grandparents who take opioid medications as prescribed, and regularly care for their grandchildren.

This is why three of the leading doctors in the region expect – and hope – that despite the opioid crisis, updated CDC guidelines will leave no patient behind when it comes to the best, most measured, individualized care.

“My guess is they’re going to be a little bit more open to revising treatment, or at least emphasizing that more,” Madejski said. “I don’t think they did that terribly in the first set, but when people were looking for something to latch onto, they viewed this as a decree from on high. There’s still enough lack of knowledge, or incomplete knowledge, and getting back to treating the individual patient is the most important thing.”