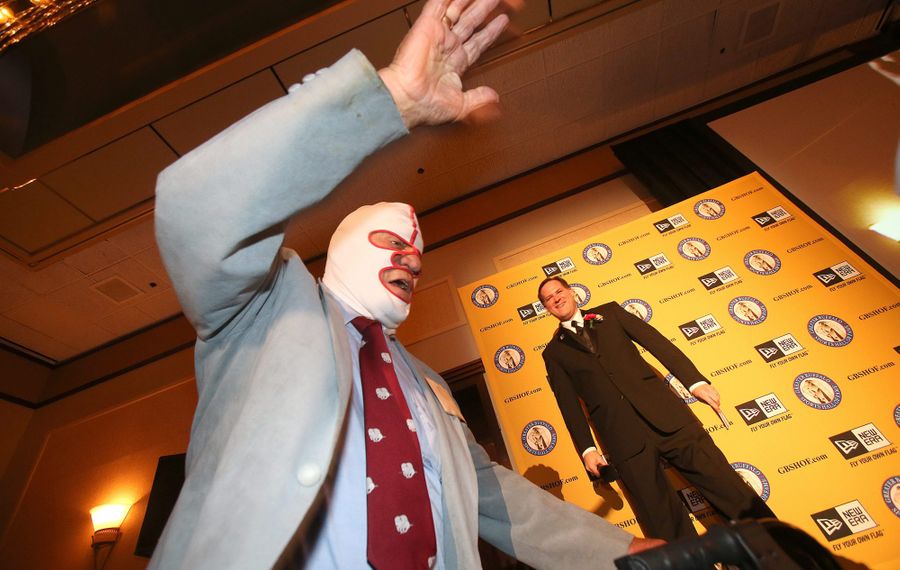 Dick “The Destroyer” Beyer, a Buffalo native regarded by many as the greatest masked professional wrestler of all time, and Ilio DiPaolo were close friends ever since they first met in the early 1960s.

Their relationship is chronicled in photographs and clippings on the walls of the late DiPaolo’s famous Blasdell restaurant, and ingrained in the memories of both families.

“He was like a second father to me,” Dennis DiPaolo said Thursday, heralding Beyer’s charitable work and dedication to the Ilio DiPaolo Scholarship Fund, which annually awards five grants to the top high school wrestlers in Western New York. One of those is “The Destroyer Award,” given to the “baddest” wrestler of the bunch.

“These kids that have all won his award, they all are given a mask,” DiPaolo said, “and we give them a check, and we give them a plaque and a trophy and a certificate and everything, and that’s all great. But the kids love the mask.

“He puts it on them and he goes, ‘Now you’re as good looking as I am!’” DiPaolo growled. “And even when he was using the walker and it was hard to get around, he still got up on stage to make sure he gave that award out. That’s the kind of individual and man he was.”

Beyer, a four-time world champion, died peacefully in his bed on Thursday afternoon at his home in Akron, surrounded by his wife and all of his children, his son Kurt Beyer confirmed. He was 88.

Beyer's career spanned nearly 40 years and included nearly 8,000 matches in the United States and Japan, where he rose to superstardom.

Beyer, who famously fashioned his first mask out of a woman's girdle, wrestled under his given name and without a mask when he began in 1954. But he gained worldwide fame when "The Destroyer" was born in 1962. He also worked as "Doctor X" in the Minnesota-based American Wrestling Association from 1996 to 1972 and won the AWA world championship. He also wrestled for All Japan, becoming the first American wrestler to sign with a Japanese company, and the American Wrestling Alliance, among other promotions.

“He was ‘The Destroyer.’ He was ‘Doctor X’ for a while. For most of the people in and around Western New York, they knew him as ‘Coach,’ because he coached at Akron Central for so long, and at Amherst," Kurt Beyer said. "So he’s worn a lot of hats. But he’s always been ‘Dad’ to us.”

“I wanted people to hear it from me,” Kurt said, after posting the news of his father's death on Facebook earlier in the day. “And that just spread like wildfire. I’ve been getting calls from Japan, the West Coast, Ric Flair called today, family, friends, there’s a lot of people involved. … Classmates, industry people, different people from his coaching career, from his wrestling career, from different cities, so it’s been a barrage.

"And I would have been shocked and saddened if it hadn’t happened that way, given the way my dad lived his life, so I’m happy that there was that many people that are concerned and care enough to call us, to reach out. It's been a blessing."

The WWE issued a statement expressing sadness about the death of the "masked wrestling pioneer" and noting that "Beyer thrilled fans and terrified opponents for three decades."

“Dick Beyer was a landmark villain in Japan, where he once garnered 70 million viewers for his legendary match against the late Rikidozan,” wrestling analyst Mike Johnson, who writes for pwinsider.com, wrote in an email to The Buffalo News. “Compare that viewership to a show like ‘This is Us’ on NBC now, which does a little over 10 million on a good week. He was an insanely important personality in Japan at the time and was the measuring stick for an American's success in that country.”

Last year, the Japanese government presented Beyer with the Order of the Rising Sun under the Gold and Silver Rays class, which is the second-highest level. The honor was bestowed for a lifetime spent promoting goodwill and bi-cultural exchanges between Japan and the United States.

Karl Lauer, who served as benevolent chairman, executive vice president and CEO of the non-profit and fraternal Cauliflower Alley Club for 35 years, recalled Beyer’s famous match with Gorgeous George at the Olympic Auditorium in Los Angeles in 1962.

“There were 10,400 people there. Either The Destroyer would have his mask removed or George would have his head shaved,” Lauer said. “Beyer won that match. It was almost a riot. The people didn’t want to see Gorgeous George lose his famous hair.  It made news over the world. It really put Dick over as the No. 1 bad guy in wrestling.”

Lauer called Beyer “one of the greatest storytellers in the world.”

“He’s famous for wrestling a dead alligator,” Lauer said. “The arena was sold out and they brought this alligator out. It had been frozen the night before. He literally did a wrestling match, but nobody knew the alligator was dead. The fans thought the Destroyer killed the alligator. To hear him tell it, it was hilarious. He also is the only guy to beat Victor the Bear, the 500-pound bear. He beat up the bear.”

Beyer even released a Christmas album in Japan in the 1970s - "The Destroyer's Christmas."

“I was asked to wear a mask in 1962 and I said, ‘You have to be out of your mind,'" Beyer told The News in 1977. "In four weeks, it doubled my income. About 16 months later, I was told I could take it off and I said, ‘not tonight.’ This man here, ‘The Destroyer’ is very, very popular. I am instant identity. I’ve got through customs about 30 times and I’ve only been asked twice to show my face.”

After Beyer retired from his wrestling career, he became the wrestling coach at Amherst High School, where he met his second wife, Wilma, a school nurse.

Beyer later became a fixture in Akron as a high school swimming coach, an assistant football coach and for making charitable donations and fundraising for local youth sports.

“Everybody automatically associates him with wrestling," said Ken Stoldt, who served as the athletics director at Akron in the 1990s, "but when I was the AD there he was my swim coach. And I think that was Dick’s biggest accomplishment at Akron, was what he did with the swim program. He was very well-liked, and the guy genuinely cared about his kids. That’s one thing that immediately comes to mind with me, is that through our conversations through the years, he always had the kids’ best interest at heart.”

Joe Lucenti, the principal at Akron, said there were several occasions when Beyer took the school's swimming team to Japan.

“Everyone knows his athletic history and things of that nature,” Lucenti said, “but as a principal, what I’m most appreciative of is what he taught our kids about life, particularly about other people, about tolerance, about charity, about really giving to others."

Beyer was an Eagle Scout and successful athlete at a young age, a four-sport star at Seneca Vocational who earned a football scholarship to Syracuse University, where he played guard and co-captained the Orange Bowl team in 1952 and also was a three-time letterwinner as a wrestler. He remained at the school as an assistant coach, winning a national championship in 1959 with the team headlined by running back Ernie Davis.

"We are all saddened by the news of Dick’s passing," Greater Buffalo Sports Hall of Fame President Tom Koller said. "For so many, Dick will be remembered as The Destroyer. But we should not forget his incredible athletic accomplishments... Dick  was a great friend of the Greater Buffalo Sports Hall of Fame and to the countless others who came to know and enjoy him. Our thoughts and prayers go out to his family. His energy, smile and passion for wrestling and life itself will truly be missed."