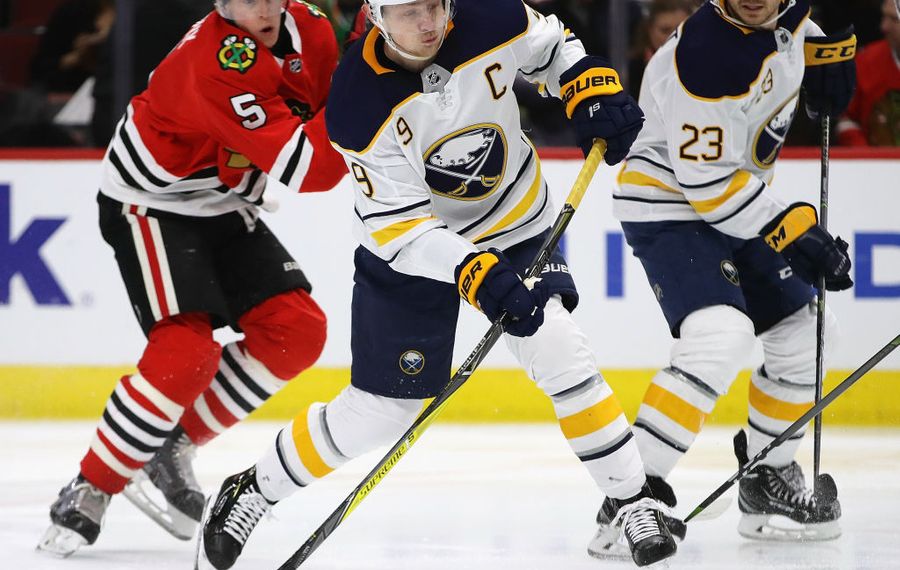 CHICAGO -- No matter what they do, the Buffalo Sabres can't find a way to win in "The Madhouse on Madison."

The United Center no longer houses a Stanley Cup champion and probably won't even host a playoff game for the second straight year but the Chicago Blackhawks own the Sabres here.

The Sabres lost their ninth in a row here (0-6-3) and continue to be winless since Jan. 10, 2007, their longest drought in any NHL arena. It was the third straight year Buffalo has lost in the building past regulation.

It was a wild third period that started with the Sabres holding a 3-2 lead. Chicago's Artem Anisimov scored his second goal of the game at 4:48 to get the Blackhawks even but Kyle Okposo converted an Evan Rodrigues pass on a 2-on-1 break at 7:20 to put the Sabres ahead again, 4-3.

Back came the Blackhawks on Brendan Perlini's goal 37 seconds later to forge the third tie of the night. That set the stage for the dramatic finish, which included a wild overtime that saw Chicago outshoot the Sabres, 7-5. The final count was 45-39 for the Blackhawks.

Quick strikes: The Blackhawks led, 2-0, after the first period but the Sabres wiped out that deficit early in the second. It started at 3:16 with a tap-in by Sobotka and Buffalo got even at 4:39 on Montour's snapshot in the slot after a long headman pass by Bogosian and a quick tap from Scott Wilson.

PK Power: The Sabres held down Chicago's power play, which was sixth in the league at home, in six chances. And it got a goal of its own as Bogosian worked the puck down low around goaltender Corey Crawford, initially looked like he was in too deep and then reached back from below the goal line to tuck the puck home inside the post.

Bogosian scores shorthanded and puts the #sabres up 3-2! #blackhawks pic.twitter.com/ncN2Kz9DZY

Slice of history: Bogosian's short-handed goal was the first of his NHL career. Combined with Jake McCabe's shortie Jan. 8 vs. New Jersey, the Sabres defensemen have two short-handed goals in a season for the first time since 2005-06 (Henrik Tallinder and Jay McKee).

Breaking on top: Chicago took a 1-0 lead as Duncan Keith beat Bogosian to the puck and blooped home a rebound at 16:01 of the first period. The Hawks quickly made it 2-0 as Anisimov deked Hutton silly on a breakaway at 18:26 after a turnover in the Chicago zone by Casey Mittelstadt sent the puck going the other way. Kane assisted on both goals.

great passing from the #blackhawks leads to another goal 2-0. Anisimov. #sabres pic.twitter.com/aMjjrFzZqJ

Kane on the Hawks' all-time list: The two-point night pushed Kane's career total to 924 points, moving him past Steve Larmer (923) into fourth place on Chicago's all-time list. He's behind only three legends who have had their numbers returned -- the late Stan Mikita (1,396 points), Bobby Hull (1,036) and Denis Savard (881).

Not taking advantage: The Blackhawks entered the game with a minus-19 goal differential in the first period this season and their 90 goals against were the most in the NHL. But the Sabres could not beat Crawford even though they had an 11-4 advantage in shots on goal over the first half of the period. The count ended 16-14 for Chicago.

Up Next: The Sabres were scheduled to fly to Denver immediately after the game and will practice there Friday afternoon. They meet the Colorado Avalanche Saturday afternoon at 3 in Pepsi Center. The next homee game is Tuesday night against Dallas.