Look at the statistics, and this winter has the makings of one of Buffalo’s harshest.

The first snow came in October. Nearly 60 inches fell in January, with help from a blizzard. We've already exceeded 100 inches, and are 32 inches higher than normal. Then add ice storms and a windstorm that thrust Lake Erie ice chunks onto shoreline porches.

So why doesn't this winter seem so bad?

It’s because the snow never stuck around too long.

"Are we over 100 inches? Sure. But generally, it's melted off," said Aaron Reynolds, meteorologist at the National Weather Service. "We've had worse winters."

A Buffalo News analysis of National Weather Service data shows just how different this winter has been compared with others for snow cover. Eleven times so far this winter the snowpack has completely melted to reveal our lawns. That's more than any other winter season this decade.

On average, we had to wait just five days for the snowmelts, The News analysis showed. Last winter, we waited an average of 12 days between snowmelts, and there were only five snowmelts last winter.

So for those like Diane Wilk of Depew, the Buffalo Niagara region's winter of 2018-19 has seemed manageable.

“In the sense of Buffalo, it’s not been a bad winter for snow,” Wilk said. 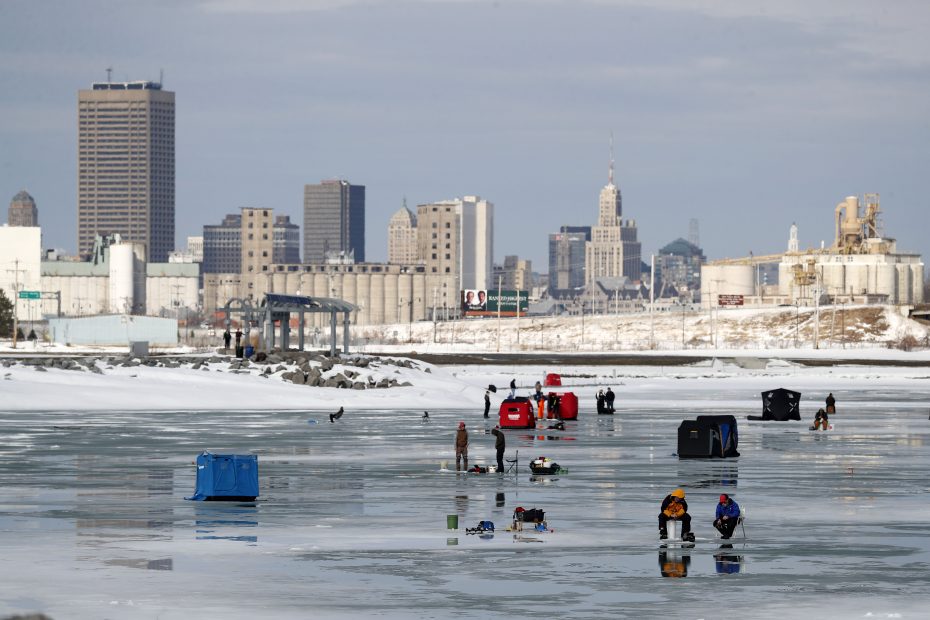 No one's suggesting this winter has been as easy as the winter of 2011-12, when only 37.6 inches of snow fell at Buffalo Niagara International Airport.

And March has arrived as wintry as a January.

But the winter blues haven't hit so hard this winter.

“We’ve had lots of warmups in between, which melted up all the snow,” said Lynn Peacock of Town of Tonawanda. “You haven’t had to worry about pulling around corners and not being able to see around the snow because it’s melted.”

Peacock ventured to the Southtowns with her husband, Dwayne, last week – along with dozens of other wintry weather gawkers – to grab pictures of themselves in front of the hills of Lake Erie ice chunks in Hamburg.

Surely, those in the Southtowns have had a long, hard winter, right?

“Not really,” said Kathy Hens of Hamburg. “It’s been up and down. Just a little colder.”

The weather service stats bear that out. There have been five sub-zero temperatures this winter, compared with three during an average winter.

Reynolds, the weather service meteorologist, called this winter's weather pattern "progressive." There would be a ridge of warmer conditions in the West and a trough of colder air in the East, then they'd switch.

"We'd get a good snowstorm and then it rained right on top of it," Reynolds said.

Last winter, there were only five snowmelts between the time snow first stuck to the ground on Dec. 7 and the end of February. The stretches you could not see your grass lasted 12 days, 21 days, 10 days, 3 days and 13 days, respectively.

When you think about long, cold, snowy winters, the most recent one that comes to mind is 2014-15.

That winter spawned the early-season November storm that crippled much of Western New York from central Erie County southward. The warm-up melted off the snow the following week. It was one of just four breaks in the snow cover that year.

The snowpack – which grew as large as 26 inches thick during the middle of Buffalo's coldest February on record – persisted from Jan. 6 to March 24. That 77-day span remains the 10th longest on record in Buffalo.

After a week without measurable snow on the ground at the Buffalo airport, last week's storm left behind 5 inches, and almost 2 more inches fell Monday with more on Tuesday.

So, the snowy landscape could stick around longer than most stretches this season.

Weather service forecasts show temperatures for the next several days will remain below normal.

"I'd say the first half of March will be cold," Reynolds said.

After that, temperatures are forecast to be above normal. In fact,  it could be in the low 50s on Sunday. And that may be a good indicator that the second half of March will be like much of this winter for snow cover: It won't last long.