The Erie County Federation of Sportsmen’s Clubs, with roots dating to 1940, held its annual awards and recognition banquet at Kloc’s Grove in West Seneca on Saturday night. The club paid tribute to current and past conservation leaders, and there was plenty of clapping and back-slapping as it honored awards recipients from 2018.

One of the group’s founding fathers was Stan Spisiak. He was president from 1949-51, when it was called the Erie County Sportsmen’s Alliance. His environmentalist attitude was a catalyst that spurred the clean up of the Great Lakes. In 1966, he challenged President Lyndon B. Johnson to visit Buffalo and see how terrible the pollution had become in the Buffalo River and Lake Erie. The president’s resulting visit was a pivotal point in the cleanup of our area’s natural resources.

The Stan Spisiak Conservationist Memorial Award this year went to Lake View's John Jarosz, who is from the same type of environmental mold. As an active member with the Niagara Musky Association, his club handle is “Mr. Conservation.”

Jarosz's list of accomplishments is incredible. He has been involved with grants totaling nearly $250,000 for projects including Fish Attraction Structures in the East River, an acoustic telemetry study involving muskellunge, a tagging study involving muskies, protection of habitat on Strawberry and Motor islands and many more. 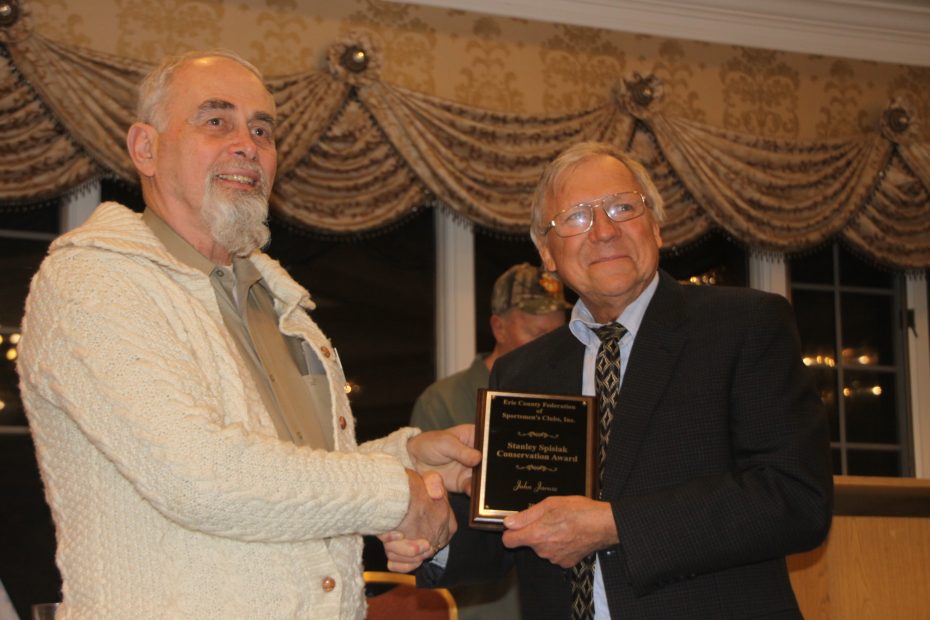 “I don't look at this award as something that happened once because of a few projects," Jarosz said. "It's a product of almost 50 years of my life, even though, never in my wildest dreams, did I ever expect or want any award."

He grew up in Lackawanna and he remembers the steel plants and the explosion of slag hitting Lake Erie. He remembers when Spisiak brought in LBJ to show him how bad things were.

“I was in junior high and it was a presumed fact that the Buffalo River was dead. When I got out of the Army in ’71, I attended the College of Forestry in Syracuse for 2 1/2 years. I ended up transitioning into engineering, where I worked for many years, learning the skills I would eventually need for this fishing club.”

Jarosz also is a member of the Niagara Relicensing Environmental Coalition. He will be the first to say he didn’t do this on his own, having a tremendous support base through his fellow musky chasers. Not coincidentally, the Niagara Musky folks received special recognition at the dinner because the organization will celebrate its 25th anniversary this year. It’s a passionate group that makes a difference when it comes to habitat, research and healthy fish populations in the Niagara River.

Jarosz has a favorite saying: “Everything is connected.” Many would agree. 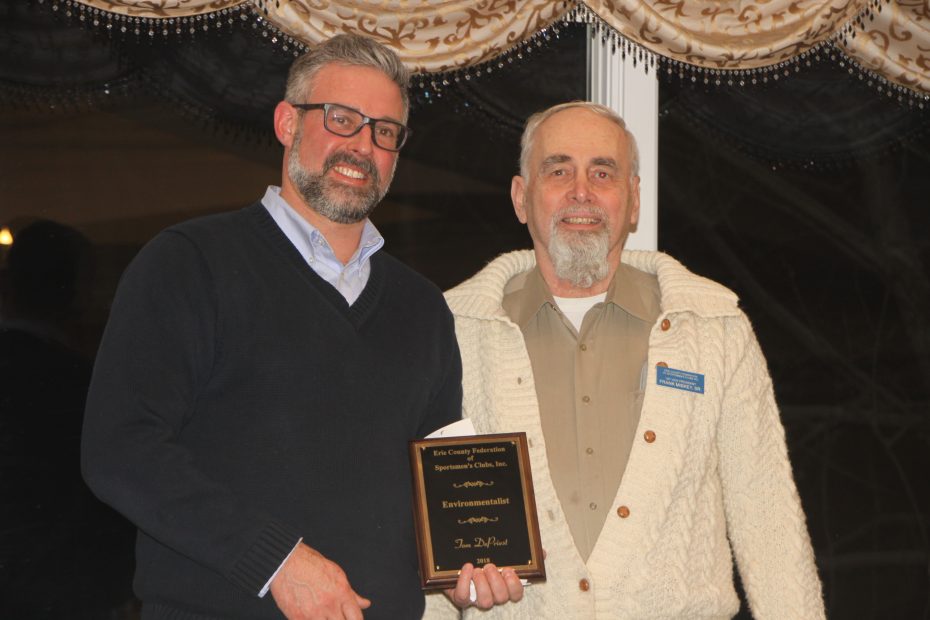 Environmentalist of the Year – Timothy DePriest of Amherst, Niagara River Habitat Ecologist with DEC’s Division of Fish and Wildlife Resources. The 14-year DEC employee was recognized for his habitat work in the Niagara River, including the restoration of Strawberry and Motor islands, the Spicer Island habitat enhancement project, the recreation of Frog Island, a common tern project and construction of several Fish Attraction Structures in the river.

Paul Stoos Memorial Volunteer of the Year Award – The late Paul Stoos of Buffalo was the consummate volunteer for the federation and many affiliate clubs. When he passed away last year, the group named this award after him. It was appropriate that the person that they honored was Tom Fischer of Depew. He’s a go-to guy on hunter education, fundraisers, pheasant releases, working the Erie County Fair, Sport and Travel show staffing and more. He’s an important cog of the federation, too, serving as a club delegate, director and sergeant-at-arms. 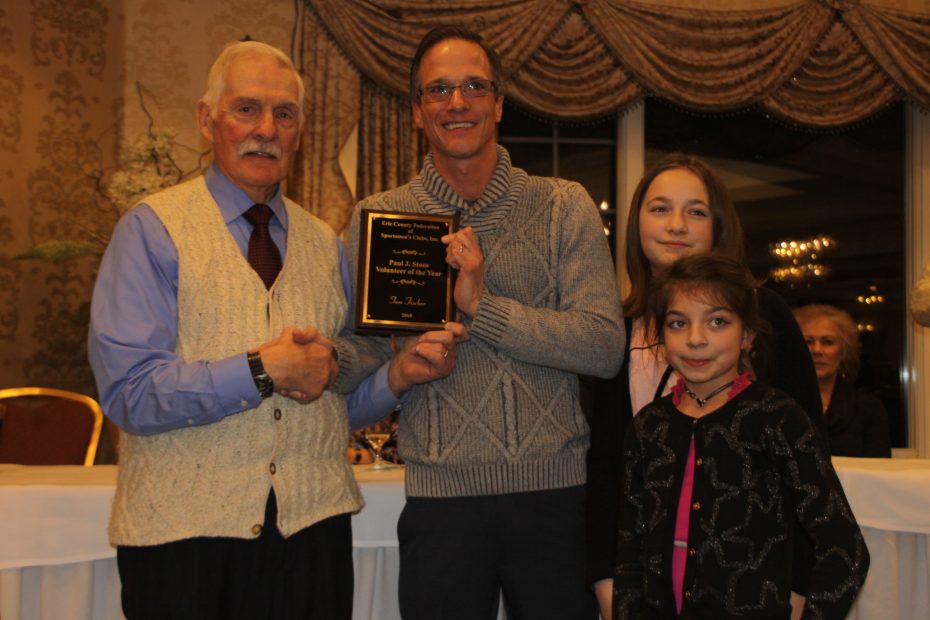 Club of the Year – Lake Shore Volunteer Fire Company Sportsmen’s Club of Hamburg. What started as a small club with 24 members has grown to 140 members involving eight fire companies. Members help run nine hunter education classes a year, educating 350 students annually. They assist with the Teach Me to Fish programs at Chestnut Ridge and Tifft Nature Preserve. The group helps with National Hunting and Fishing Day by teaching the use of crossbow, 4-H pheasant stocking and fish stocking in local streams. And they do all of this besides their volunteer function of fire protection and first responders. 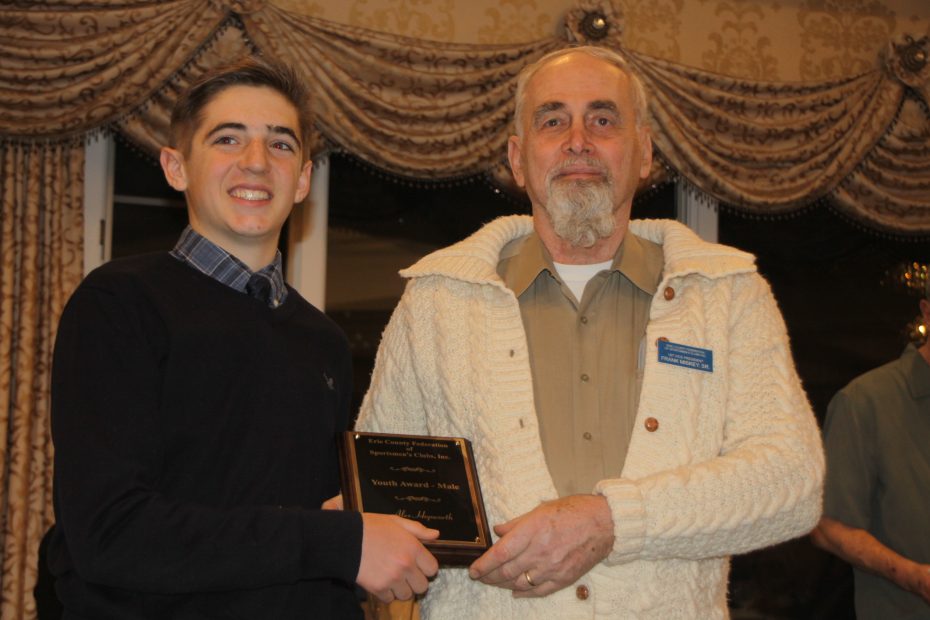 Youth of the Year – Alex Hepworth of Williamsville. The 16-year-old is an active member of the Lake Erie Chapter – Fly Fishers International. He volunteers for the Ray’s Kids Day Program, teaching all aspects of fly fishing. His drive and commitment to conservation allowed him to be selected twice for the Bill Canfield Fly Fishing Camp in Hancock and he will attend the DEC Summer Conservation Camp at Pack Forest in the Adirondacks this year. He is a member of the fishing club at school and is a member of the track, soccer and wrestling teams.

Lifetime Achievement Award – Joseph Fischer of Cheektowaga. Fischer’s calling has involved all things piscatorial. He is the longtime chairman of the Erie County Fisheries Advisory Board, involved with the Fish Committee of the New York State Conservation Council, and is a delegate and treasurer for the statewide organization. He is an ambassador of our local sport fishery.

Public Servant Award – Dave Rosner of West Seneca. For more than a decade, he has volunteered with the Lake Erie Chapter of Fly Fishers International, serving all positions of the executive board. He is chairman of the group’s Ray’s Kids Day. His new endeavor is that of project leader for Project Healing Waters in Batavia, a group that teaches fly tying and fly fishing to disabled veterans.

Dedicated Service Award – Bob Schafer of Elma. Schafer has been active with the Elma Conservation Club since 1974. He remains active in club operations and activities. Early on, he was co-chair of the Trap and Range Committee. He has served on the board of directors, secretary, vice president and president. 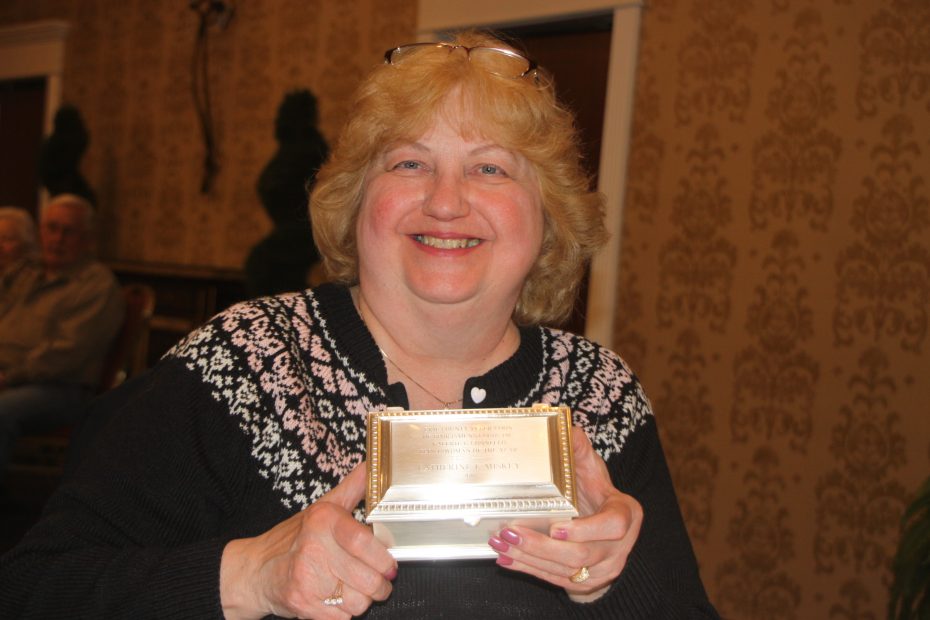 Cathy Miskey of Elma was honored with the Valerie Gonnello Sportswoman of the Year Award. (Bill Hilts Jr./Buffalo News)

Valerie Gonnello Sportswoman of the Year – Cathy Miskey of Elma. Her first love is “scouting” as a Cub Scout leader, Boy Scout counselor and Girl Scout counselor. Her second love is training and working with Brittany dogs, serving as secretary and treasurer of the Niagara Frontier Brittany Club. She assists with the Erie County Hunter Education Program and assists with the Erie federation’s annual banquet. She even had time to harvest a 4-point buck during the archery season last year.

Legislator of the Year – Erie County Legislator John Mills of Orchard Park. He was instrumental in getting the federation a $5,000 grant for kids fishing clinics. He worked with the federation on the grant funding process and he helped secure $1.2 million grant for improving Sturgeon Point Marina.

Special president’s awards from Jeff Jondle – Joe McAdams of Lancaster; Chuck Godfrey of Cheektowaga; and Frank Miskey Jr. of Lancaster, all unselfish workers for the good of the federation.