The first time I ate dinner at Coco, Maura Crawford’s ode to French standards like coq au vin, steak frites, and buckets of mussels with more fries and aioli, it was 2013.

Seven plates, I decreed, griping about dim lighting and languid service that might have suited namesake Coco Chanel, but didn’t leave me time for dessert.

Two days after the review was published there was a box on my desk, from Maura Crawford. Inside was just a large saucer with a note: “The missing plate,” which is the classiest complaint I have ever gotten.

Nearly six years later, the neighborhood has grown up around it, or should I say grown back. The block, now a foothill of the Medical Campus, is much more suited to the sign on the corner: Main Street. 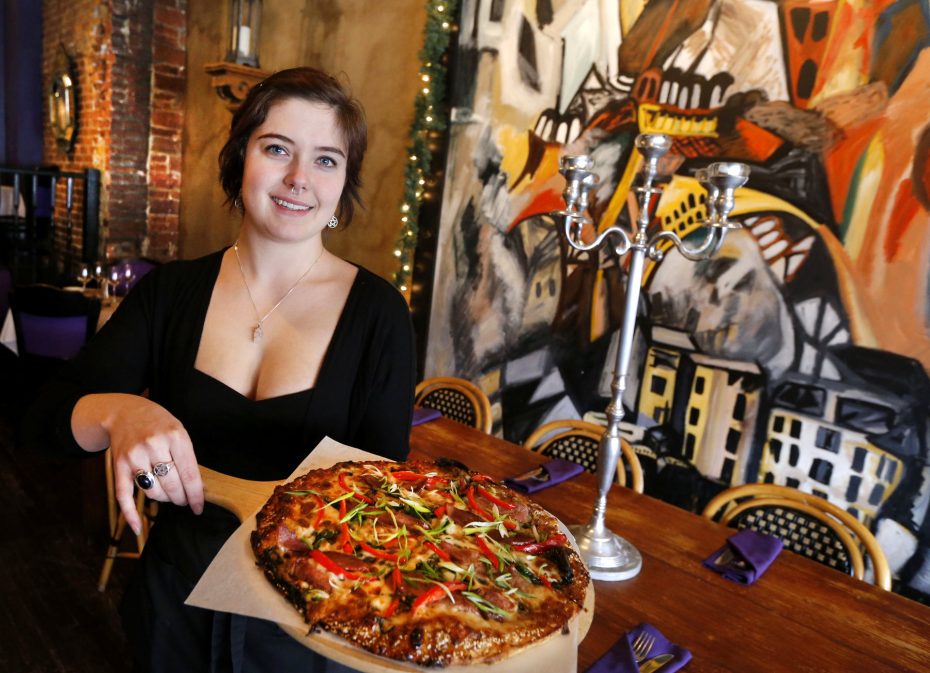 Inside, the décor has stayed the course. A long bar backed with wooden-pillar-framed mirrors, with comfy chairs for diners. The main room, overseen by a plateau of tables in the back, is clad in exposed brick and maroon paint. Amid high-top tables and banquettes, with an unobstructed view of the massive psychedelic Eiffel Tower mural, our four-top had enough elbow room that the full house didn’t feel cramped.

The menu has been tinkered with around the edges, but its heart is still resolutely French. Newish choices include a French onion burger ($17) with Gruyere and caramelized onions, and pappardelle pasta with mushrooms, leek, and spinach ($16) for a vegetarian entrée. 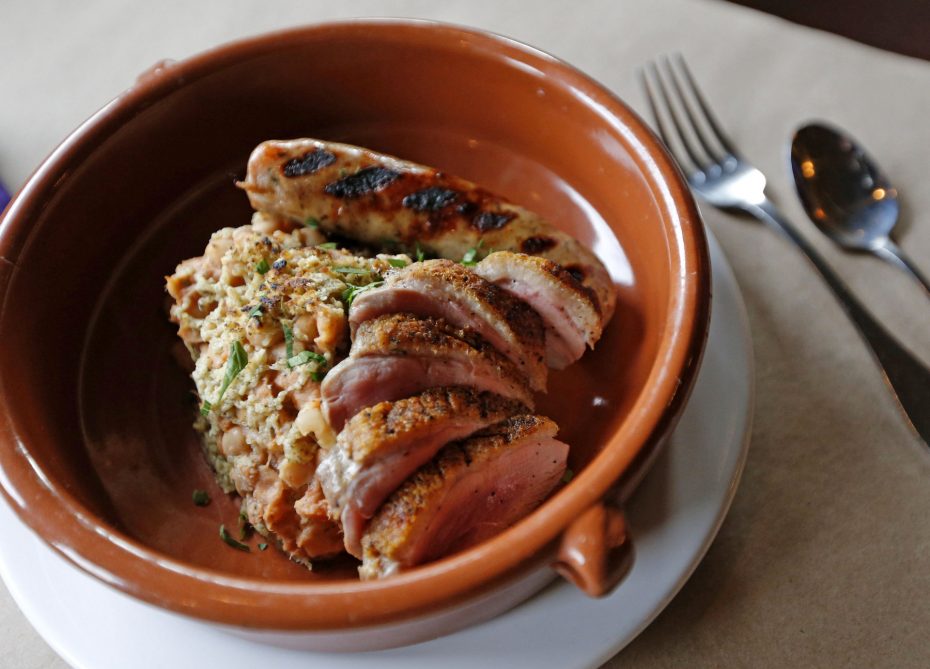 But the mussels remain, and I was feeling shellfish, so I asked for a bucket Portuguese style ($17), steamed with matchsticked chorizo sausage, smoked paprika, garlic, fennel, coriander and lemon wedges to squeeze over it all. A ramekin of crispy fries came alongside, spiked with a sprig of fragrant rosemary, and sunshiny lemon-garlic mayonnaise for dipping. Fortunately bread turned up, in a sort of lace stocking no less, so we had some way to exploit the potent broth. (I would have used a straw.)

A vichyssoise soup du jour ($5) was accented with a single-bite-sized toasted ham and cheese sandwich, which I would have liked in adult sizing. The soup was potato puree pleasantly lightened with broth and milk, but short on leek or other allium notes.

Venison terrine ($12) was an engaging rustic pate with chunks of deer meat in a coarse matrix of pork and liver dotted with prunes, wrapped in bacon, roasted and sliced. A couple slabs arrived with properly toasted crostini, and cornichon, mini-cucumber pickles. Fennel tuna loin ($13) featured rosy-hearted slices of fish crusted with toasted fennel seed, black pepper and more. They rested on a swoosh of earthy saffron chickpea puree, alongside bright shaved fennel salad, and the emerald filigree of fresh fennel fronds. 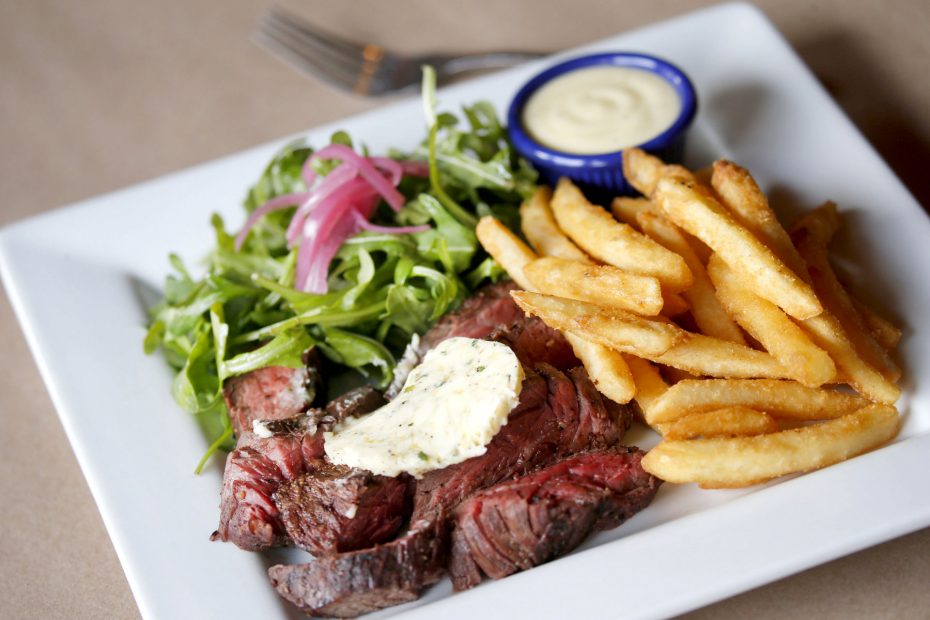 Duck confit ($28) served up basic French with a duck leg poached in its own fat until the meat was spoon-soft, then crisped in a pan until its skin was crisp as a saltine cracker. Roasted potatoes, diminutive carrots and well-browned Brussels sprouts completed the plate.

The steak frites ($26) was textbook, too, starting with an emphatically crusted fist-sized hunk of beef, sliced to show its medium-rare core. A disc of compound butter shot through with shallot, herb and spice melted over the top. The fries were crispy and there was more of that aioli, plus dressed, peppery arugula greens.

The chicken in mustard sauce ($22) looked good, too, when it landed in front of me, but I didn’t order it, so the plate was removed, untouched, to meet its fate elsewhere. 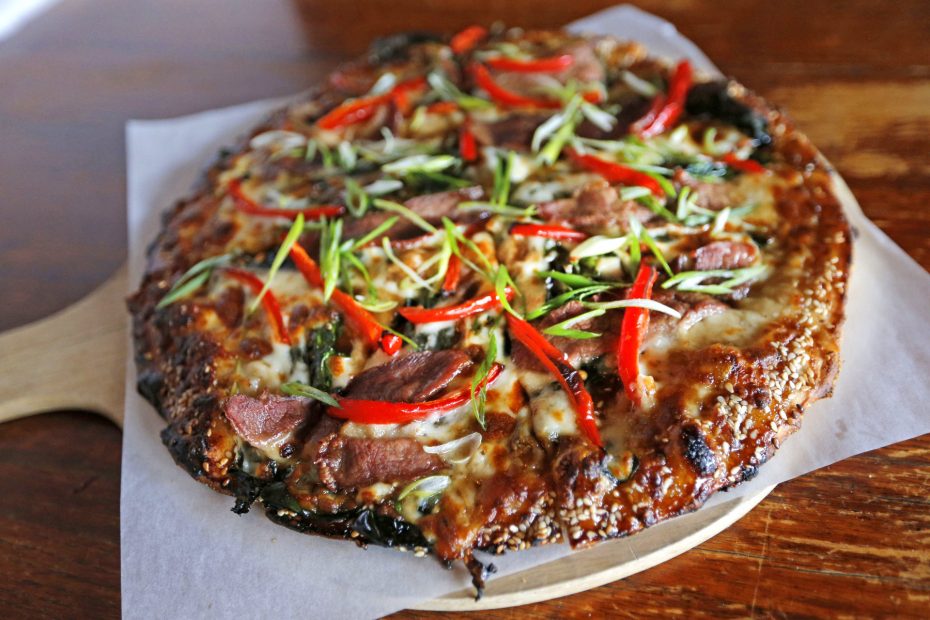 Lamb Bolognese ($20) veered over to Italy with a thick ragu, its lamb essence huskier than beef, especially when bloomed in red wine with plenty of diced carrot for support. Heart and sole ($25), filet of sole wrapped around an artichoke filling, got a boost from a preserved lemon sauce, but was pale in flavor.

Perhaps the least French bite of the evening was duck pizza ($20), gone Asian with hoisin, the Chinese barbecue sauce, and red bell pepper. I wanted more than one slice of duck breast per slice of pizza, but I couldn’t argue with the sweet-salty synchronicity. 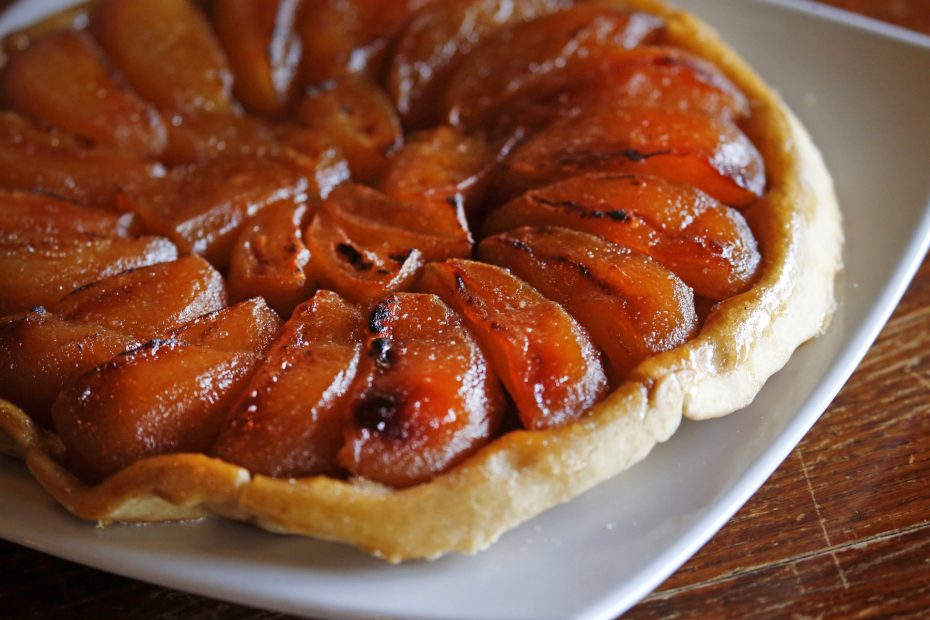 Service was personable, with a diner’s wince at a cocktail prompting the server to get a second and make sure it pleased.

Desserts ($8) included tarte tatin with caramelized fruit, malva pudding, a deeply buttery uber-moist date cake, and my favorite, the salty caramel chocolate pudding crowned with whipped cream and a judicious dab of dark fruit in the form of a cassis (black currant) sauce.

Crawford’s place has built the kind of momentum that reads as casual swagger. With classic moves and a confident wiggle here and there, Coco serves an experience as timeless as a little black dress.

Gluten-free options: most of menu including pasta, pizza and dessert 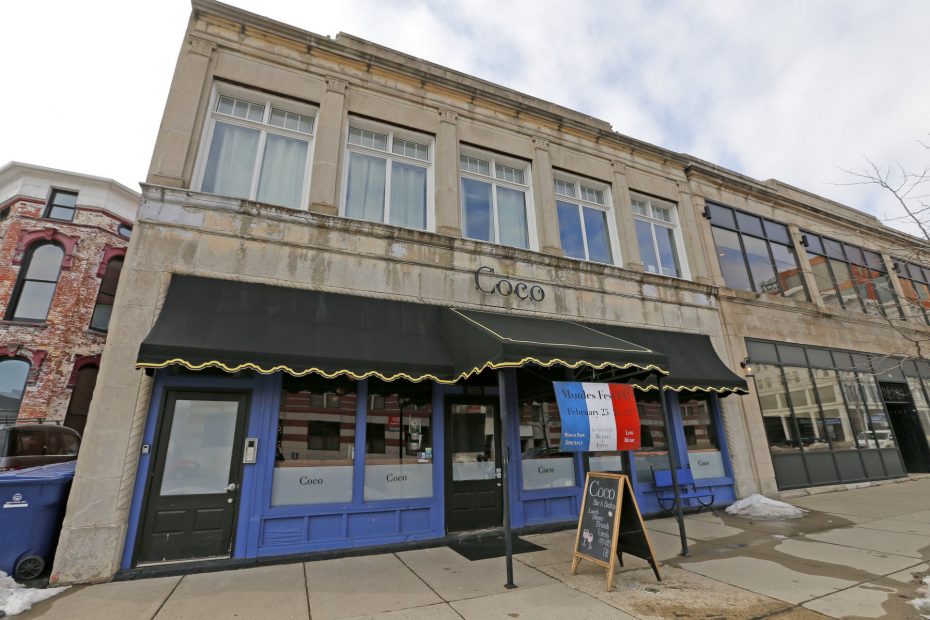