By 1983, Talas had already earned a reputation as a killer melodic hard rock band with an arsenal of memorable tunes lent towering status by the unbridled virtuosity of Kenmore native Billy Sheehan’s bass playing. In Buffalo, Sheehan was already a legend by that point, but even in the Capital District, where I was living and going to high school, the Talas album “Sink Your Teeth into That” was an all-but-constant soundtrack at small gatherings and bonfire parties alike. (I still have the vinyl copy I cut class at Christian Brothers Academy to purchase at the long-gone World record shop in Albany.)

However, as strong as the original Talas trio - with guitarist/vocalist Dave Constantino and drummer/vocalist Paul Varga – had been, the “new” Talas that emerged in the summer of 1984 with the release of “Live Speed On Ice” represented a stratospheric leap. Sheehan was the only original member left, and he had assembled a band that ably bridged the gap between the heavier jazz fusion and prog rock of the 1970s and the melodic heavy metal that would define heavy music in the 1980s. With singer Phil Naro, drummer Mark Miller and guitarist Mitch Perry, Sheehan was cooking with jet fuel. In my circle of would-be internationally famous rock musicians – we dreamed big back then – drummer Miller and guitarist Perry became particularly favored sources of inspiration. We wore out the grooves on our “Live Speed On Ice” vinyl, and our cassette copies of the album were never too far out of reach.

Sadly, this lineup of the band didn’t last long, and Sheehan would go on to massive success with David Lee Roth’s band and as a member of Mr. Big. It’s a thrill that Sheehan is coming home with an updated version of the “Live Speed on Ice” band – Naro and Miller are on board, with guitarist Kire Najdovski filling Perry’s shoes – for a show at 8 p.m. March 14 at the Riviera Theatre (67 Webster St., North Tonawanda. Tickets are $20.

Though he’s revered for his contributions to Rick James’ punk-funk progenitors the Stone City Band and his later forays into virtuosic hard blues and rock, Alyn Syms is apparently eager to be avoid being pigeonholed. For his latest project, he’s turned his focus toward a more languid, laid-back sound he describes as “acoustic guitar with a medieval flair,” as represented by his new collection, “Camerata.”

Syms comes from a musical generation where broad stylistic diversity and a willingness to forge new sonic hybrids were viewed as positive endeavors, despite the challenges such approaches might pose to listeners content to be spoon-fed, genre-wise. It’s not surprising to learn that  though his considerable chops as a guitarist are what earned him his 2016 Buffalo Music Hall of Fame induction, Syms is concentrating on his skills as a composer and songwriter, employing the guitar as a means, not an end.

For his concert celebrating “Camerata,” slated for 7 p.m. March 12 at the Aurora Theatre (673 Main St., East Aurora), Syms will spend the first half of the show performing his new pieces on piano. 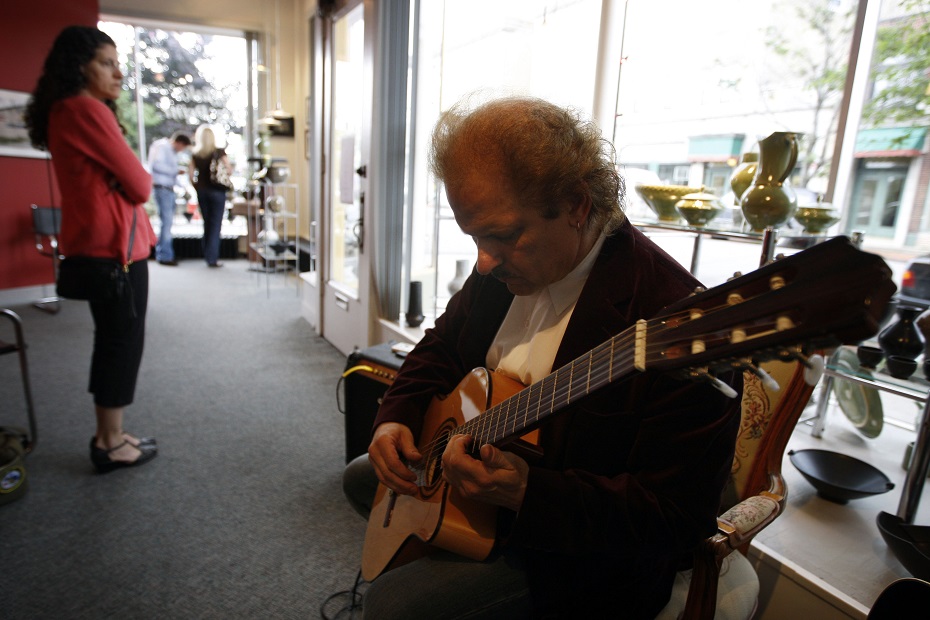 “In 1980, I headlined a concert with my band, ASG, at Shea’s Buffalo Theater and we played to a sold-out audience,” Syms says in a press release announcing the Aurora Theatre show. “I’m looking forward to performing at the Aurora Theatre in the same tradition. I’ll play selections of my newest music from ‘Camerata’ on the keyboard and then… play selections from ‘Black Forest’ and my other works,” which, Syms notes, have been praised for their “lush orchestrations and inspirational melodies” by no less a personage than Buffalo Philharmonic Orchestra Music Director JoAnn Falletta.

Syms will also include a section of ASG tunes, rounding out the show with the rock-oriented music that earned him his initial reputation as a towering figure on the Buffalo music scene.