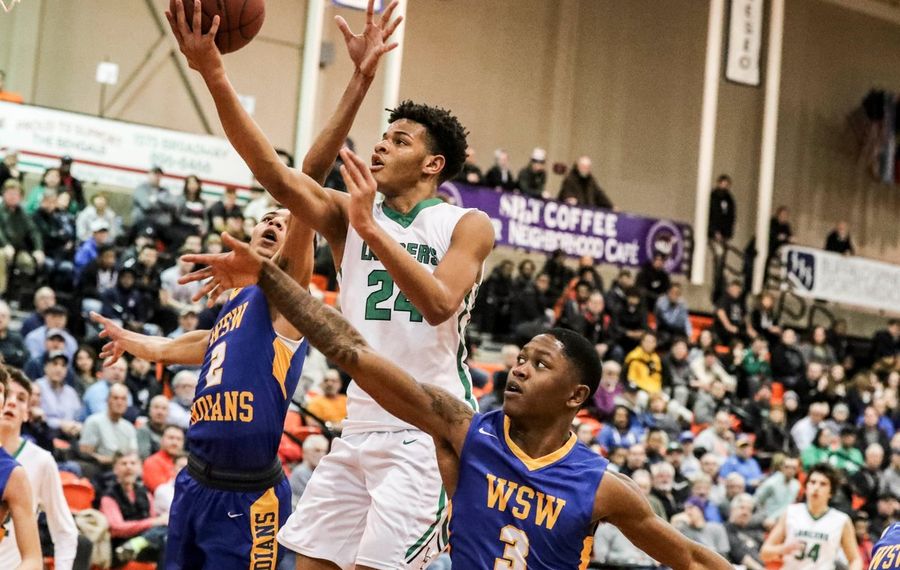 The team has been an early arrival at the Buffalo State Sports Arena throughout Championship Week, checking out as much basketball as possible -- indulging in the sounds and highlight plays all while waiting for its opportunity to entertain the masses in attendance.

The good times rolled on for the Lancers Tuesday night. There are no more boys basketball games slated at Buffalo State, but Lew-Port advanced to the next stop of its playoff journey – Greece Athena High School.

The Lancers are heading to the New York State Public High Schools Athletic Association Tournament for the first time since 1978.

They punched their ticket to Far West Regionals/state quarterfinals by grinding out a 59-47 win over defending champion West Seneca West in the overall Section VI Class A final before an estimated crowd of 2,000.

Freshman Roddy Gayle scored a game-high 20 points that included another "oh my" dunk that got a rise out of the fans, senior Trent Scott had 18 and eighth-grader Jalen Duff connected on three of Lew-Port’s seven first-half three-pointers.

“It’s special,” said Lancers coach Matt Bradshaw. “It’s the first time since ’78. It just baffles me. When you get a ninth-grader and an eighth-grader, most coaches will say maybe in a few years we can make a sectional run. We’re making a sectional run and now a state run when they’re in eighth- and ninth-grade. It’s pretty special. We’re enjoying it.”

Lew-Port (21-3) will face either Pittsford Mendon or Pittsford Sutherland at 2:30 p.m. Saturday at Greece Athena High School in suburban Rochester. The Section V Class A final between the Pittsford schools is Wednesday night.

“It feels great,” Scott said. “There’s a lot of momentum going into regionals. ... We work hard together in the gym and it’s paying off.”

The big pay-off for Lew-Port came in the first quarter, once it switched to a trapping defense while trailing, 7-3. The Lancers scored the next 14 points. Gayle began the binge with a baseline jumper and then hit a layup that tied it. Then Scott got into the act with a steal and layup. He followed that with back-to-back threes – the second following a steal by Jacob Kasbaum. Lew-Port sank four three-pointers during a 25-12 first quarter with Scott draining three.

“Trent played well,” Bradshaw said. “It’s two games in a row. He’s a senior. His goal was to get us as far as we can go this year.”

The Lancers pushed the lead to 34-20 midway through the second quarter on a three-pointer from Jack Bernstein. When Duff buried his final trey in the final seconds of the period, the Lancers had a comfortable 41-29 lead at the break.

While the offenses for both struggled during the second half, Gayle delivered a highlight with a baseline dunk – his third dunk of championship week. This one was special because he kind of lost his grip but still threw it down on a helpless West defender.

“The ball slipped out of his hands, he was able to control it and throw it down,” Bradshaw said. “He amazes me every day. He’s a 15-year-old kid, and the sky is the limit.”

Adrian Baugh scored 19 to lead West (13-12), which came up with stops it needed during the second half in order to mount a comeback but struggled to make baskets.

“Just a tough night offensively and they just did enough in the first half for separation,” Indians coach Des Randall said. “Not too many people expected us to be here and we got here anyway. We’re still Class A-1 champs and out of everything we have been through this season to be in what I guess you could call the state sweet 16 is a huge accomplishment.”