Little about the Albright-Knox Art Gallery's outdoor courtyard, a desolate and often snowswept plaza at the center of a bustling museum, seems suitable for a community meeting space.

With understated entrances, a few austere pieces of sculpture and one lonely tree, the courtyard's architectural message seems to say "look, don't touch" — not "come in and hang out."

But that is likely to change as the gallery takes steps to convert its cold shoulder of a courtyard into a covered indoor town square, as part of its $155 million expansion and renovation project.

The gallery held a public meeting Tuesday in McKinley High School to gather community feedback about the proposed space, a key part of its attempt to put a public face on a private structure.

In an effort to cast a wider net than some of its past public meetings, the gallery enlisted a task force of about 25 people representing diverse communities from across the city.

Prior to Tuesday's meeting, the group met and brainstormed ideas for how to program and configure the new space. The gallery sent out a separate survey about the space for those who couldn't make the meeting, which asks participants about their favorite public spaces in Buffalo, activities and programming they'd like to see and how often they attend entertainment events. 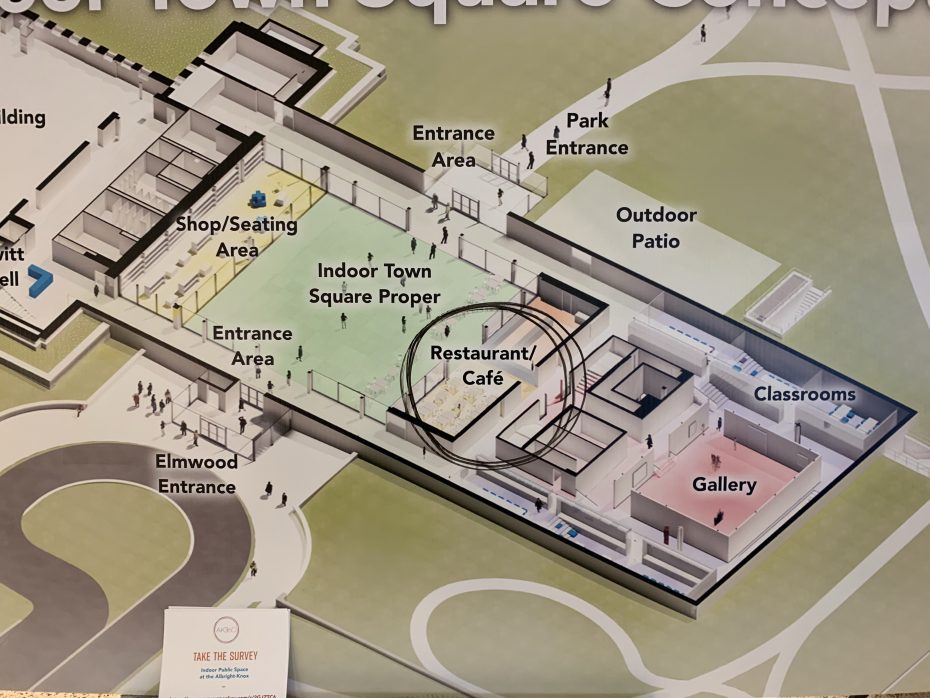 A rendering shows the potential layout of a new public space in the Albright-Knox Art Gallery's former courtyard with areas for a restaurant, shop and educational space. (Colin Dabkowski/Buffalo News)

The Gordon Bunshaft-designed courtyard, gallery officials have long said, is one of the more challenging spaces in the gallery – both because of its exposure to the elements and the exclusionary message it sends to visitors.

At a time when the museum is repositioning itself as a welcoming space for the entire community, gallery leaders see the courtyard as emblematic of a less inclusive period.

"It's this sacred internal space that is meant to be looked into, but maybe not ventured into," Joe Martin Lin-Hill, the Albright-Knox's deputy director, told The News last year. "This is a lot of space right at the very, very heart of our campus. It needs to read as a space that belongs to the public."

The gallery's original plans for the space were more dramatic. They called for blowing out the entire space into a grand entry hall, above which a new, glass-walled gallery would float.

But those plans were scuttled after an outcry from preservationists and architectural historians, who opposed dismantling what they consider a pristine and important piece of period architecture.

Last year, the architectural firm OMA and lead architect Shohei Shigematsu released new plans calling for the courtyard to be covered in order to accommodate visitors in all seasons. The new structure will have an artist-designed glass ceiling, according to task force member Sam Magavern.

Rita Hubbard-Robinson, who is leading the task force charged with collecting ideas about the new space, said the notion of a community meeting place that functions in all seasons was exciting for Buffalo.

"It's the idea that there’s a space that you can go to beside the mall and the library in the winter that is peaceful," she said. "We want this to be a place all people feel welcome."

Those who want to contribute their ideas for the new public space can click here to fill out the survey.