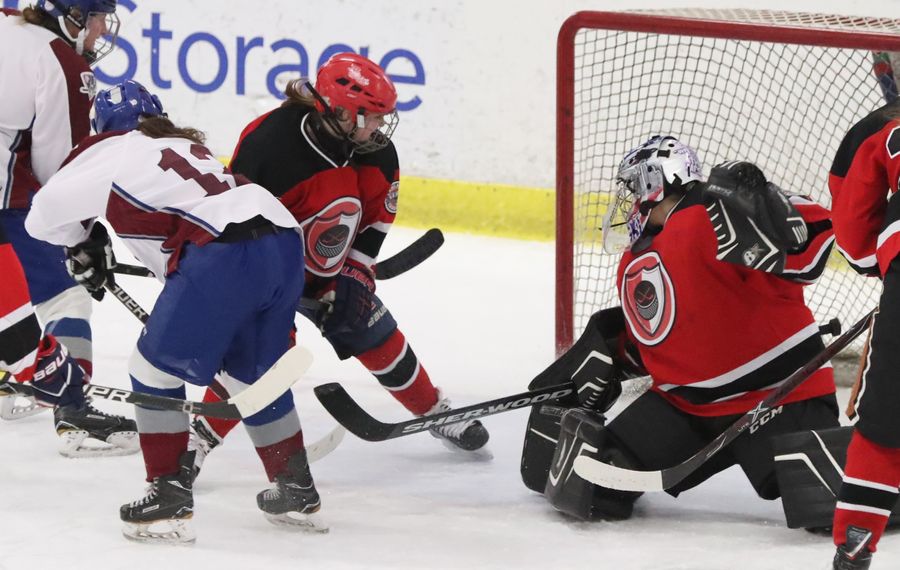 Since day one Keegan Shanahan has just wanted to prove her worth.

She has done that and then some.

It marks the first time in Girls Fed history that a team has three-peated as Fed champs.

"No one’s ever done it so it obviously feels amazing."

After winning the trifecta of sectionals, states and Fed last season FLOP came into the 2018-19 season with the mission of defending all three titles. Those hopes were dashed three weeks ago after a heartbreaking overtime loss to eventual state champion Williamsville in the Section VI championship game.

FLOP regrouped and came back with the resolve to defend their Fed title and end the season on a positive note.

"That’s one of the things that we told the seniors and the girls that have been in this program for a while," FLOP head coach Bob Klimowicz said. "How even though we didn’t get to states we can do another thing this year that no one has ever done and that’s win three (Fed titles) in a row. That was important."

Shanahan opened the scoring with a power play goal that was set up by Brooke Becker and Jessica Peters.

Shanahan set up Jenna Dickson (assist) for the second and Gabby Messing gave FLOP what appeared to be a commanding 3-0 lead.

But sophomore Morganne Dee gave LID some life with a power play goal of her own with 25 seconds left in the first period.

Morgan Zaccarine pulled LID within a power play goal in the second period. It was another much needed morale boost for LID after being unable to convert on two previous power play opportunities.

Brooke Becker’s third point of the night was the insurance goal FLOP needed to clinch the game. Becker and Mary Kromer both had two assists.

FLOP goaltender Maggie Spyche picked up her 30th career win in the game, she’s now 30-2-3 for her career.

While Shanahan might not be FLOP biggest star, no one has been hotter in the second half of the season, especially in the playoffs, as she notched one multiple goal game after another.

After scoring two assists as an eighth grader and 10 points last year, Shanahan had a breakout season this year as she tallied 13 goals and 20 assists.

"When I started out in eighth grade I didn’t really expect to play that much because you’re young," Shanahan said. "But as a sophomore on the first line it means a lot to me. I just wanted to show everybody that I could do it and that I could make a big impact on this team."

Having that perfect chemistry with linemates Kromer, a junior, and fellow sophomore Gabby Messing has helped Shanahan blossom into an impact player who has unlimited potential.

"There’s nothing but up for Keegan," Klimowicz said. "I was look at her career stats and how far she’s comes from her eighth grade year to this year – having (33) points. Its phenomenal."

FLOP played a strong defensive game, especially in the first as they clogged up the middle of the ice and kept LID’s Jersey Phillips from making any explosive offensive rushes.

For LID, though the season didn’t have the final outcome that they wanted, the fact they made it to the Fed title game, beating state champion Williamsville in the semis, shows the incredible strides forward this program has taken after losing its first 57 games.

"As we said when we came off the ice you gave a very good team a very good game," LID head coach Dave Santoro said. "You didn’t fold up the tent and go home early when they got the three goal less on us. You came back and gave them an effort."