It's 11:11 p.m. on Feb. 21. Canadian rock band Arkells finished a show in the Town Ballroom, ending an album-spanning set strong with a cover of ABBA’s "Dancing Queen," showering the audience in vibrant confetti.

This was the end - for most of the band members - of their first of two nights in Buffalo where the group would play two sold-out concerts and two pop-up acoustic sets. The musicians arrived in town that morning, hours before soundcheck, making time for some of their local favorites like coffee (not Tim Hortons), barbecue and sushi.

Earlier in the show, long before "Dancing Queen," frontman Max Kerman didn't do the thing where he mentions a city's name to rile the audience up and establish familiarity. He reassured the audience that he knows our city by name-dropping his favorite neighborhoods and restaurants. Allentown, Gabriel’s Gate and the bar where you can get “a box of Rolling Rock for 10 bucks” (Frizzy’s) make his list.

When bands and celebrities come to town, I'm often curious about where they go. Do they just do the show and leave? Do they head to Allentown and fly under the radar? Do they unknowingly visit a bar or restaurant locals hate but it's the first recommendation on Google Maps?

Arkells know their way around Buffalo. At least, well enough to have favorite spots that are just niche enough to impress a seasoned Buffalonian.

The next day, at their first acoustic show inside Misuta Chow's Instafamous pink staircase, Kerman filled the pink stairs with music as his clear vocals belted out "Hand Me Downs" to a handful of lucky radio contest winners from 103.3 The Edge.

Upstairs, between sushi and skee ball, the five band members took time to chat about their time in Buffalo, usual dining and nightlife spots and how they've noticed the city grow. At the concert the night before, Kerman said Buffalo is basically a part of Canada and the band's knowledge of the city proved that for them, it might as well be.

“Every time we come back, there’s always something new here in town,” Kerman said. He wore his own merch, a shiny black Arkells jacket and fought off a stomach bug. A few people whisked him away for a band shot in the pink staircase.

Guitarist Mike DeAngelis wrapped up a session of Iron Man Off Road, a racing game in the arcade at Misuta Chow's. “Do you know that game?” I asked him. “Oh, very well,” he said.

When DeAngelis arrived in Buffalo the previous morning, his first stop was Spot Coffee, where he said he feels like he's in an episode of "Friends." “The one next to Jim’s Steakout, right across from the Starbucks,” he said, talking about the Spot on the corner of Delaware and Chippewa. “It’s very '90s but, like, in a comforting way.”

Misuta Chow's pink staircase hasn't garnered any fame across the border, apparently. DeAngelis hadn't heard of Buffalo's infamous staircase before booking this show, but he understands the appeal. “I get it. It’s very pink."

Instead of shying away from photo attractions, Arkells tried to make their own, DeAngelis said. It's on Queen Street in Toronto. A graffiti painting depicts Kerman with his arms and hands extended outward into peace signs, wearing a black jacket painted with a yellow lightning bolt on the back and fringe hanging from the arms. “It sorta works,” DeAngelis said.

Keyboardist Anthony Carone had a slightly different breakfast, he recounted while digging into a plate of Japanese appetizers. He got into town around 10:30 a.m. and at a friend's recommendation, headed straight to Dinosaur BBQ for some brisket, ribs, mashed potatoes and corn. “Probably too much meat for breakfast but it was really good,” he said. “I’d like to spend more time in Buffalo just kinda exploring.” 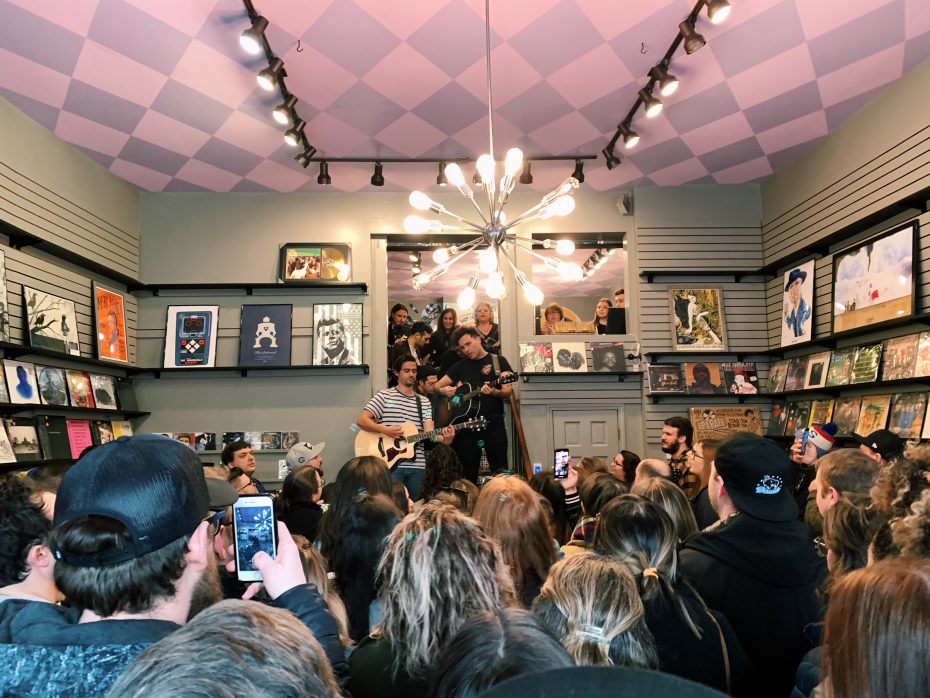 After soundcheck for the first Town Ballroom show, the men headed to a restaurant they know well.

“We go to Seabar pretty much every time we’re here," DeAngelis said. They sat in a room in the back with Town Ballroom co-owner Donny Kutzbach. DeAngelis ate a poke bowl and drank unfiltered sake.

Carone also had a "really fresh" poke bowl, which was just light enough for him to eat before playing, since he tries not to eat much before shows.

Carone noted downtown Buffalo's relatively recent food-and-drink boom, recalling a 2012 visit, where Buffalo felt "whatever." Now, when he left his hotel that morning, the sun was out and downtown bustled with people.

"Now, it’s like totally different," Carone said. "I feel like before, it was a little barren, you know?"

The band met just across the border at college in Hamilton, Ont., a city that's seen its own recent resurgence. “It’s the same kinda thing. I think Buffalo kinda got here a little quicker. Hamilton is still kinda working on it.”

As bassist Nick Dika and drummer Tom Oxford played skee ball with a couple of fans, they mentioned a few steadfast spots from previous visits. 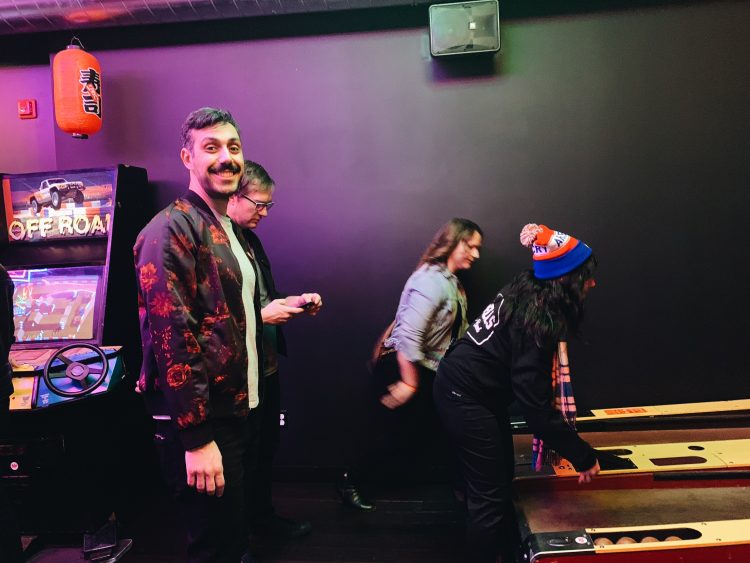 For Buffalo's claim-to-fame chicken wings, both Oxford and Dika agree on Gabriel's Gate.

Though there is one more contender. Dika couldn't remember the name, just that it was on the corner near Coca-Cola Field. After his friend Googled it for him, he was 99 percent sure it's Union Pub.

After Thursday's show, most of the group went straight to bed. Carone, however, visited a few of his favorite craft cocktail bars for a nightcap with some of the other tour members.

He began with an old-fashioned at Toutant, as they were closing up.  “One drink and that’s it,” the bartender said. “They make really good cocktails there," Carone said. He followed it up with a Manhattan at Buffalo Proper, which is one of the bars the whole band frequents on visits.

Seeking one more drink before bed, he asked the bartender for a glass of whiskey on the rocks as a nightcap. When the bartender served him the drink, he was shocked by its generous size.

"If we went to Toronto, it would be like..." He searched around and pointed to a nearly empty drink on the table. "It was honestly half a glass,” he said. “And I was just like, ‘Well, I guess I gotta drink it now. That American free-pour really puts you over I think,” he said.

As for other Buffalo bars, one stood out to Dika, though he couldn't remember its name.

“Is that the bar where the grill is part of the bar? You know what bar I’m talking about? They literally have like an open-face grill," he said. “That’s The Pink," I said and mentioned the Allen Street bar's famous steak sandwich.

“The sandwich was good, actually," Dika said. It's no surprise that they've visited The Pink. Known for its rock 'n' roll music and patronage, many bands stop by the dive.

Oxford and Dika remark that Ellicott Street behind Town Ballroom didn't have businesses like Toutant and Seabar when they started coming to Buffalo.

But when Oxford, who lives close to the city in Fort Erie, mentioned his favorite thing about Buffalo, it wasn't a trendy new restaurant or cocktail bar. It's an answer we all like to hear, to stroke our egos and solidify our city of good neighbors title. “Moreso just the people, I mean, we have so many friends here now."