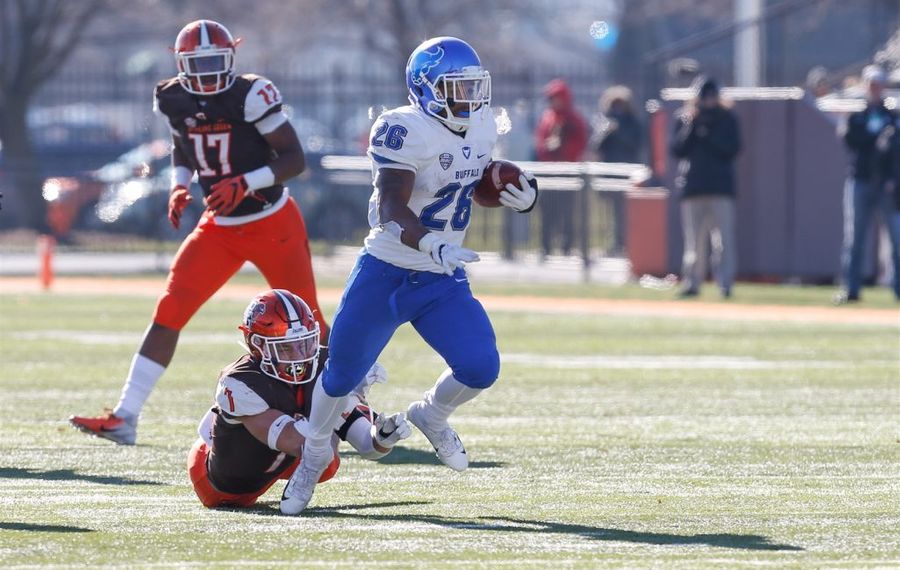 The offseason wasn’t forgiving for the University at Buffalo football team.

The Bulls finished 10-4, won the Mid-American Conference East Division championship and lost to Troy in the Dollar General Bowl on Dec. 22, but within three weeks of the end of the season, the Bulls lost quarterback Tyree Jackson to the NFL Draft, then lost wide receiver K.J. Osborn, who transferred to Miami (Fla.). This, in addition to the departure of 20 seniors or fifth-year seniors.

Now, there are a new set of questions the Bulls face as they prepare for spring workouts, which begin Sunday.

The Bulls need a new quarterback, and must fill the holes left by NFL hopefuls and graduate transfers. They also need to develop a group of wide receivers that have little FBS experience; fill spots in the secondary, with the losses of Cameron Lewis and Brandon Williams to graduation; and replace linebacker Khalil Hodge, who is third in school history in tackles.

The Bulls will host their spring game April 12 at UB Stadium, and open the season Aug. 29 against Robert Morris, an FCS program.

Here are five questions that face the Bulls in spring practices:

Jackson’s departure for the NFL leaves a gaping hole, as the Bulls lost a quarterback who passed for 3,131 yards and 28 touchdowns in 2018. As important, Jackson had intricate knowledge of the offense and experience in it.

UB coach Lance Leipold told The News earlier this month that he doesn’t expect to have a starting quarterback named by the conclusion of spring practices. But the Bulls have at least four options: Kyle Vantrease, Dominic Johnson, Matt Myers and incoming freshman Trevor Bycznski, who will join the Bulls in the summer.

Vantrease, Johnson and Myers have a combined 67 completions for 379 yards and two touchdowns in three seasons, but only Vantrease and Johnson have seen any substantial playing time in the last three seasons.

Who will be UB’s top wide receivers?

Like quarterback, this is another void the Bulls need to fill, with the departures of Johnson and Osborn, and the possible departure of Tyler Mabry. UB brought in five wide receivers and a tight end in its 2019 recruiting class, including junior-college transfers Larry Rembert and Daniel Lee, who bring much-needed experience to the position.

Who will replace Khalil Hodge at inside linebacker?

Hodge also heads for the NFL, and Matt Otwinowski will likely be Hodge’s successor at inside linebacker.

Otwinowski had 31 tackles in 14 games in 2018, including a season-high 10 against Delaware State in the season opener, and his teammates and coaches regard him as one of the more cerebral players in UB’s defense.

Max Michel and Ja’Varius Harrison also will contend for the opening at middle linebacker.

What is the Bulls’ biggest change in the offseason?

Lewis Caralla became Georgia Tech’s strength coach days after the Bulls' bowl game. Part of the Bulls' jump to 10 wins in 2018 was credited to Caralla's work with the players.

Matt Gildersleeve replaces Caralla. Gildersleeve, who was previously at Akron, is already training the Bulls as they prepare for spring practices.

Leipold needs to round out his staff after the departures of Daryl Agpalsa, who joined the Northern Illinois staff in January as offensive line coach, and defensive ends coach Roc Bellantoni, the new linebackers coach at Washington State.

Will the Bulls be in contention for the MAC East Division and the MAC Championship this year?

The better question is, will the Bulls become bowl eligible for a second year in a row?

Judging solely by the personnel losses, no.

But there’s no clear, early favorite to win the MAC East, though Ohio returns quarterback Nathan Rourke, and Buffalo’s conference schedule will test the Bulls early; UB faces MAC East opponents Miami (Ohio), Ohio and Akron from Sept. 28 to Oct. 19. Winning these games will be vital if the Bulls want to win the MAC East.

Brett McMurphy of WatchStadium.com released his way-too-early bowl projections earlier this month and did not list the Bulls among the conference’s five bowl teams.