Commanding of stage, voice, and intersong banter that includes a smattering of adult humor, Michael Bublé played a packed KeyBank Center Wednesday night, part of a tour supporting his 2018 release, "love," his 10th. After a publicized starting time of 8 p.m. sharp (and no opener), the show got rolling after a half-hour delay, ostensibly due to the persistent regional snowfall.

Fans were still taking their seats as the first notes – from the grand piano onstage – began the first song of the tight two-hour concert.

Thirty-four musicians, seated on four tiers, began "Feeling Good" as an onstage circular monitor above undulated with red shimmering shapes. Bublé emerged in his signature blue suit, making his way down the staircase, singing, as the monitor's imagery morphed into a giant moon behind him. This arresting imagery flowed into a show highlighting what is known as The Great American Songbook, beloved classics, with a handful of Bublé pop compositions interspersed.

Bublé prefers the word "friends" over fans, he would say during the show, as "Fans sounds like fanatics." But the several handmade posters of intense endearments, "friends" straining to brush the hand of the performer as he glided along the stage's long runway many times throughout the show, and the never-waning vibe of excitement revealed abundant, unabashed fanaticism. 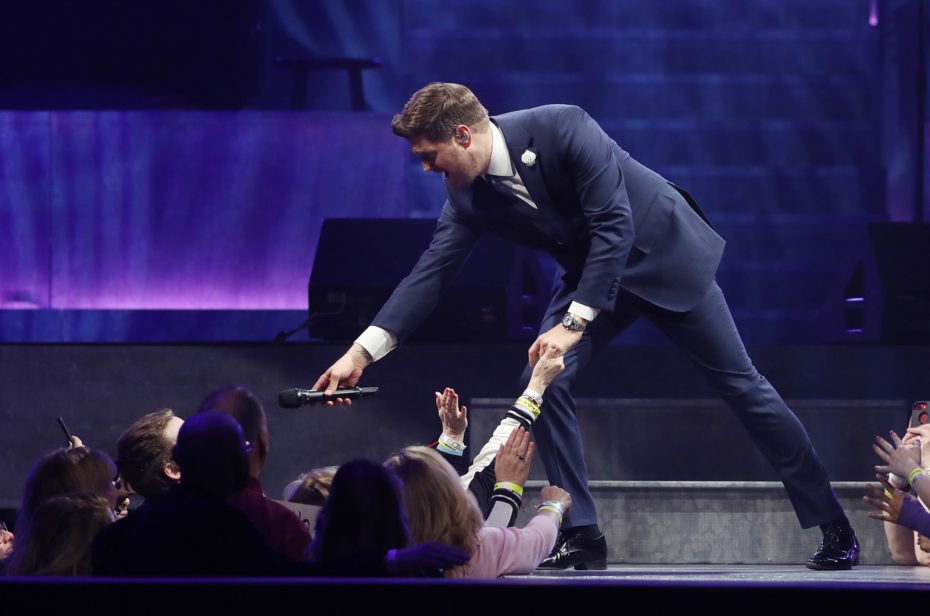 The thunderous-in-parts opener (recorded by Nina Simone in the 1960s) led into jaunty Bublé original "Haven't Met You Yet." It would be a while before the next song, Rodgers and Hart classic "My Funny Valentine," as Bublé had much to say.

"Hi, Buffalo. Wow! Wow! You guys are amazing. Let me start by saying how happy I am to be here after a long time away. I can't believe that you're here … you are some hardy people." Additionally, he considers Buffalonians "The best of Canada and the best of the United States, smushed into one cookie," listing a love of hockey as a plus. He joked that his third baby had spoken her first words a few days ago: "Jack Eichel."

Eight musicians and backup singers joined him down on the runway on a compact stage at the center of the venue for the show's frenetic peak: Louis Prima's swinging "Buona Sera Signorina," and paired "Just a Gigolo"/"I Ain't Got Nobody," into Chuck Berry's "You Never Can Tell" as hanging lanterns bobbed up and down (attempting club aura). The singer invited everyone to stand and dance.

"Thank you for being bold and beautiful," Bublé said before a thundering "Cry Me a River," recorded by Julie London in the 1950s, strings and horn section shining.

A photo montage from the band's day in Buffalo, and a captured moment of audience member Nicole doing a short, sweet version of Leonard Cohen's "Hallelujah" earlier in the show (and Bublé's surprised reaction) led into three songs: his original megahit "Everything" between the well-chosen classics, Rodgers and Hart's "Where or When," and Brenda Lee-crafted "Always on My Mind."

*Read more concert reviews by clicking the Story Topic, below.