After decades of debate, Gov. Andrew Cuomo is impatient for some new ideas to replace the Skyway.

Cuomo on Thursday said he wants the state to hold a national design contest to seek alternatives to the elevated highway. If approved by legislators, this year's state budget would include $100,000 as a top prize for the competition.

"The Skyway really was built at a different time for a different city in a different economy and we should be looking big and thinking big," Cuomo told political figures and business leaders gathered at the Millennium Hotel in Cheektowaga on Thursday. "And let's come up with an alternative design for the Skyway and let's not just — let's stop thinking about studies and pondering and 'what if.' "

Officials hope the Skyway contest will attract architects, engineers and designers from across the country. The competition would take about six months, after which a panel of experts would review the ideas and seek the public's input, Cuomo said.

The governor and other elected officials say removing the Skyway, a key connection between downtown Buffalo and the Southtowns, is long overdue. They said the Skyway closes down too frequently, costs too much to maintain and keeps the public from using the city's waterfront.

"It's part of the new greater vision for the City of Buffalo. We have to access our waterfront," former Buffalo Mayor Anthony Masiello said afterward. "We have to modernize our city. But you also still have to move people."

Planners and others have long sought the removal of the Skyway, which was built in 1956.

The cost of demolishing the existing elevated highway and building whatever alternative option is chosen is unknown at this point but sure to be expensive.

A state Department of Transportation study in 2008 found that extending the useful life of the elevated highway would cost up to $125 million.

The DOT agreed to do a review of the Skyway in 2016. That study, which got underway in September 2018, will determine the long-term viability of the Skyway and look at a number of alternative transportation options if it is taken down.

In the meantime, the agency is spending over $30 million on a major Skyway deck rehabilitation, maintenance and painting program. Work on the eastbound side finished last year. The westbound work is expected to be completed in 2020. 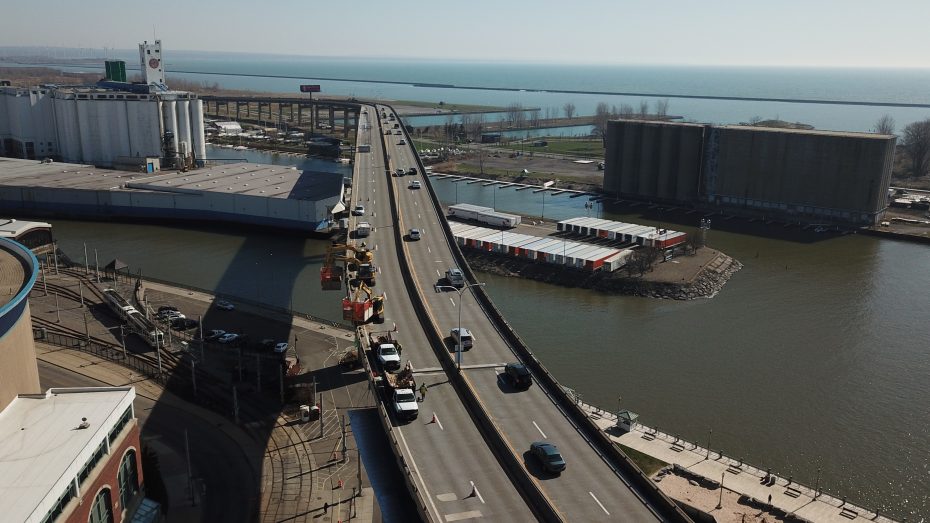 Construction on the Skyway in April 2018. (John Hickey/News file photo)

Rep. Brian Higgins, D-Buffalo, has made tearing down the Skyway one of his signature issues and has pushed the DOT to speed up its study to make sure any removal and replacement is eligible for funding from a large federal infrastructure bill he expects to pass this year or next.

“This is the first time in almost 60 years that Buffalo will now have alternatives versus just rehabilitating a bridge that is structurally deficient and is just outdated,” Higgins said.

“That bridge would never be approved for construction today, because it’s dangerous. It doesn’t have shoulders. When a car breaks down, you’re down to one lane. There are all kinds of safety problems associated with that,” he said.

A DOT spokesman said the national design contest is separate from the department's study but should complement its ongoing review.

State Sen. Tim Kennedy, D-Buffalo, who this year took over as chairman of the Senate's Transportation Committee, also favors replacing the Skyway.

Cuomo said the question of how to pay for the project will be addressed after the competition and the selection of a winning concept. The governor declined to say when he would like to see demolition and construction begin but said he hopes the collection of design ideas would take about six months.

Cuomo didn't indicate if he consulted with the DOT before making the announcement, or how the design competition fits in with the department's lengthy Environmental Impact Statement study, which is required in order to secure federal funding.

"Let's get the best ideas, let's have a competition, let's give a prize to the winner, let's come up with a new vision for the Skyway and then we will make it happen," Cuomo said.

"The Skyway has been in a state of some disrepair for quite some time. Literally tens of millions of dollars to repair it the right way. We're seeing more and more times when the Skyway has to be closed due to weather for the safety of motorists," Brown said. "So I think this is the right idea at the right time."

The winning alternative could also boost Canalside's status as a tourism draw, said Jonathan A. Dandes, president of Be Our Guest, which has the contract to manage events and concessions at the site.

Also at Thursday's event, Cuomo touted his ongoing efforts to lower taxes for the middle class in the state.

He once again expressed support for making permanent a cap that limits how much governments and school districts can raise property taxes each year. Cuomo said those taxes rose by an average of more than 5 percent annually between 2000 and 2010.

Starting in 2011, Cuomo's first year in office and the first year under the tax cap, property taxes have risen an average of 1.9 percent each year, generating $24.4 billion in taxpayer savings statewide, he said Thursday.

Also, Cuomo said his budget proposal includes another drop in the state income tax rate, something that the state has done several times in recent years.

Cuomo said under this latest phase-in of his income tax cuts, rates will drop to 5.5 percent and 6 percent, depending on income, from 6.85 percent. His office said this will produce roughly $4.2 billion in annual savings for six million filers by 2025.

Cuomo said the tax cuts are, in part, a response to the federal government ending the state and local tax deduction that, according to the governor, unfairly hurts New York taxpayers.