Since the day it opened in 2011, the multi-ethnic food court on Grant Street called West Side Bazaar has given me heartburn. Not from indigestion, but the fear of making poor decisions about what to eat.

It offers more than 100 dishes that channel a dozen cuisines from around the world. So the chance of picking a dud – then watching an eye-popping dish carried by your table – increases exponentially.

What never gave me trouble was dessert. The lotus-flower-shaped coconut-and-sesame cookies sold at the tiny bubble tea kiosk put the lie to the idea that Asian desserts are too weird for Americans. The proprietors, two sisters from Laos, offered savory dishes on special, but nothing stuck.

Last year, the Laotians opened their own restaurant, called Gourmet Lao Foods. I showed up knowing nothing about Laotian cuisine, but after seeing these cooks at work, I was ready to learn. 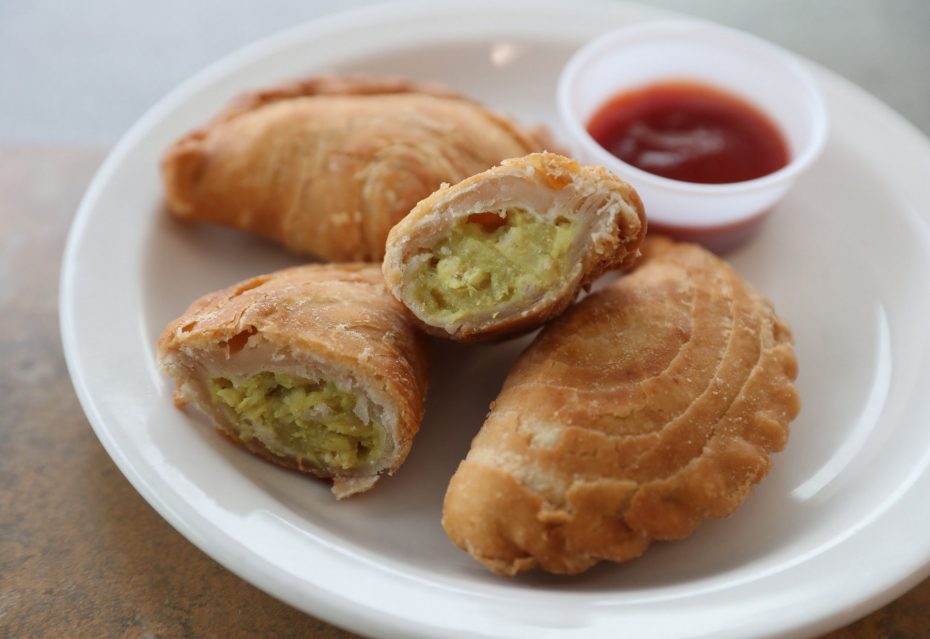 Given their own kitchen, owners Boulivone Serixay and One Thammasithikoun are delivering some of the tastiest Southeast Asian dishes in town, at more-than-reasonable prices. 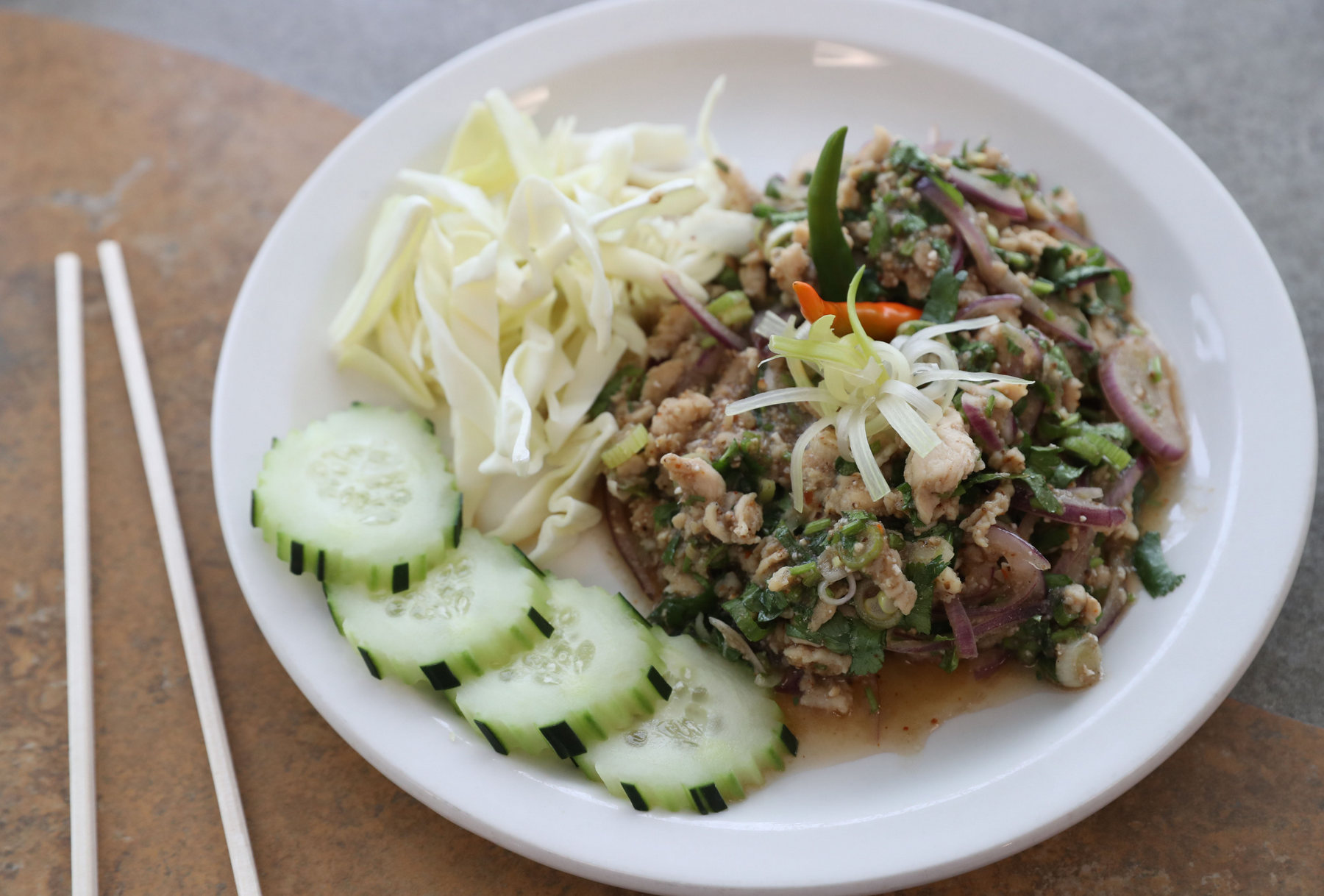 Gourmet Lao Foods' larb is made with either chicken, pork or beef, with red onion, cilantro, scallion, lime juice and chili and accompanied by cabbage, cucumber and either white or sticky rice. (Sharon Cantillon/Buffalo News)

Other Thai offerings were solid, including tom yum soup with seafood ($9.95). The dark reddish-orange broth was redolent of lemongrass and ginger, and with lots of lime and chile, properly sour-and-spicy, instead of the sweet-and-sour versions plaguing local menus. Fresh tomato, red onion and mushrooms were simmered in the stock with calamari, shrimp, and bay scallops, which became slightly chewy, but nothing ruinous.

Rarh nah with pork ($8.25-$9.95) is a Thai fried noodle dish that can be tailored with choice of protein. This one tossed wide rice pasta with Chinese broccoli, and thinly shaved meat or seafood, all swimming in a brown oyster-sauce gravy glossy with cornstarch. A squeeze of the proffered lime wedge helped cut the sweetess, and some of the pasta clumped together, but it was overall acceptable.

Amid a largely competent menu, the Laotian stuff stood out for its simple, focused favors.

If you eat meat, don’t miss the larb ($8.25), a warm meat salad suffused with fresh herbs and lime juice, funky with fish sauce, crunchy with onion, fresh cabbage and toasted rice powder. It’s a Laotian dish also popular in Thailand, traditionally eaten with sticky rice ($2.95) by pulling off a hunk of the rice and using it like a heel of bread to scoop up some of the minced mixture. 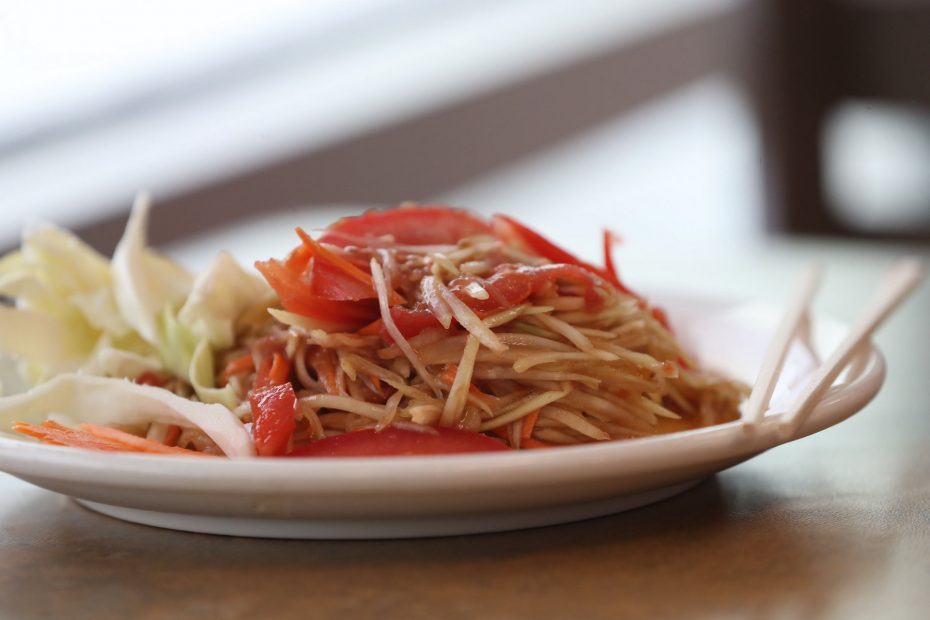 Every people has its chicken soup. Khao puen ($7.25) is Laotian, with noodles and chopped chicken in coconut broth, golden with turmeric and savory with ginger and onion. The gentle disposition and soft noodles below the surface reminded me of Burmese owno koksware, except this Laotian potage contributed crunch with a topping of bean sprouts instead of fried noodles. There’s also red onion and sliced cabbage providing roughage in this heartwarming soup.

Ask for your som tum, green papaya salad ($7.25), Laotian style, and fresh cloves of garlic will be pounded in a pestle with fresh chiles. Lime juice and fish sauce rounds out the dressing for shredded under-ripe papaya, halfway between fruit and vegetable. Stir in some of the coarsely chopped cabbage to reduce the intensity of the spicy shreds. Medium heat was as hot as I would go on this one.

Laotian sausage ($8.25) nets you three sliced links of chicken or pork flavored with lemongrass, herbs and garlic. It’s plenty flavorful, though teetering on the edge of dry, practically begging to be dunked in soup. 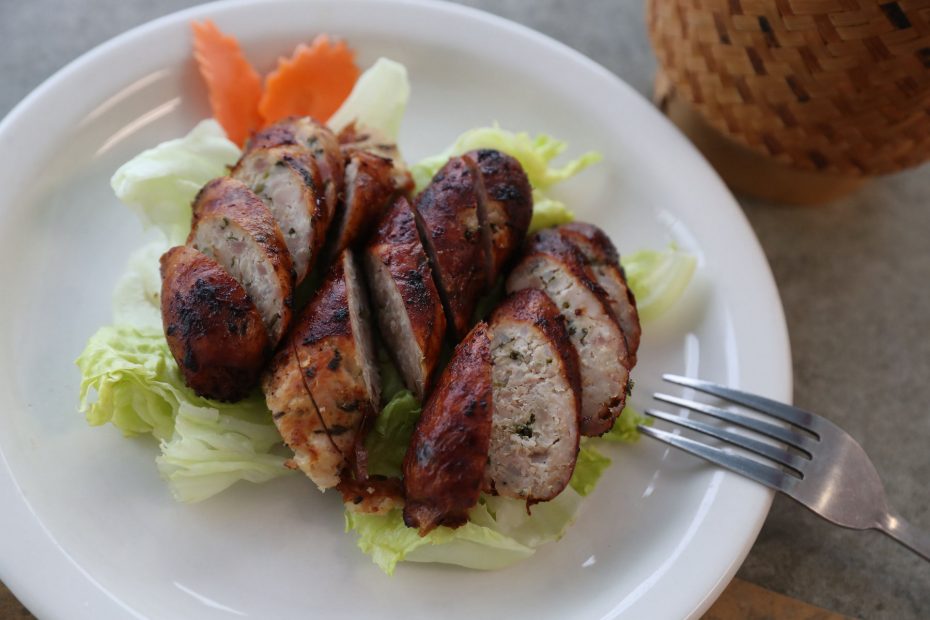 Gourmet Lao Foods' sausage is either chicken or pork, made with onion, cilantro and scallions. (Sharon Cantillon/Buffalo News)

The results are intensely aromatic and casserole-soft. After trying fish and chicken, I was drawn to the former’s ginger cast and meltingly soft texture, while the chicken version’s flavor, dominated by chicken liver, put me off.

If you’re looking for beef or pork stew, consider the Burmese curries ($8.25), chunks of fork-tender meat in a dark, dank sauce of cooked-down caramelized onion, ginger and warming spices. The sauce was thinner than other gravy-like versions, but plenty tasty. 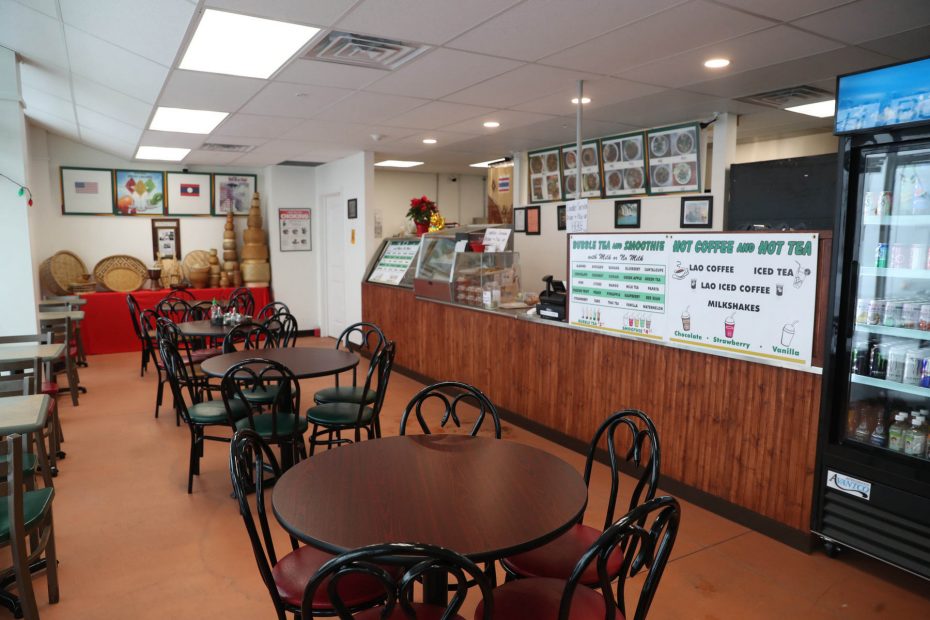 Gourmet Lao Foods opened at its new location at 643 Grant St. They operated at West Side Bazaar for four years. (Sharon Cantillon/Buffalo News)

In conclusion, get some of those cookies, at least (3/$2.25). Coconut batter imbued with black sesame seeds, dipped onto irons and fried for a crispy three-dimensional Southeast Asian dessert riot, should become the Crystal Beach waffle of 2019 Buffalo, N.Y.

The glimpses of Laos available plate after plate in these sisters’ humble restaurant have completely taken the sting out of the term “Laos-y food.” 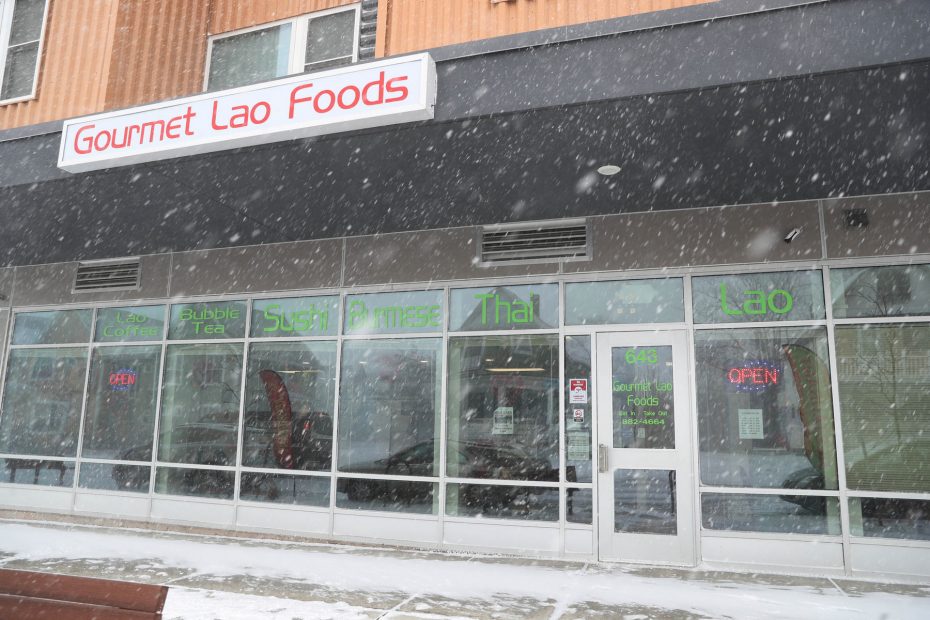