Park School was envisioned to be a scary good team this season moments after it won the New York State Federation Tournament of Champions in March because of its returning personnel.

While only two of the four expected starters wound up returning, reloading on the fly with seniors Noah Hutchins and Quentin Nnagbo leading the way still proved to be a championship-winning formula for the Pioneers.

Hutchins scored 15 of his game-high 25 points during the second half and chipped in five rebounds and two assists to help Park pull away after it went into halftime nursing a four-point lead. Nnagbo grabbed 10 rebounds and scored all eight of his points during the final 16 minutes after sitting part of the second quarter in foul trouble. Sophomore Keonjay Carter had 15 points as the Pioneers beat Canisius for the second straight year in the Cup final.

“Certainly, after the players that were with us last year and not with us this year there were questions regarding the possibility of us getting back here,” second-year Park coach Rich Jacob said. “Thanks to hard work and team work, we found our way. I’m proud. We have five sophomores and a few returners. Together throughout the season we grew and grew and put it together. We’re fortunate to be here and proud.”

The Pioneers might be scary good now if they still had current prep-school players Dan Scott of Oak Hill Academy and 6-foot-11 John Orogun of St. Benedict’s (N.J.) in their lineup. But they don’t and that’s OK.

They have talented sophomores who have grown up quickly with returning first-team All-Western New York player Hutchins serving as the on-court conductor.

"It was a team win, there wasn't anyone particular who did something spectacular," Hutchins said. "We’re a young team but it didn’t matter. We took control of it.”

Game MVP Hutchins nailed a pair of 3-pointers and scored eight points during Park’s 23-point first quarter as the Pioneers never trailed in this one. Park scored 11 of the game’s first 13 points and led 23-11 after eight minutes.

Park led by 14 after two Carter free throws midway through the second quarter. But once the 6-8 Nnagbo left the game with his second foul, Canisius scored the final 10 points of the quarter to head into intermission down 31-27.

The Crusaders (15-11), appearing in their 10th final in 11 years, hung around and appeared within striking distance, trailing 45-38 after three quarters. The Pioneers, who defeated Canisius during the regular season by scores of 64-53 and 64-42, gained some breathing room by switching to a defense with man principles that clogged the middle. Hutchins scored 10 points during the final eight minutes, draining a three early in the quarter that made it 50-40. The lead didn’t dip below 10 after that.

“Noah Hutchins is one of the finest players out of Western New York at least in my memory and I’ve been around a long time,” said Jacob, a Bishop Duffy graduate who spent most of his coaching career coaching at the collegiate level in Western New York. “To have him as the leader certainly makes things a little better for a team and his preparation is second to none. He doesn’t take anything for granted. He plays both ends. He plays unselfish and he’s there when you need him as you saw at the beginning of the game and also in the second half when he took charge.”

“This group is very resilient,” Crusaders coach Kyle Husband said. “The fourth quarter is where I thought we lost a little too much focus. Give them all the credit in the world. They made shots and we didn’t. ... They’re a terrific basketball team.”

A championship outfit, once again.

“It feels great,” Nnagbo said. “We never had doubts in ourselves.” 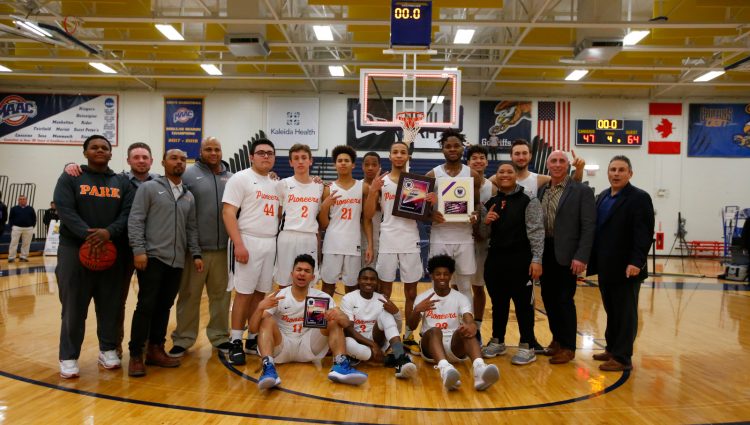 Park celebrates a 64-47 victory over Canisius for the Class A Manhattan Cup, its second championship in as many seasons. (Harry Scull Jr./Buffalo News)