This is what Anthony LaMonte needs you to understand. He is not a real social media guy. Not even close. He does not tweet. He barely uses Instagram or Facebook. He used to work for his family's business, operating parking lots in Buffalo, before he settled into retirement in Fort Erie, Ont.

Last Sunday, amid the windstorm, he had an idea for a video he wanted to share with a handful of close friends.

LaMonte, 59, had a gut feeling that a thick layer of Lake Erie ice would be powerful enough to overwhelm the ice boom, then to move along the Niagara River and hit the banks with such force that blocks of ice that sometimes seemed as big as grand pianos would flip into the air, landing on shore with an impact like the footfall of a giant.

"It's happened a couple of times before," LaMonte said, recalling moments when he watched in awe as the ice rose out of the river and tumbled onto shore. It was a rolling sequence of primal and astounding power, something that had to be seen to be believed, and he hoped for once to catch it on a video.

So he kept his eye on the river as the winds climbed to within range of hurricane force, and he acted on a gut sense once the ice was shoving forward. LaMonte and a friend named MaryAnn climbed into their car. They drove to Mather Arch Park in Fort Erie, south of the Peace Bridge. LaMonte leaped out, holding up his mobile phone as the ice started to jump the wall and pile up in a staggering natural display that resembled overwhelming dominoes.

"I was like a kid in a candy store, like I won the lottery," recalled LaMonte, who was so overjoyed you can can hear him flat-out screaming, during the video. He chose to shout one profanity in particular, a word that follows "holy" and is often associated with astonishment, even as he called for MaryAnn to move the car out of the way. At one point, in sheer wonder at the growing wall of ice, he says:

"That's it. You've got to be here at the exact time. You have like 30 seconds to get it. How cool was that?"

Then he went home and posted the video on YouTube under "Superman/Anthony LaMonte," an association he makes only because Superman was his favorite character when he was a kid. His other YouTube videos, for the most part, had maybe a few hundred views. He figured a handful of people, mainly his buddies, would see this one. 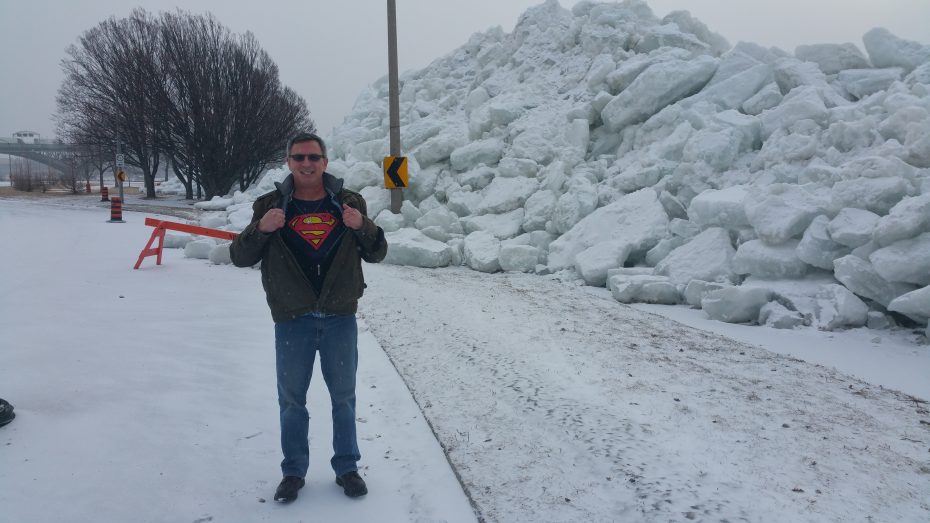 Anthony LaMonte, with the wall of ice. (submitted photo)

Instead, it exploded. The video was picked up by The Buffalo News and many media outlets, including the Washington Post. By Wednesday morning, it had almost 790,000 views and 393 comments. Most people were appreciative of LaMonte's enthusiasm, as summarized by a commenter who refers to himself as Owen's Biophilic World:

"DUDE your enthusiasm for the moment is unsurpassed! I would be so stoked to see a live event like that, too. From a local Niagara guy. Wow."

Other commenters praised LaMonte for the quality of the video. A few irritated viewers, however, expressed frustration or worse at LaMonte for shouting and using that one specific profanity, which they maintain tainted the experience.

Yet LaMonte hopes, if they read this, they will understand.

He was not thinking about going viral, or about people he never met seeing the video. He was thinking instead about friends who know the way he approaches life, friends well-accustomed to a kind of wonder and jubilance LaMonte sums up with one line, verbal punctuation for a video that captures the essence of a Great Lakes storm.