I knocked on the front door expecting the Rev. Norbert F. Orsolits not to answer – or to slam the door in my face when I introduced myself as a Buffalo News reporter and explained why I had driven 45 minutes to speak with him.

I told Orsolits that a man named Michael Whalen publicly accused the priest of molesting him in the late 1970s. I was looking for a response. Orsolits didn't shut the door.

Little did I know at the time, one year ago today, that our brief conversation would help set in motion the unraveling of decades of cover-up of sexual abuse by more than 100 priests in the Catholic Diocese of Buffalo.

Orsolits stepped one foot outside and asked me to repeat the name of the person making the accusation. When I did, Orsolits said he didn't remember anybody named Michael Whalen.

It was an odd reaction. We talked some more. He carefully considered my questions, but didn't give lengthy answers. I didn't immediately take notes because I didn't want to scare him from speaking freely.

At one point, I asked him if he had sexual contact with any minors. He admitted that he had, but that it was consensual, and he never forced anyone to do it. He also told me that he went to Southdown Institute, a treatment facility near Toronto where the Buffalo Diocese sent priests who molested children.

Orsolits never admitted to abusing Whalen, but he didn't deny it. I thought it was important to get a sense of how many kids he molested, but he wouldn't give me a number. So I asked him if it was one boy, or two boys, or three boys or dozens of boys. He said, "probably dozens."

When I took out my notebook, Orsolits got spooked and wouldn't talk anymore. He told me I should speak with the Buffalo Diocese and went back inside.

I hustled to my car and discovered that my iPhone recording feature had shut off and did not record any of the 10- to 15-minute conversation.

I jotted down notes, including the "probably dozens" comment, the only verbatim quotation I was able to use in a deadline story I co-wrote with my colleague Aaron Besecker, who covered Whalen's press conference in the morning.

After the story ran, we soon heard from another man who said Orsolits abused him. The man, James McCarthy, was particularly disgusted by Orsolits maintaining that the sexual contact with minors was consensual and not forced. 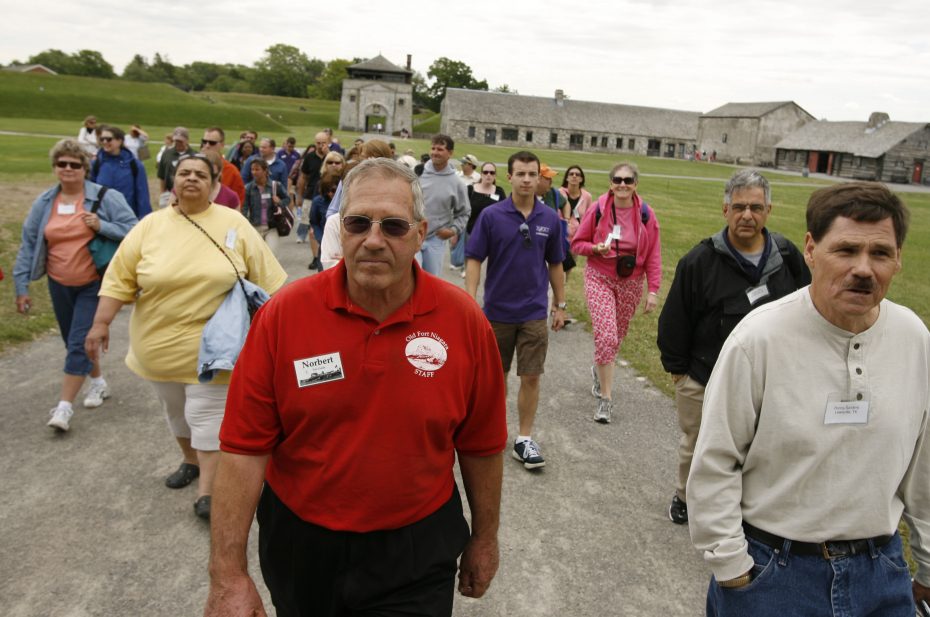 The Rev. Norbert Orsolits, at center in red shirt, volunteers as a docent on a tour of Old Fort Niagara in Youngstown on July 13, 2009. Orsolits told The Buffalo News he had sexual contact with probably dozens of teen boys while serving as a Buffalo Diocese priest. (Buffalo News file photo)

McCarthy and his brother, who also was abused, agreed to go on record with their accusations.

I returned to Orsolits' rural home in the Town of Ashford a few days later and knocked on the door again. He remembered me, and this time invited me inside, cautioning me to watch out for the buckets on the floor collecting water from a leaky roof.

Orsolits said he knew the McCarthy family well, and he admitted that he had sexual contact with the brothers when they were boys.

This time, my recorder stayed on.

I asked Orsolits if he felt bad about abusing them, and his response was strange. Maybe he misunderstood the question. He said: "You know, over the years I really don't, because I mentioned how I was up at Southdowns and in the time that I was there I think a general renewal took place, because I haven't been involved in anything at all since I left Southdown."

I couldn't stay long, as I was on deadline again for another story. I was mostly trying to confirm what the McCarthy brothers had told me and to get Orsolits' response.

I went back a third time, and Orsolits again invited me inside. A noon television news segment with Whalen was on when I arrived.

Orsolits shut it off and said, "You know I've been seeing him on TV."

I asked Orsolits if he recalled Whalen now that he had seen his face. He said no, he didn't recognize him.

After my second conversation with Orsolits, I spoke with a South Buffalo man who said Orsolits befriended him and tried to touch him sexually. The man said he was bigger than Orsolits and fended off the priest's advances.

Orsolits, in our third meeting, remembered the man, who did not want to be identified by name. Orsolits confirmed the man's recollections.

"He would have beat the hell out of me," he said.

Orsolits also recalled the first complaint about him that was lodged with the diocese, in 1978 or 1979, when he was assigned to St. James Church in Buffalo. He said he took a young male parishioner to a bar and "made a pass at him" and his mother complained. The incident prompted a stint at Southdown, he said.

I tried to get Orsolits to talk about why he kept being moved from parish to parish from the late 1960s through the mid 1980s – a dozen parishes in all during that time. He maintained that he didn't know why.

Then, his demeanor suddenly changed.

"Now before I go any further," he said, "I'm hoping what we're talking about isn't going to appear in the paper."

I told him that I was continuing to write about clergy sexual abuse. He wanted our conversation to be off the record. When I didn't agree to that, he asked me to leave and never come back.

I haven't been back since. I tried calling him for this story, but he didn't answer, and I wasn't able to leave a message. Someone called my extension later on and hung up after I gave my name. We don't have caller identification on our News phones, but I'm pretty sure it was Orsolits.

I've spoken with eight men who said Orsolits abused or attempted to abuse them when they were teenagers or younger.

I never sensed any remorse from Orsolits for his crimes. Instead, he maintained multiple times that he was reformed after being treated at Southdown. Orsolits even called my editor Mike McAndrew in October to complain that my stories said nothing about his not having abused children since his Southdown treatment in the late 1980s.

McAndrew asked Orsolits if he felt bad about sexually abusing kids. The priest said: “I did. But I lived with it. I tried to enjoy life.”

Orsolits is 79. He was removed from active ministry in 2004. He told me and McAndrew that he has leukemia and was living on "borrowed time."

Bishop Richard J. Malone said in November that the diocese was preparing a case against Orsolits to be sent to the Vatican for adjudication, but it's not clear whether that means he will be defrocked.

It's also not clear if the diocese has reached out to Orsolits to find out who else he abused. As of late October, Orsolits said the only thing he heard from the diocese was a recommendation that he get a lawyer.

Diocese spokeswoman Kathy Spangler didn't respond on Tuesday to an email query about Orsolits' status as a priest and whether he had provided the diocese with any of the names of his dozens of victims.